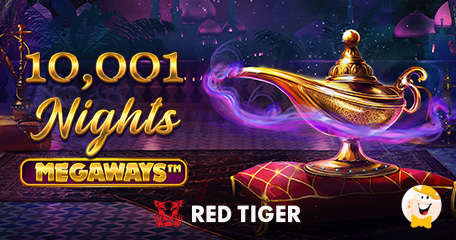 If you thought this year could go without a new take on the collection of Middle Eastern folk tales compiled in Arabic, known as One Thousand and One Nights, make a second guess!

Red Tiger is back this month to continue the Arabian dream with 10,001 Nights Megaways, featuring a decadent display of ornate genie lamps that will take you to the world of Scheherazade herself.

Once you get transported into the world of Scheherazade, look out for Oil Lamps. They can appear anywhere on the reels and fill the Feature Lamps with magic oil. If they are filled completely, the feature gets unlocked and you get a total of nine Oil Lamps to unlock the Mega Wild, a substituting symbol that expands across a whole reel.

The best thing about it is that up to four Mega Wilds can appear on the middle four reels. In addition, they also come with a multiplier whose values range between x2 and x7, applied to all ways with wild symbols.

While the game’s high volatility may put your patience to a severe test, unlocking its Destiny Spins will certainly bring back a smile or two. Fortune may truly smile on players during this stage, leading them to untold riches thanks to the global win multiplier by up to x20 that applies to all win ways.

10,001 Nights Megaways is an upgrade to the original slot from 2020. It follows other recent releases from the same series, such as Big Cat Rescue Megaways, Doggy Riches Megaways, and Pirates’ Plenty Megaways.

The revamped title is packed with a maximum potential of 117,649 Megaways like its predecessors, giving players a chance to challenge their destiny and reach max wins in the range of 10,500x their bet.

“Players are going to be transported back to Old Arabia with this brand new 10,001 Nights Megaways game,” commented James Jones, head of business development at Evolution, the world leader in video-streamed live dealer gaming which purchased NetEnt along with Red Tiger in 2019.

He is particularly excited about the graphics since the development team created a stunning, decadent atmosphere. There is no doubt that the game’s story will hook players right from the start, so if you’re a fan of Genie lamps, jewels, rich colors or the Sultan himself, check out a new thrilling tale from Scheherazade, the famous storyteller of the Middle Eastern collection of tales.

Among the latest games to join Red Tiger’s roster of premium online slots are Wanted Wildz, Gods of Troy, and Bass Boss. The first one to go live is a real western, featuring a group of bandits that’s been plundering the earliest settlements of the Wild West.

The game is set on the outskirts of a small distant town, and players will have to combine bonus spins with random wilds to bring some order back into town! Get ready for a high volatility shooter with 15,000x max wins, 20 paylines, and a 5x3 reel setup optimized for every device!

The other two games will feature all the luxury and mysticism of ancient Greece and an opportunity to show off your fishing prowess, respectively. Stay tuned in August for the official press releases!

“leading them to untold riches thanks to the global win multiplier”

Always a fan of Aladdin and Arabic stories, they fit nicely into any slot, and when it comes from Red Tiger, it has to be the best! Great news.