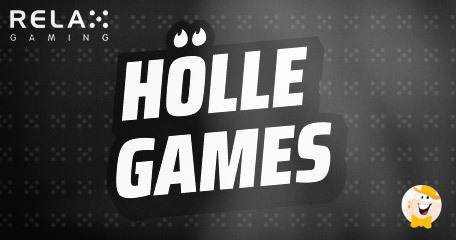 Only days after entering the newly regulated market of Ontario and conquering Italy, Relax Gaming, a popular iGaming aggregator and supplier of unique online casino content added a new studio to its network of “Powered By” partners. This time, the company tied knots with Hölle Games, a German-focused provider of video slots.

As far as Hölle Games CEO and Co-Founder, Robert Lenzhofer, noted, the agreement with Relax will enable them to continue delivering great localized content that resonates with customers. One of the studio’s biggest assets is the Bonus Spin tool, which is compliant with the regulatory requirements of Germany.

Designed with the idea to “Power Your Ambitions,” the “Powered By” platform has so far welcomed more than 40 brands. Hacksaw Gaming, Tom Horn Gaming, Green Jade Games, Playson, Probability Jones, and Skywind Group are just some of the many names capitalizing on the partnership.

Being the newest provider to join Relax Gaming’s fast-expanding network of “Powered By” associates, Hölle will benefit from RG’s unrivaled speed-to-market and technical excellence. On the other hand, Relax will take advantage of Bonus Spin, a cutting-edge tool that softens the tax exposure, without having any impact on player experience.

“The regulated German market is growing at pace, but in order to truly flourish within it, operators need to invest in strong, localized content. Hölle is way ahead of the game in that respect and we’re delighted to partner with such a forward-thinking studio.”

In addition to inventive tool…

…the Berlin-based studio displays an MGA B2B license, has the approval to operate in the Swiss market, and possesses ISO 27001 certificate. Also, its games carry distinctive German names and themes, which is another reason why operators and platform providers interested in conquering the iGaming sector of Germany pick Hölle as a business partner.

Speaking of, the studio has recently announced an exclusive deal with Entain. As agreed between the two companies, casinos running under the Entain umbrella got the unique opportunity to offer Steinreich (Super Gems) for two weeks following the date the game was officially released (March 31).

As mentioned in the introductory part, Relax became one of the first suppliers to announce its presence in the newly regulated Ontario market on April 4th. Granted license on behalf of the Alcohol and Gaming Commission of Ontario (AGCO), the provider debuted with more than 130 games from multiple talented studios.

…the aggregator tied knots with Meridian Gaming to make its titles available in the Serbian market for the first time. Temple Tumble, Beast Mode, and Money Train 2 were just some of the numerous releases presented to the local audience for the very first time.

What a powerful deal between the two brands. Relax Gaming’s ability to continue pushing forward and reach new markets is admirable. Congrats to them!

I think this is an excellent opportunity for Hölle Games’ Bonus Spin to be presented in the best possible light.