Relax Gaming Back to Gold Digging in Mega Mine Nudging Ways 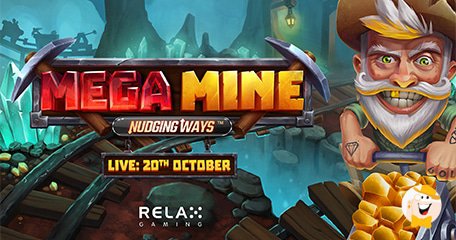 Dig Deep with Relax to Hit 50,000x Wins in a New Mining Adventure

Entering the Dutch market and releasing Helios’ Fury earlier in October has marked an important milestone in Q4 for Relax Gaming, an award-winning iGaming aggregator game producer founded in 2010 on Malta.

The studio is giving players a chance to expand their winning potential up to 50,000x this month by launching a new gold-digging slot, called Mega Mine Nudging Ways.

A Mining Adventure with 32,768 Paylines

Following the company’s recent rollouts, Helios’ Fury and Volatile Vikings, this next jaw dropping game is set to astound each customer thanks to the exceptionally well-crafted Nudging Mystery Stacks feature.

As a result, the Mystery Stacks will nudge into screen until the miner appears in full view, presenting a value between two and five.

This number represents how many symbols a stack will reveal. According to Relax Gaming, the game’s highlight can immensely bolster a player’s win potential, mostly thanks to its ability to appear on every reel.

Reaping the benefits while mining in this exciting new slot from the provider will take place on a 5x4 reel setup, supported by up to 32,768 ways to win. You can expect to see more cutting-edge graphics as you descend deeper into the crust, including explosive wild symbols, diamond-filled crates acting like scatters and a variety of colorful jewels – designed to increase the opportunities of getting your mine cart across the tracks to victory!

Mega Mine Nudging Ways offers players six free spins for landing two or more scatters on the reels. However, they can also activate the Mega Free Spins bonus round and benefit from Nudging Mystery Stacks as they land more frequently during this mode. The feature can also reveal stacks of wild symbols, taking the win potential from massive to mega, claims the studio, which is around 50,000x the bet.

To summarize, each additional scatter symbol results in an extra free spin. Getting the most of this epic slot occurs when the win is worth 60 times the initial bet. In certain jurisdictions, players will be able to purchase the bonus rounds and gain access to the Mega Free Spins without waiting for it happen naturally.

“With this production the key is giving players more ways to win and opportunities to achieve impressive wins in order to add both excitement and potential. In every slot we release, we continue to drive the differentiation in our games that is such a strong part of our ethos. With its large win potential and appealing graphics, we expect this game to start strong and continue to gather momentum with a wide fanbase.”

The leading B2B supplier from Malta has recently entered the market of Netherlands. On a side note, the company continually confirms its important position in the industry by launching groundbreaking products such as Dead Man’s Trail, published earlier in September.

I like gold mining games, this one seems extraordinary. I will definitely try it

What a powerful game from the provider with impressive features…

This is going to be a big boom, this is an awesome slot.

Graphical marvel with astonishing payout potential. One of my new favorite providers.