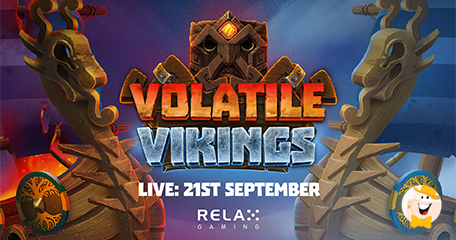 Relax Gaming, a constantly increasing aggregator and developer of particular content is inviting players to join the raid for winnings in the new game, Volatile Vikings.

A feature-rich adventure displays a 6x5 grid, occurring on the high seas where players can enjoy two opposing environments: an icy one in the base game, and the boiling atmosphere in the bonus game. Everything is followed by a spectacular soundtrack and players promised to have fun.

The new slot by Relax Gaming puts the Vikings story in the first plan. They also appear as the main symbols of the game, emerging in different colors across the reels. While you are playing the title, you will see anything from blue, orange, green, yellow, and purple Viking, delivering different prizes depending on the number of symbols on the reels.

The game is also specific for the Multiplier Reveal and Bonus spins features. Every spin begins with two multipliers reveal symbols, one appearing on reel 3 and another on the fourth reel. Every symbol will also have a counter and multiplier included. The multiplier will drop by 1 for every winning cascade in the identical spin. As soon as the counter shows 0, the multiplier will be turned on and destruct all adjacent symbols (the maximum is 8). It will reveal space for new symbols to show up. The end of the spin will see the amount of all gathered multipliers applied to the entire win.

Bonus spins are also an important part of Volatile Vikings. By hitting three bonus elements during the main game, you will activate six bonus spins and every new bonus element will deliver one or more spins. During the same round, the Multiplier Reveal feature will include any revealed multipliers and become a persistent multiplier. Each bonus element emerging in the bonus spins round will also release an extra spin.

“Our dev team has done yet another tremendous job with Volatile Vikings. They’ve taken a traditional theme and injected the kind of gameplay that really sets our titles apart.”

According to his words, players can expect an action-packed experience with a pay-anywhere system that drives the differentiation in their games. It is followed by unique animations and a soundtrack.

“The new slot by Relax Gaming”

It's an interesting game with big payout potential.