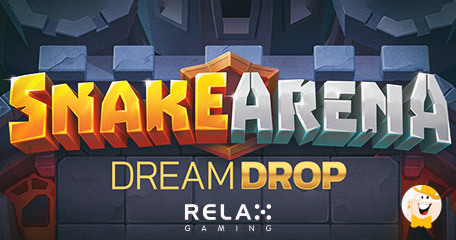 Almost two and a half years after releasing one of its biggest hits to date, Relax Gaming is proudly announcing a follow up to the legendary Snake Arena, an epic battle between knights and a giant serpent!

This time, the story is taking us straight to the battlefield with five different jackpots, where players must go head to head with a slithering enemy in order to hit the maximum pot of 2758.8x their stake.

Since the initial release in 2020, Snake Arena has been recognized as a hit among the fans, easily making progress across every market and vertical. In the studio’s 2022 follow up, players will have an opportunity to land five Dream Drop symbols in the Jackpot Spin and enter the Dream Drop Bonus.

This revamped version of the popular title from Relax Gaming is also packed with a giant wheel featuring five different jackpots. However, the fiery action takes place on a 5x5 grid and 30 fixed paylines.

Players will find themselves in the role of brave knights scattered across a battlefield where they must confront a slithering serpent in order to rock the foundations of this high-volatility gaming escapade and walk away with wins of up to 2758.8x their initital stake.

As you might have guessed, the snake and knights represent wilds and trigger the complimentary spins round. However, both of these symbols must land simultaneously in order to enter the stage.

During mini games, the snake will chase the knight and grow in length at every catch until it runs into its own body, bringing the round to a halt. If you succeed in defeating the snake, you are awarded the maximum win of an additional 1000x the bet!

Snake Arena Dream Drop comes with an RTP of 94% and it is also supported by innovative mechanics that bolster the excitement levels, such as the Wild Chase feature, which occurs randomly and transforms the entire reel into a wild.

“Snake Arena was designed from the ground up to get hearts racing and now with the addition of our innovative Dream Drop Jackpots we have made this game a truly thrilling experience,” explained Simon Hammon, chief product officer at Relax Gaming.

According to Hammon, the company’s new jackpot system is showing astonishing results on the market. The latest title in the series is feature-rich and it brings hours of interactive gameplay, which is a warrant for quality and entertainment – something that Relax Gaming is well known for.

With the recent launch of Temple Tumble 2 Dream Drop, Relax Gaming presented its first title that incorporates the company’s highly anticipated and new Dream Drop Jackpots mechanic, which is activated when landing six Dream Drop symbols on a random spin.

The series represents a unique jackpot offering on the market, featuring five linked progressive global jackpots – Rapid, Midi, Maxi, Major and Mega. The latter is boosted every 2 wins with an increase of EUR 500,000 up to a cap of €10 million.

The new series has added more quality to the games. I enjoy playing these slots and look forward to seeing more player favorite titles with the built-in mechanic.