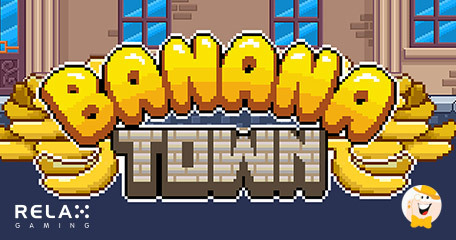 The celebrated iGaming aggregator and supplier of software, Relax Gaming, is back with a new title right at the start of July and it features a troop of monkey mobsters straight from the world of organised crime in Banana Town.

This high volatility slot is capable of triggering maximum wins at 10,000x the bet and it offers several exciting bonus features and mechanics to take advantage of, as well as random multiplier upgrades and complimentary spins.

Heading on Down to Banana Town

After launching Blender Blitz to mark the beginning of Summer, Relax Gaming is back to invite players for an immersive story about the world of organized crime.

Named Banana Town, the studio’s next release is a primate-themed adventure where every symbol comes with a multiplier associated with it. These boosters are automatically applied to all wins and can even double up after each consecutive win.

To make things even more exciting, the feature can also trigger randomly, assigning a random multiplier upgrade to a random number of symbols at the start of a new spin.

Those players that are lucky enough to land three or more dollar scatter symbols anywhere on the reels will receive a total of eight honorary spins. Moreover, each additional bonus symbol that lands thereafter will award an extra spin.

In certain jurisdictions, players will be allowed to buy their way into the bonus but it will cost them 100x their stake. This option automatically triggers the mode, and players are guaranteed big wins at a much quicker pace here, so only make the decision if and when ready.

“Head on down to Banana Town for what we promise will be an unforgettable visit!” commented Simon Hammon, Relax Gaming former CPO.

According to Hammon, the company’s latest retro-style slot with pixelated graphics is a refreshment in every sense, and it looks fantastic. The game boasts incredible features and mechanics and it will be a true hit for players who like big multipliers and impressive wins.

At the beginning of July, Relax Gaming has decided to make changes in senior management and appoint Simon Hammon as its new chief executive officer.

The former chief product officer will replace Tommi Maijala, who had held the position since November 2019. As announced, Tommi will remain with Relax Gaming until the end of 2022, supporting Simon in his transition.

The long-standing CPO is bringing years of experience not only within the company but from other brands where he had served 10 years within executive management teams.

Simon is honored to take on the position of Chief Executive Officer at Relax Gaming and promises a continued growth for the upcoming period across all verticals.

“Relax Gaming, is back with a new title”

haha whar a cooked crazy name, Banana town, i reckon this looks cool as hell with the retro design, And i can just imagine the game designers were puffing some good stuff when they came up with this wacky name and theme!

I find the video slots game with a retro design to be really fun. This is another successful effort by Relax Gaming.

Look forward to testing it out. I enjoy playing retro style slots from time to time.

Pixelated slots are a bit underestimated, they’re in fact quite fun and bring back that retro style we all enjoy from time to time. Great release, keep up the great work.