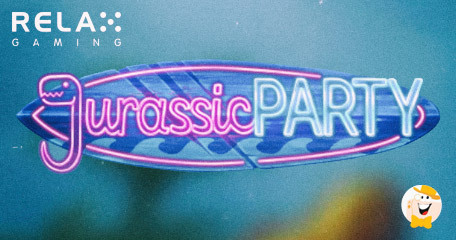 After striking a German-focused Powered by arrangement with Hölle Games earlier in April, the leading iGaming aggregator and supplier of unique content, Relax Gaming, is returning to its usual activities and sends players back to the Jurassic era for the wildest party of the last 65 million years!

If you’re ready for a real blast from the past, buckle up – Jurassic Party is a roaring prehistorical fun time with dinosaurs on a high volatility 7x7 cluster pays grid!

As soon as you enter the Jurassic era to join the party in Relax Gaming’s latest video slot, you will see a whole array of the provider’s signature bonus modes and mechanics, followed by a complimentary spins and re-spins.

These highlights can summon some serious wins in the range of 20,000x the stake, so…

Focus primarily on the Combo Feature Spins which are triggered whenever three scatters emerge on the grid. As the feature kicks in, players are awarded unique modifiers or feature picks. Among these attractions are converting wilds, expanding symbols, random wilds, extra spins and symbol upgrades.

For every additional scatter that triggers the bonus spins, Relax Gaming threw in an extra feature pick, while further scatter images during the round increase the number of spins and feature picks.

Whenever two scatter symbols are present on the reels at the end of a spin, you will initiate the Combo Feature Re-Spin. Amazingly, it plays out automatically with a minimum of two features randomly combined!

At long last, if you wish to increase your chances of winning big-money prizes during gameplay, there is an option to activate the Mega Bet for 50% of your regular bet amount. As a result, you receive an additional feature when Combo Spins and the Re-Spins begin.

In certain jurisdictions, players will be able to enter the bonus by purchasing the Buy Feature, taking them straight into the action.

“I predict that this quirky dinosaur-themed title is going to be yet another huge hit with players and operators alike,” commented Simon Hammon, Relax Gaming CPO.

The chief product officer also said that the studio has built a strong reputation on the market as a forward-thinking provider with visually stunning slot games. Just like The Great Pigsby or Hex, this title is also packed with memorable characters and cutting-edge features, marking Jurassic Party as another stellar addition to the company’s rapidly expanding and inspiring portfolio.

The iGaming aggregator has recently confirmed its position on the global scene by becoming one of the first suppliers to enter the newly regulated Ontario market on April 4th.

This expansion has been approved with a supplier licence from the Alcohol and Gaming Commission of Ontario (AGCO) and it will allow Relax Gaming to increase its potential in North America.

A collection of 130 games is already available with multiple operators in the territory, while half of the portfolio is powered by 16 talented partner studios.

“Prepare for a blast from the past in Relax Gaming’s prehistoric hit Jurassic Party”, relax-gaming.com, April 19th, 2022.

The game looks really cool, I what they did with features, it’s promising!!!!