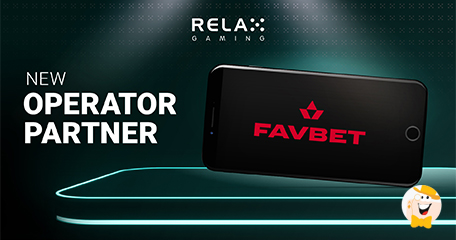 As August slowly approaches its end, Relax Gaming does its best to expand in the Romanian market by signing a B2C agreement with a leading sports betting operator, FavBet.

This operator has been active on the iGaming scene since 1999, and has even managed to expand across major European markets. Apart from its sportsbook offering, the platform also hosts various casino options, live betting, slots, lottery, live dealers and virtual games.

By rolling out with FavBet, Relax Gaming will provide the much-anticipated content from its hand-picked Silver Bullet and Powered by Relax partners. As a result, players on the platform will get their hands on titles from some of the industry-leading studios like Storm Gaming, ReelPlay and Kalamba, to name a few.

Nevertheless, the company’s latest expansion deal will also allow full access to other top-rated content from its proprietary catalog, such as Money Cart 2 Bonus Reels, Top Dawg$ and Templar Tumble.

As you may know, this partnership follows a long line of other relevant Romanian operator deals, confirming the provider’s high-performance in the region. As revealed, Relax content is very well-received by Romanian players and casinos in the country, leaving much room for new expansion deals in the future.

“FavBet’s focus on technology and high-quality content represents the ideal partner for us and our studio partners,” commented on the deal Daniel Eskola, CCO at the game studio.

Eskola also said that the brand is highly regarded in Romania, helping it to additionally bolster its footprint within the territory. The CCO looks forward to starting the next chapter of development by the end of 2021 in this jurisdiction.

Meanwhile, Sergiu Burbulea, CEO of FavBet Romania said that the casino’s vision is to offer the best form of entertainment to its clients, bringing a unique experience in each division.

Burbulea isn’t hiding the fact that the team does its best to deliver high standards at FavBet, and Relax Gaming represents a partner with a similar work ethic, therefore, an obvious choice, concluded the chief executive.

Live in Denmark with Tivoli

At the beginning of August, Relax Gaming even partnered with the leading Danish online casino operator and amusement park company, Tivoli.

Owned by Danske Spil, the brand has operated as an established player across the Danish market since 2012.

Under the agreement, Tivoli will include the supplier’s range of proprietary titles such as Book of 99, award-winning Money Train 2 and other major releases. Content from Silver Bullet and Powered by Relax partners will also be available to Tivoli, including innovative studios such as Kalamba Games, 4theplayer and ReelPlay.

This is great news for players in Romania, Relax is a major player in igaming.