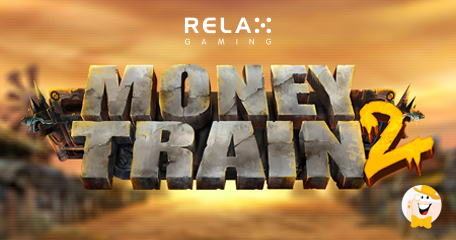 Exactly one year after releasing Money Train, a Western-themed slot with elements of steam punk, Relax Gaming is bringing the long awaited sequel of its famous freight train cart. The catchy spaghetti western is available with operators from September 2nd, 2020 and it will put fans of the series into a perfect mood for some highly volatile action.

As reported by the software company, Money Train 2 has already received glowing reviews from a select group of industry experts after a sneak preview. Devotees can now expect an exhilarating gameplay experience with a maximum payout of 50,000x stake, triggered with the help of four main characters in a post-apocalyptic world.

As players all around the world set to encounter the much-loved Money Train bonus round that made the original a top-earning title to date, it is important to notice that a significant revamp of the game goes far deeper that an impressive visual makeover.

According to the acclaimed software studio, the game-changing feature additions will keep the engagement levels high throughout the playing session and deliver intense action. Among the new attractions are re-spins, activated when two bonus icons emerge anywhere on the playboard.

Designed to lift the excitement during base play, this functionality is specifically made in accordance with feedback on the original. Each bonus symbol reveals multipliers that are ultimately added together, and respins are also awarded until a win is generated. Next, the accumulated multiplier is applied to the total, boosting not only the excitement but winning potential as well. Here’s the official preview:

Another entertaining highlight is also the Money Cart round, introducing a new twist where additional two reels can be unlocked. Simon Hammon, chief product officer at the company said about the latest August drop:

“From day one, Money Train was a strong hit and has continued to attract players to this day. Given this significant level of popularity, we saw huge potential in delivering a sequel that moved the dial even further in terms of engagement.”

Hammon also added that the team have listened intently to feedback from both players and operators.

“Money Train 2 delivers on every aspect, from the unique theme and experience-enhancing animations to the mechanics that make it a standout contender. It’s what a great sequel should be,” concluded the CPO.

The company’s main focus for its latest hit product was to create an improved version of the first title, since many sequels on the market end up taking away everything from the original. Ana Bracic, senior 2D artist at the studio said that the post-apocalyptic theme gave the team creative liberty when it comes to inventing unusual assets and concepts.

“It is the perfect world for making something new out of the old,” added Bracic.

Relax Gaming has achieved global recognition after launching Money Train, which is still considered to be one of the company’s best performing titles of all time. As stated, it outperformed the majority of group’s slot machines and it still continues to deliver top results on the market.

Thanks to the newly implemented mechanics, the next installment will appeal to players even more, including operators and live streamers. The company has always believed in listening to community feedback and based the development of its next groundbreaking slot on recurring comments.

Money Train 2 is finally ready to come steaming onto the tracks promising an engaging, daring and exciting venture.

“Relax Gaming to roll out biggest release of the year with Money Train 2”, relax-gaming.com, August 19th, 2020.

Omg it’s so fun. If you think it’s not going well just hold out for the bonus. It’s all about the bonus lol

havent played the original , off to ck it out first

I honestly can’t wait for this. People hate on money train, but they aren’t patient players I think lol. Once I played with $10 balance on money train and was on my last .20, and then won almost $200.

Here is a sequel to the cult game that makes me very happy, I look forward to its release!

This is certainly one of their biggest hits, so glad they finally revamped it! It look better now with all these new features and maximum payout is worth giving it a try for sure. Great game for the Summer!