Relax Gaming Set to Unearth Treasures up to 20,000x in Cluster Tumble 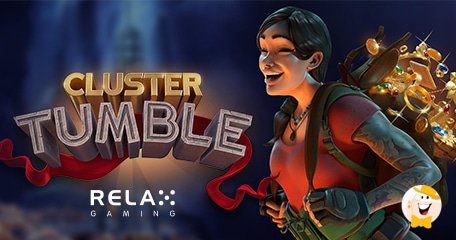 If you just recently uncovered a new gold-digging slot from Relax Gaming, Mega Mine Nudging Ways, released on 20 October, bring a pickaxe and get ready to excavate even further to unearth hidden treasures up to 20,000x your bet in Cluster Tumble – the studio’s latest action-adventure game.

Available since 3 November, the fifth follow-up in the Tumble Series features a courageous explorer who is on a mission to climb the Temple’s summit and rescue her missing partner.

Lightning Wins of the Tumble Franchise

After achieving huge success with the Tumble franchise on a global level, Relax Gaming has finally revealed the fifth action-packed installment, destined to outperform the original, Temple Tumble, published in February 2019.

The story continues studio’s explosive journey into the depth of the Cambodian jungle, taking the heroine deep in the Himalayan wilderness in the outskirts of Nepal. This time, players will have to navigate a larger 8x8 grid and clear all tiles that stand in their way in order to win.

Due to a variable number of symbols in play, wins are formed only when destroying all the surrounding blocks. Nonetheless, landing three scatters will grant access to the Temple, filled with more goodies and treats.

On their fifth quest, players will also be assisted with wilds and power-up blocks, containing magical features. When active, these blocks bring in extra wilds, Lightning WinsandFire Transform modes that convert into targeted symbols in this highly volatile expedition.

To enter the biggest attraction and roll some free spins, players will have to hit three scatter symbols by removing all stone blocks from the board during base play, which is very similar to another captivating title from the series – Templar Tumble. Triggering extra rounds begins with five spins, while clearing the whole board during this stage awards three additional spins and increases the multiplier by three as well.

“The Tumble series has time and again proven itself as we continue to drive differentiation,” commented Simon Hammon, chief product officer at Relax Gaming.

The CPO is proud of the fact that Cluster Tumble can offer so much variety, despite being the fifth game in the popular series. Hammon is also confident about the popularity of the game’s standout heroine, whose brave character and sense for exploration is likely to win the hearts of players around the world and possibly outclass other similar series.

A Year of Awards

Due to its continuous commitment to fulfill the highest expectations of players and operators across several divisions in the iGaming industry, Relax Gaming is now regarded as one of the leading aggregators in many territories.

The studio is powered by teams in six locations around Europe, whose mutual contribution to the market provides various partners with one of the most comprehensive selections of games.

In the midst of October, this aggregator signed a historic agreement with NGA to bring its 24 studio partners to the Dutch market, where a state-owned company, Holland Casino, has legal monopoly on gambling in the Netherlands.

Players around the country are now given access to an encompassing selection of titles, ranging from high performing proprietary slots to an expansive library of third-party content.

On a final note, at this year’s International Gaming Awards (IGA), held in UK last September, the industry’s leading supplier secured the award for Unique Gaming Company of the Year.

Earlier in July, the software prodigy earned four EGR B2B Awards and two more at the SBC Summit in Malta.

These guys know how to make a good franchise and keep it fun with every new sequel. Love the artwork, but I think it’s the features that make you wanna carry on with every next spin. Great job, anyway!!