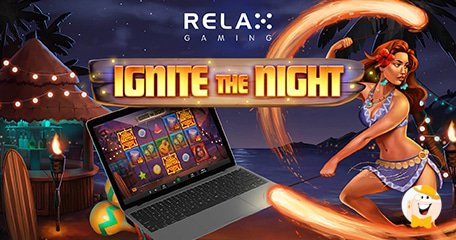 Provider of next-generation gaming content, Relax Gaming, has announced the imminent release of their new slot game titled, Ignite the Night, which is an immersive tribute to Caribbean summer nights' glow.

The company that also specializes in platform distribution created this loving homage to “summers that never end” in the form of a 5x3 game that is set in a tropical island, filled with “alluring and tantalizing” symbols, as the official press release states – with an added extra charm represented by the gentle strumming of an acoustic guitar, serving as the game's soundtrack – until the bonus spins mode when it shifts to more upbeat, electronic music.

More Than Just a Summer Fling

It's not all just about the stunning graphics, though...

...as Ignite the Night also assures there's a steady dose of heated moments provided by Fire Multipliers: during every spin in main gameplay, a random symbol of higher value will have a 5x multiplier, that can actually increase the bet 50 fold on a winning spin.

“In building our in house games we’ve been determined to show a diversity of themes backed by unique mechanics. Ignite the Night is an enticing addition to our portfolio, offering the perfect cocktail of relaxation and excitement set against a delightful Caribbean backdrop. The feature rounds exhibit all of our usual flair for engaging, colourful gameplay, as we continue to show diversity within the Relax proprietary portfolio.”

The latest title is the 9th slot launched by Relax since October of last year...

...and it comes in time shortly after the announcement of two future releases: It’s Time to Get Ready to Rumble, that will have its world premiere later during the year and will feature an appearance by famous sports announcers, Michael and Bruce Buffer.

With over 570 games under their belt, the supplier has grown significantly in the last year and expanded its commercial footprint with over 50 agreements signed in a matter of months, some of which were struck with some of the most esteemed names in the industry.

In March, Relax inked a deal with famous operator, Kindred, with whom they went on a mission to France, where the two will engage in poker activities. Namely, Relax has delivered their online poker products to Kindred's network of French sites.

...in April, a partnership was agreed with Green Jade, according to which their entire portfolio of games will be supplied with Relax's library. Commenting on the agreement, Daniel Eskola, CEO of Relax, said:

“We are delighted to have signed this partnership with Green Jade Games, an innovative provider backed by highly experienced industry professionals. Relax Gaming is committed to pursuing an open and collaborative approach to doing business, and this platform-to-platform agreement stands to benefit both companies long term.”

Finally, in late May, the entire collection of slots and table games from the supplier was sent to Interwetten's network of online operators and casino sites whose players will get to experience them for the first time.

Check out the preview of Ignite the Night below!

The game theme is good, but how the theme was used in the game is a bit awkward. 5 multiplier is good and the folding feature up to 50 in the free spin is also interesting. But, overall graphic effect make players bored easily, as I think. And what is this video clip for? Normally, this kind of new game clips show some...

The game theme is good, but how the theme was used in the game is a bit awkward. 5 multiplier is good and the folding feature up to 50 in the free spin is also interesting. But, overall graphic effect make players bored easily, as I think. And what is this video clip for? Normally, this kind of new game clips show some big wins from features, etc, but, the video above doesn't really show any wins, ahahaha :) Maybe the game software is too small or young to take care of the promotions in details, yet.

judging by the trailer it looks really interesting, especially those 50x multipliers during free spins round