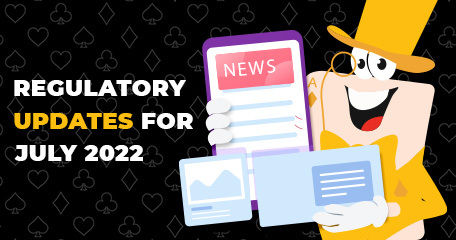 Raising the Awareness of the Importance of Responsible Gambling

While the United States land-based and online gambling market used to be lauded as one of the most active in the world, both June and July have been rather tranquil in terms of new regulations and updates. Only two states have made a significant progress in accepting some forms of betting.

Meanwhile, Europe and Australia keep enhancing player protection measures. Some new guidelines and instructions for advertising were presented, aiming to ensure consumers won’t be enticed to gamble more than they can afford.

To start with, a group of 28 representatives appealed to the Department of Justice to identify and shut down unlicensed foreign gambling operators targeting the US market.

Maryland seems to be closer to welcoming sports betting…

…as the draft regulations to govern this activity were granted initial approval. They have now progressed to a legislative review commission for consideration ahead of a public review period. Wanting to ensure online betting begins in time for the start of the NFL season, Governor Larry Hogan had called for the process to be accelerated. As a small reminder, 2022 season begins on September 8, 2022.

California is also making progress with accepting online sports betting, as the initiative presented by the commercial operators was accepted onto the November ballot. However, the Democratic Party of California advocated for voters to reject the proposal to greenlight online sports betting in the state, but it did not make a recommendation either way regarding the tribal, retail-only proposal.

As for New York, Bally Bet launched its online sportsbook in the state on July 7, 2022.

…North Carolina will still remain without commercial retail and online sports wagering, as the House rejected the bill which aims to legalize these activities.

Finally, the Court of Appeals in Florida announced it would begin the case against the tribal operation of online sports betting in August. Therefore, a final decision on the case is unlikely to be made during the current year.

According to the law, there would be a 12% tax on the net win on both verticals, with MINCETUR being the body in charge of regulating the sectors. Moreover, the Ministry of Transport and Communications would be responsible for the blocking of unlicensed casino and online sports betting operators. The bill progressed to the Executive branch for approval.

…the Chamber of Deputies approved changes to Bill 1153/2019 by 398 votes to 13. According to the amendments, sports wagering sites are obliged to have an office in Brazil in order to sponsor sports teams. For fixed-odds sports betting, 1% of the operators’ gross profit will be directed to sports organizations.

Finally, in Chile, Deputy Marco Antonio Sulantay presented legislation to ban the advertising of online sports betting via sponsorship deals with local football clubs and leagues. The bill was submitted to the Commission of Sports and Recreation for consideration.

To start with Romania, where the Ministry of Finance proposed an increase in the rates of withholding tax levied on gambling winnings. If passed, the following rates would be applied:

In Belgium, the Government approved legislation to impose a €200 per week deposit limit on online gambling. The new limit will take effect starting October 20, 2022. Players can request for the limit to be removed provided they meet credit requirements. They can also request a lower limit.

As for Slovakia, the Office for the Regulation of Gambling announced it was drafting new advertising standards to limit the scope of gambling advertisements across all platforms. In addition to this, the body published a whitelist of licensed gambling operators to help citizens identify legal gambling sites.

Meanwhile, in Australia, the New South Wales Government proposed new regulations to ban sign-up bonuses and special odds. On top of that, the regulations stated that advertisements must not entice people to gamble. From July 1, 2022, bookmakers have higher taxes- they are increased from 10% to 15% of the gross win.

Queensland followed the example and inclined its taxes from 15% of the gross win to 20%. Also, the ACMA announced it would establish a self-exclusion register to cover all online and telephone betting services. These plans were included in its 2022/23 compliance rules.

“rather tranquil in terms of new regulations and updates”

Great report. .But you wrote " Meanwhile, Europe and Australia keep enhancing player protection measures." Since last year I can only deposit 1000 Euro a month for online gambling and the maximum for 1 spin is 1 Euro. The thing is I can still take all the money I have walk into the next landbased Casino and put any amount...

Great report. .But you wrote " Meanwhile, Europe and Australia keep enhancing player protection measures." Since last year I can only deposit 1000 Euro a month for online gambling and the maximum for 1 spin is 1 Euro. The thing is I can still take all the money I have walk into the next landbased Casino and put any amount I like on a spin. How is this supposedl help anyone? They needed 10 years to come up with those laws. They still tolerated Casinos with a Malta license to operate in Germany but they are now officially illegal but instead of just kicking the site out , the authorities blocking the players IP address from the casino. This is not ' enhancig players protection ' it's harassment.

An excellent report for player, with useful information on global regulation and advancements. Thanks!

Thanks for the report and for letting us know the current state of affairs with gambling regulations around the world.

Here we can always find a lot of useful information about regulations in all corners of the world. Markets are getting regulated and that is the most important thing for players. Only regulated markets offer them maximum protection.

Love these overviews! Everyone in this field needs to read this and be aware of the global happenings within the industry..

It’s glad to know that, globally speaking, the industry is realizing how important is to have player protection measures in place. Thanks for the comprehensive report!