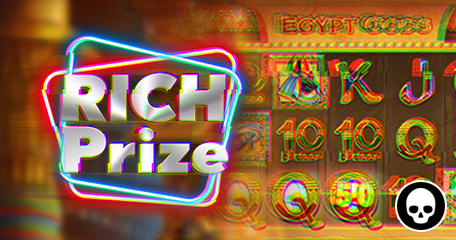 Catching bad guys red-handed always feels bitter-sweet: bitter, because it irrevocably proves that bad guys exist. Still. And will continue to exist, in all likelihood. Sweet - because we brought them to justice and saved somebody’s bacon, for want of a better word.

Today’s grim story is courtesy of Rich Prize Casino - a place that held tons of pirate games in their ranks, and then foolishly thought they’d get away with it by denying.

Fruitful Investigation Based on Trusted Hints

Only, it wasn’t much of denying. Not good enough for us, anyway.

Our suspicions were raised when we noticed there was something off about majority of their slot games - and the tells were many.

Being well-versed in dealing with all sorts of iGaming dark magic, our team of in-house detectives got straight down to the job and found that:

We went off and relayed our conclusive findings to the people behind the troublesome casino.

We wanted to see what their defense would be in the light of the circumstances.

Their response, suffice to say, was not satisfactory.

Our remark regarding the game’s illicit hosting was met with the “explanation” that the casino was a “site aggregator which uses WagerGun platform which allows the providers to share their games with them.”

In regards to restricted countries not being restricted in their casino, they replied by saying that their provider “should be responsible for restricting any countries” and added, rather condescendingly, that “they will look into it.”

The similar answer of “we’ll check” came in regards there cancelled Aristocrat games. The cherry on the top was the “If you have any more reasons to doubt i'm afraid I don't have time for explanations or arguing” - a classic example of evading the subject.

At the conclusion of all this, we have contacted NetEnt - they have indeed confirmed that the games were fake and have sent a Cease and Desist letter to Rich Prize Casino.

The games have since been removed from the casino, same as fake Novomatic games. We’re still waiting for the removal of counterfeit Amatic and Aristocrat games.

There you have it, folks, the full SP. No need to accentuate the shadiness of this casino and advise you against going there. Plenty of honest online casinos out there, so pick one from our trusted online directory.

As for Rich Prize, well…here’s hoping they see the light following this ordeal and remedy what they broke.

Thanks for this important information. I played Rich Prize Casino thinking everything was fair and just as it should be. Playing at dozens of casinos is hard to verify, good that there is a site like LCB. Now I will be avoiding this casino.

Thanks for the warning! LCB'ers, please read the article carefully and stay away from this casino!

Another one joins the "bad guys" list. Make sure to read this report and remember the name of this casino LCB'ers, so you don't end up playing at Rich Prize Casino!

And they really thought the fake games would go unnoticed. Bad bad guys! Thanks for sharing!

Glad these guys have been caught. They couldn't get any further with this. Great report LCB, thanks for the heads up.

I really think that the LCB team is doing a really great and important job for the entire community... thank you for taking care of the players!

Once again a great job for the LCB team, taking care of its members all the time!

Good job, LCB well done yet again for catching this!