Salsa Technology Revs up Offering After Teaming up with Nolimit City 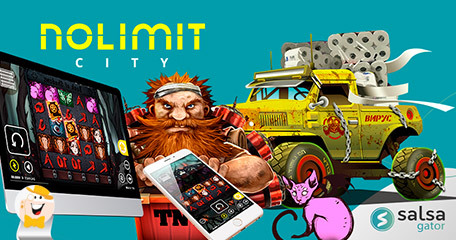 After rolling out with Zillion Games and receiving a B2B license from MGA, Salsa Technology is back to rev up its outstanding Salsa Gator offering and announce a full launch of Nolimit City’s games on the platform.

Recognized for its groundbreaking concepts and acclaimed themes all around the world, this iGaming developer is looking forward to showcasing its library of more than 50 games to a new audience in Latin America.

The gaming suite is packed with a range of features and cutting-edge proprietary mechanics too, including xNudge, xWays, xSplit, xPays, xBomb, and Infectious xWays.

Soon after expanding its footprint on the market with three major brands from the software development vertical (Zillion Games, Skywind Group and Amusnet Interactive) Salsa Technology is ready to showcase a new competitive portfolio of slots within the Latin American region.

In the upcoming days, the leading iGaming solutions provider for LatAm and Europe will include some of Nolimit City’s most in-demand titles like San Quentin xWays, Fire in the Hole xBomb, xWays Hoarder xSplit, and Book of Shadows.

On that list are also the recently launched Folsom Prison, True Grit Redemption and Tombstone R.I.P. as Salsa Gator hand-picks only the finest titles from the best providers across the entire gambling industry.

In addition, each game will be accessible through a single integration while contributing to both the supplier’s and operator’s long-term growth strategy.

“Nolimit City knows exactly what they are doing when it comes to designing games that players have a real affinity with. There is no doubt that these games will be an instant hit with our network,” commented head of marketing and communications at Salsa Technology, Eliane Nunes.

As industry trends evolve at a more rapid pace in 2022, Evolution AB continues to surprise the iGaming community by entering into a new agreement to acquire the entire issued share capital of Nolimit City Holding Ltd.

The upfront consideration of EUR 200 million will be followed by earn-outs of up to EUR 140 million, while the entire consideration could amount above EUR 340 million at some point.

If it acquires one of the world’s number one providers of online casino games, Evolution will extend its portfolio of top-notch slot brands on its network, such as NetEnt, Red Tiger, and Big Time Gaming.

According to Jonas Tegman, co-founder of Nolimit City, the studio’s revenue is expected to amount to EUR 30 million with an EBITDA of EUR 23 million for the calendar year 2022.

Evolution is licensed and regulated in many jurisdictions, such as the United Kingdom, Belgium, Canada, Romania, South Africa, and others.

“a new competitive portfolio of slots”

Players in Latam will experience something truly different and unique on the gaming market, this is very good for the local operators!