Set Sail with Greentube's Captain Venture Treasures of the Sea 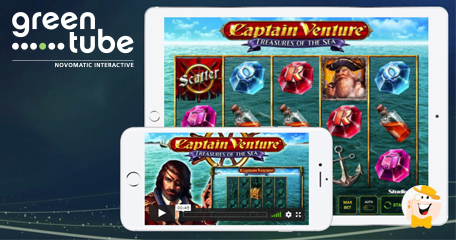 Get ready for a strong ocean breeze as Greentube sails away in a sequel to a true slot classic – Captain Venture: Treasures of the Sea. One month after announcing its latest blockbuster action title, From Dusk till Dawn, the supplier has finally dropped anchor to deliver a fresh release to its B2B partners and players around the world!

As expected, the follow-up is taking devoted fans on another swashbuckling adventure, featuring an epic story on an updated 5x3 grid with 10 winning lines. If you loved the original slot game, buckle up for a host of extraordinary highlights, more gunpowder explosions and of course, a range of treasures waiting for every passionate buccaneer with affection for chest bounties.

Announced on 19 October 2020, Captain Venture: Treasures of the Sea went through an exclusivity period before it started to awaken the real adventurer in sea-farers all over the world. This pirate-themed delight comes with a moderate volatility level and an RTP of 95.7% including a mid-sized betting range between $0.1 to $50 per spin.

Starting with Wilds that substitute for all other symbols in base play except the Scatter, Anchor and Chest, the game’s biggest highlights are actually quite different from those in the original, released in June 2012.

Then, there is Sea Change where the reels plunge into the ocean and rise again with different symbols after a spin. If the Anchor symbol is followed by a re-spin on some reels, players will initiate the Anchor Drop Re-Spins while Treasure Chest Bounty is capable of adding more gems to the reels for even greater wins!

Treasures of the Sea may also display a treasure map during a spin, where Captain Venture symbols activate a feature that awards re-spins. The symbols move around the reels and highlight positions, which are ultimately added to the total multiplier. To clarify:

Finally, to enter the Mystery Multiplier Spins mode, one must land at least 3 scatter bonus icons on the reels, where after each round, the wheel applies a multiplier and adds up all prizes. If new Captain Venture symbols appear, they can increase the win multiplier.

Before reaching a milestone agreement with the Norwegian monopoly operator Norsk Tipping, Greentube made two strategic content distribution deals to increase presence in LatAm and the rest of Europe. By entering into a partnership with Tecnalis and Relax Gaming, the software developer launched its entire portfolio in Latin America and the Estonian platform Fenixbet. The rollout includes video slots, table games as well as video bingo.

Back in December 2020, Norsk Tipping AS has also strengthened its online casino offering through an exclusive arrangement with Greentube, the NOVOMATIC Interactive division.

Genera Networks and its sub-contractor Greentube now provide a host of casino titles and other online games to the state operator, while the official cooperation started early in 2021. The contract is valid for up to eight years and has an estimated value of EUR 25 Million.

“a true slot classic – Captain Venture: Treasures of the Sea”

The design looks much better than the previous one, and the features sound quite interesting.

I'm really not a big fan of sequels, but this one seems nice.

Oh wow, another impressive title in the supplier’s lobby! I liked the original very much, hope the new thing won’t disappoint!