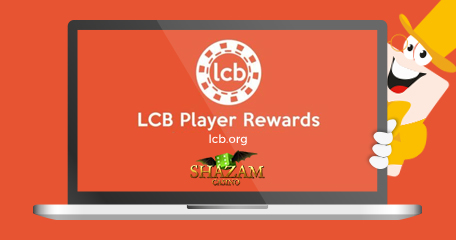 Near the end of September, the LCB Member Rewards program celebrated an important milestone- a total of 170 partners participating in the scheme. A bit more than a month later, we are happy to introduce you to one more online casino joining the ranks- Shazam Casino. Players who make a deposit via our link get an exclusive opportunity to collect a $3 chip and redeem it in the Shop.

Licensed by Curacao, this Bitcoin-friendly facility is focused on the gigantic markets of the United States and Canada but accepts players from other corners of the globe as well. It operates under Superior Share, the same affiliate group which runs Lucky Tiger and Rich Palms casino. Both parlors are part of the program as well.

It’s Time for Some Magic!

Before we share a step-by-step guide on claiming the complimentary credits, allow us to tell you more about the newly-joined brand- Shazam Casino.

Judging by the name itself…

…one could assume that it was either inspired by a fictional superhero, or by an app used to identify the music. Surprisingly or not, it’s none of these two. Making the very first step into this magic-inspired universe, punters are presented with a wealth of games from one of the leading software suppliers.

On top of an excellent selection of bonuses…

…crowded with complimentary spins and bonus cash, the venue hosts a unique Loyalty program dubbed the “Secret Community.” There are five stages to advance through, each equipped with a special set of incentives. Some of the benefits include b-day bonuses, daily, weekly or monthly rebates, a better conversion rate for comp points, increased bet limits, and more.

How to Collect Valuable $3 Chip?

First of all, become a member of the LCB platform. All it takes is to complete a simple form and the process is finalized in less than a minute.

After you do so, these are the steps to follows:

In addition to this, do know that deposit eligibility includes straight deposits, LCB exclusive deposit-based deals as well as sign-up bonuses. Once you collect the chips, head to the LCB shop and redeem them for some interesting goodies.

Kindly note that multiple accounts are strictly prohibited. Punters who are found in breach of this rule will be disqualified and restricted from the LCB platform.

Have you already claimed a $3 chip in some of the participating casinos? Tell us more about your precious experience in the comments section below and as always-play responsibly!

@ goober - could you please send me your casino username to private message inbox and we'll get in touch with the Casino Representative.

I need a Shazam rep to get with me right now. Don't wanna lose thousands.

@Alexis Gold not a problem. Good vibes only!

@ Jexclusive @ Robert Melgoza Thanks for sharing your valuable experiences with us! :)

I’m liking Shazam so far! Within two days they sent me two free chips via email already. I’m already familiar with a lot of their games too so it’s nice. Lucky Catch is my jam! As well as Legend of Helios. I think I’m going to like this one a lot. Can’t wait to continue playing at it.

I like the lcb rewards program. I gained alot of bonuses, lots to do, get rewarded to use and earn. News, and contest I played sign up bonus it was fun at Shazam, got helped, played one of my favorite games. Adding Shazam to the reward list was a good idea now, there's another bonus to use first time users get 3chip...

I like the lcb rewards program. I gained alot of bonuses, lots to do, get rewarded to use and earn. News, and contest I played sign up bonus it was fun at Shazam, got helped, played one of my favorite games. Adding Shazam to the reward list was a good idea now, there's another bonus to use first time users get 3chip back for lcb rewards. I like being a member.

Thanks, one more reason to try out Shazam Casino!

That's great news. Our LCB Member Rewards program is getting bigger and bigger from day to day. Enjoy LCBers. :)

So happy to see Shazam joining our Member Rewards program! :) If you haven't checked out this new brand already, you can do so by claiming Shazam Casino Exclusive No Deposit bonus (bonus code LCB50). Good luck and enjoy LCB'ers!