SkillOnNet Expands Offering thanks to Deal with Playson! 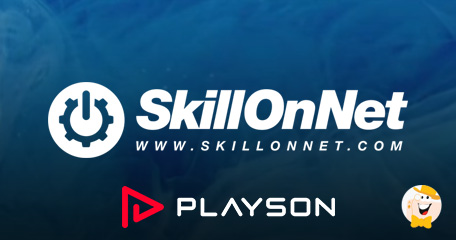 SkillOnNet, one of the leading and acclaimed platforms in the industry, is proud to announce that it has further enriched its offering with titles from a popular casino software developer thanks to the latest collaboration!

The brand has drastically expanded its list of partners in 2022 thanks to numerous partnerships, including the recently concluded one with Spade Gaming!

However, they have more exciting news for us…

SkillOnNet has announced that it has signed another major distribution deal with well-known casino software supplier known for its engaging content, Playson!

The deal between these two giants will, as announced, will see the launch of Playson's acclaimed title library on the new partner's platform!

This means that SkillOnNet's clients will now be able to take advantage of plenty of industry-leading online casino releases that are proven to be one of the most popular among players across the globe!

The distribution will include the developer's hits such as Treasures of Fire: Scatter Pays, Pirate Sharky, and Royal Coins: Hold and Win as well as many more!

"Playson is the fast-growing digital entertainment supplier, operating within more than 20 regulated markets and with more than 140 partners across the globe with many staff based across Europe including Malta and the UK."

This deal marked a major milestone for both brands. SkillOnNet will drastically expand its offering, while Playson will reach even more players!

Playson's staff is based in Malta, the UK, Ukraine, Slovakia, Romania, Hungary, Taiwan, and Greece, and the company holds licenses issued by the UKGC, ONJN, and HGC...

SkillOnNet has a wide offering that features more than 3500 online casino releases. The company operates under 2 casino brands including PlayOjo and LuckyNiki.

Blanka Homor, Sales Director at Playson said:“SkillOnNet is a major tier one operator and software provider and so this deal is another major milestone in our amazing growth story. Through this deal, and others like it, Playson is strongly positioned to meet its ambitions of delivering entertainment and satisfaction to the lives of the busy world."

Jani Kontturi, Head of Games at SkillOnNet said: "We're thrilled to partner up with a dynamic and exciting company like Playson and we're delighted to bolster our platform with a truly fantastic collection of games. It's a really diverse portfolio of exciting titles, developed with engaging math and wrapped in beautiful aesthetics."

“The distribution will include the developer's hits”

It's awesome that SkillOnNet's users will soon be able to play top Playson titles! :)

Good luck to them both ! I'm sure this will be a long term cooperation :)

Great partnership! I believe both parties will flourish greatly! Wishing the best of luck to Playson and SkillOnNet moving forward.