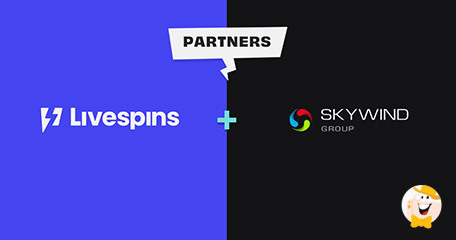 Determined to deliver a socially charged online casino experience, Livespins has entered another significant strategic deal. Skywind Group is the newest studio to team up with the #1 streaming platform and have its content presented by some of the best streamers.

Livespins’ CCO Michael Pedersen is positive that Skywind’s top-class games will keep punters on the edge of their seats. As he noted, this studio gathers the finest experts who know how to get pulses racing, which is why he has no doubt that the newest addition will be well received among the audience.

Fast-Paced Action on the Reels

Thanks to this partnership, some of Skywind’s most popular slots will be made available to Livespins streamers for the first time. The collection includes player-favorite titles such as Big Top Bonanza Megaways, Shaolin Showdown, and Teller of Tales.

Hilary Stewart-Jones, CEO at Skywind, commented on the deal as follows:

“The meteoric rise of online casino streaming has been phenomenal and increasingly a mainstay of our business. Livespins is at the heart of this in driving the streamer community forward with a unique platform and player experience. We are very excited to become a part of that.”

Worth noting is that the developer’s full suite of content will be streamed from Casino Friday. As a small reminder, the agreement with the multi-licensed operator was the very first deal Livespins announced. The deal was penned in November 2021, shortly after the company was presented at the iGamingNext: Valletta conference.

In January 2022, Livespins announced an agreement with Fantasma Games, as the very first studio to have its amazing games presented by the best streamers. Flower Fortune Megaways, Heroes Hunt, and Heroes Hunt 2 were just some of the titles which went live under the deal.

…the streaming platform expanded its network with the iSoftBet partnership. Gold Digger, Majestic Megaways, and Crabbin’ Crazy Hold&Win were just some of the many releases presented to the audience. Furthermore, the company joined forces with SoftSwiss, making its products live for those who utilize white-label crypto solutions.

April 2022 was marked with the Yggdrasil Gaming deal, which brought punters a chance to feast their eyes on top-performing adventures from the developer’s collection. Rise of the Valkyrie, Achilles, Vikings Go to Valhalla, and Bananaz 10K Wayz were just some of the many amazing hits unveiled to the followers.

As far as the members of this forward-thinking gang of enthusiasts note, they are on a mission to socially charge the online casino space. Its well-equipped and innovative platform is designed to deliver an entirely new category of play.

By betting behind the streamer…

…consumers have the opportunity to join the action and enjoy the tailored experience with other participants. This creates a group bet and a shared experience on the same spin but each consumer can adjust their own bet amount and number of spins.

On top of that, the chat feature enables immediate interaction with the streamer. There’s an option to add reactions as well and contribute to building a fun-filled atmosphere.

“finest experts who know how to get pulses racing”

Since LiveSpins' complete range of content will be streamed from Casino Friday, the deal will be an advantage for this operator and its players.

I predict great things from this deal, considering their individual success.

Great collaboration! Online Streamers are a joy to watch, LCB should commit to something similar like this, have some wild and enjoyable person gambling and entertaining us the watchers who are passionate about gambling.. :))

Live streaming slot sessions can be very exciting, if a streamer is charismatic and dedicated, without overreacting, of course.