Skywind Group Teams up with Casumo to Launch in Sweden, Germany and UK 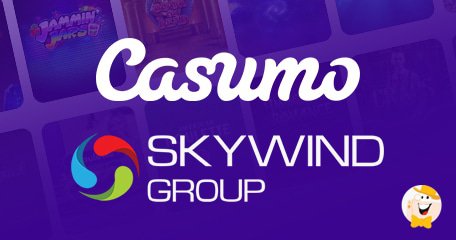 After partnering with a multi award-winning operator Gaming1 at the beginning of July, Skywind Group is very excited to announce another milestone collaboration with “your favourite online casino” Casumo. As the report reads, the brand will soon introduce Skywind’s content to players in three established markets - Sweden, Germany and UK.

Both famous and influential brand in the world of iGaming for nearly a decade, Casumo is a hugely popular destination for all types of clients. They are labeled as pioneers in gamification and one of the first online gaming stations to offer tournaments with “Reel Races”.

Among other benefits for joining Casumo is its enormous list of games available direcly on site, as well as the platform’s bright colorful product design, recognized by many operators and later even “mimicked” due to its capacity to arouse mass appeal and attract loyal players.

The soon-to-be-launched Skywind titles represent the provider’s latest summer hits, including Sticky Sevens Megaways, El Paso Gold and Sea of Pearls. Each one of these releases will go live with Casumo in the coming days while the operator might also offer its loyal customers an enhanced Skywind experience, based on player engagement tools, such as jackpots, tournaments and more.

This functionality is supported thanks to direct integration with the platform.

On a similar note, it is well worth mentioning that Skywind Group has always tried to push boundaries like its latest partner Casumo, giving players a unique gaming experience. The most recent partnership is “the melding of great products with a great platform”, as indicated in the report, and both sides hope that it will be a huge success in the future.

In other recent news about Skywind, it is also important to bring up its partnership with GrooveGaming as well as Casino Gran Madrid Online, while the studio’s earlier hit slot Big Buffalo received an upgrade in the format of super popular Megaways, an innovative mechanic developed and franchised by BTG (Big Time Gaming).

By the end of the month, Skywind is planning to launch Sticky Sevens Megaways or the third title to incorporate BTG’s famous Megaways mechanic. The studio’s latest release is bringing high energy action on a dynamic 7x6 grid. As the slot’s theme suggests, 7s play a key role in the game, acting as wilds with multipliers of 2x and 3x that can land on the reels. The game also includes complimentary spins with unique highlights – Random Wilds and Sticky Wilds.

“Skywind Group is very excited to announce another milestone collaboration”

A great deal for Skywind Group, they will be available to a large number of players after expanding into new markets

Skywind is growing rapidly! And this partnership allows Casumo to further enrich and diversify its products.

It's great knowing that Skywind Group has been extending its presence in Sweden, Germany and UK. Skywind Group creates great opportunities for big success! :)

They keep working well and informing us with fresh news. Extending their presence in new markets is a great step for getting more customers who will be delighted with the portfolio of the leading brand. Carry on doing good job :)

One of the best casinos out there in my opinion. They already had an impressive portfolio but new games are always good news. Thanks for sharing!