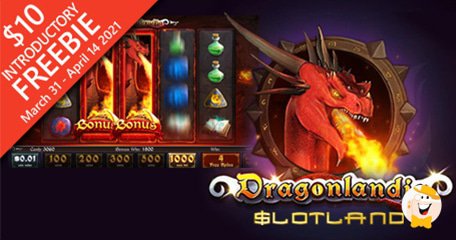 Slotland Casino has just included another brand-new slot game in their library: Dragonlandia. And it comes with a nice set if incentives to all who wish to try it out!

The medieval/fantasy-themed slot has an exciting bonus feature that maximizes payouts, while the Dragon Cave Bonus takes players down into the depths of the dragon’s lair in search of treasures.

Into the Dragon’s Lair

However, the most exciting thing of all is that until April 14th, Scotland is giving all active players $10 to try Dragonlandia out and up to $30 for VIP players!

Some of the game’s features include:

The Ice Wild Bonus symbol that freezes all symbols in a combination for a bonus spin.

All other symbols disappear once the Ice Ogre gets angry. He throws the Rock symbols at the reels to form winning combos.

An additional Wild symbol during extra spins is the Fire Wild Bonus symbol. It can spread onto surrounding symbols as well.

Expanding Dragon symbols will, during extra spins, award up to 3 times the wager. Three Dragons will start the Dragon Cave Bonus. Players enter the Dragon's Cave where a sleeping dragon guards chests filled with treasure. They open the chests to win Coins. If the dragon wakes, it burns them alive, no wins.

All players that have deposited at least once are eligible.

May be claimed twice.