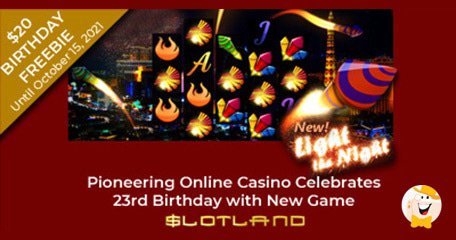 It's time to mark another important event on your calendar this week, as one of the pioneers in iGaming is celebrating 23 long years in business! That’s right, it’s been more than two decades since Slotland joined the market and welcomed the first forerunners of what turned out to be the most prospective industry in the 21st century.

To commemorate this milestone, the operator is giving players a $20 freebie for a festive new game, called Light the Night.

Michael Hillary, who's managed Slotland for most of its 23 years can hardly believe that it’s been over two decades since the launch and the early beginnings of internet.

“Those were the days of dial-up modems when www meant wait, wait wait,” commented Hillary in a humorous way.

The manager reminded us that its team had been creating online casino games since then and remained on the market by constantly adding new ones.

On that note, Slotland's first birthday present for its loyal players is the latest proprietary slot named Light the Night, a spectacular 12-payline offering with sensational fireworks lighting up the Las Vegas Strip.

To refresh your memory before revealing more details about the provider’s latest game, Slotland marked its 22nd anniversary by rolling out Rise of Draco and a $5,000 contest in October last year.

Among the biggest attractions in this celebratory release is “Anywhere Wins”, allowing players to create winning combinations anywhere on the diagonal paylines – left to right or right to left.

Moreover, when a scatter symbol emerges on the reels, a random coin prize will be awarded. The more scatters you collect, the bigger the prize in your balance!

However, getting three or more Pick Me symbols will start a mini game where images on the reels turn into tiles which players uncover to reveal instant coin prizes. The latest slot from the provider, Light the Night, comes with a moderate bet ratio expanding from $.60 - $12 per spin.

If you want to grab the birthday bonus, which contains a $20 freebie, make sure you deposited at least once at this place. There is a special bonus code for claiming this offer, BDAYFREEBIE, so don’t forget to use it during the process. See more in the following video:

In addition, Slotland is giving you a chance to win up to $100 on this offer, which is valid for all slots.

Back in June this year, Slotland’s sister site, Winaday, launched a similar birthday surprise to celebrate its 13th jubilee in the iGaming industry. As a reminder, regulars and newcomers were able to grab chips for 57 slots on the platform and hit a maximum cashout cap of 6x their bet.

Finally, to earn a 144% match bonus on the provider’s latest addition to the portfolio, you must place a deposit between $30- $250. Since Slotland is celebrating, this offer can be claimed twice.

There is a different bonus code for this promo BDAYGAME and it is only available for playing Light the Night.

To conclude, both bonuses are available October 7 - 15, 2021 only, so join the party with Slotland and get your rewards!

Thanks for the b-day wishes, everyone. Come grab your treat! Just FOUR more days to get your free chip ;)

Happy Birthday! The promotions are great. Good luck to all participants :)

Great birthday bonuses, I'm sure the players will enjoy it. Happy Birthday :)

Happy Birthday! Thanks for these amazing bonuses, and good luck to all players! :)