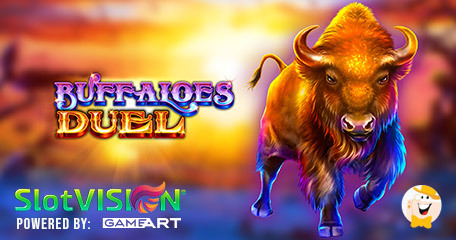 Aspiring Provider Launches a New Title in the Popular Series

After Flaming Fruits, it’s time to get dirty down on the prairie, as GameArt releases its second ‘SlotVision powered by GameArt’ slot, called Buffaloes Duel.

This nature-inspired classic is played across 5x4 mirrored reels and 50 paylines, set in the Wild West and it is based on a high volatility math model, where wins can climb up to 2321x the stake.

Before we reveal more details about Buffaloes Duel from GameArt, it is important to say a word or two about its groundbreaking Mirrored Reels feature. This new attraction lets the two upper rows to always mirror the two lower rows, meaning that you can get two identical sets of symbols on a single spin.

For example, the top symbol of a reel is always the same as the bottom symbol of that reel, increasing your chances of hitting a combo more often.

There are 5 low-paying and 4 high-paying symbols in Buffaloes Duel, ranging from basic card values to rabbits, pumas, deer, and wolves. The latter carries the highest worth, paying 4x the bet for a five-of-a-kind combo.

If the game’s special symbol appears on additional reels, the multipliers will increase, boosting the capacity of wins up to 10x. Finally, when the Golden Eagle appears on the grid as six-of-a-kind or more, it triggers 10, 15 or 25 bonus spins, respectively.

SlotVision’s ‘powered by GameArt’ video slot will be available with every partner casino, while its upcoming title is called 7s and Diamonds, and it is scheduled for launch on 12 July.

Getting Ready for iGB Live

As the industry’s greatest event gets closer, GameArt makes final preparations to exhibit at iGB Live! at the RAI Amsterdam between July 5 and 8.

Apart from seeing the studio’s versatile and rapidly-growing portfolio of online and land-based products, attendants will also have a rare opportunity to try out some of the most popular fruit games like 20 Hot Fruit Delights and 40 Super Heated Sevens.

GameArt is also celebrating the release of its ‘SlotVision powered by GameArt’ series this time. The first two gems in the franchise are Flaming Fruits and Buffaloes Duel, while the soon-to-be-released 7s And Diamonds and Xtreme Summer Hot promise a whole lot of fun for the summer.

“We will be delighted to welcome visitors and our existing partners to our booth, to catch up and show them our latest developments and exciting new game titles as well as our products for land-based operators”, commented Nevena Aleksieva, head of sales at GameArt.

“This nature-inspired classic is played across 5x4 mirrored reels”

I can never get tired of buffalo slots, and this is a good example of how you can still make something out of it and turn into an instant hit. Nice job, GameArt!