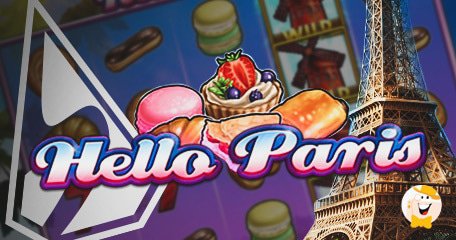 Get Ready to Visit City D’Amour!

Although it still enjoys publicity after announcing its latest game, Pirates of the Mediterranean Remastered, Spearhead Studios is getting ready for a trip to the world’s most romantic place at the heart of Europe – Paris!

The studio has just published an article about its upcoming title, Hello Paris, a journey to the glamorous city with chic cafes, exquisite cuisine and famous landmarks. It features the sounds, sights and tastes on a 5x4 grid with 40 ways to win – all prepared for your delight.

A Trip to Remember

Set against a beautiful summer skyline, Hello Paris embodies the visual and audio identity of the famous cultural capital of Europe. The design team has captured river Seine that flows below the Eiffel Tower and sparked the imagination of players allowing them to smell all the guilty pleasures the city has to offer.

In low-medium volatility, you will be offered a spectacular chance to chase wins across the 5x4 setup, equipped with expanding wilds that fill an entire reel and as a result, dramatically increase your odds of winning.

There are also two types of scatters in play, including a gamble option that allows you to increase your wins up to 80 times the bet value. Visiting Paris has never sounded more inviting than now, especially if it has been a romantic dream for many years.

The game’s theoretical RTP is lingering at promising 95.12% giving you a nice edge with every spin. Ready to pack your bags?

Hello Paris is available on 21 September at all affiliate casinos with content from Spearhead Studios.

As far as it concerns symbols, don’t play this game hungry! Aside from pretzels, croissants and other pastries, you will also see a windmills, 7s and coins raining down whenever a bigger win occurs!

If traveling is not an option for you right now, there are four other upcoming slots to be excited about! Only two days after launching Hello Paris, the studio will be back with Golden Engines to take you for a ride in a Wild Wild West steampunk fantasy.

Offering original gameplay, state-of-the-art visuals and professional soundtrack, this game is destined to become a hit. It is based on high volatility and comes with amaximum win approaching 4000X. In relation to features, there are multiple re-spins, sticky wilds and a multiplier to ensure high engagement and a joyful playing session.

Next in line are Five Ball Fiesta, Keops Wild and Book of Souls Remastered, scheduled for release at the end of the month and all through October.

Get ready for another tribute to the Mexican holiday and an epic fantasy that hides valuable mysteries about ancient civilizations, but also prepare for the mysterious Sphinx in Keops Wild, a 5x4, 40 fixed line game with stacked symbols.

Any time a Sphinx appears on the reels, it expands and transforms every symbol it touches into a wild. Three or more Pyramid symbols trigger extra spins where players are offered 4 scenarios with a varied number of spins and multipliers.

This game is going live on 30 September, so stay tuned!

Oh this looks very lovely, hope it has a strong payout potential!