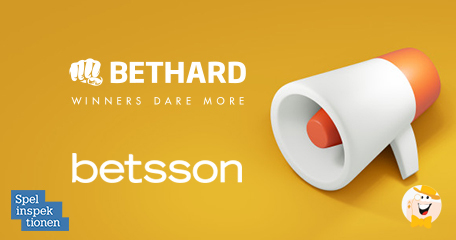 Popular gaming destinations in the regulated Swedish market, Betsson and Bethard, have been penalized by the state’s regulatory agency Spelinspektionen with $2.16 million for failing to comply with bonus offer policies and underage betting.

The Stockholm-listed operator Betsson is accused of two separate violations, including the sale of vouchers for online play via unauthorized retailers as well as promoting branded MasterCards to customers, which is in direct breach of the country’s bonus offer rules.

After a thorough investigation, the regulator has found out that Betsson Nordic Ltd started selling online gambling vouchers in 7-11 stores in March 2019, including Pressbyran, famous Swedish convenience store chain. It turned out that none of the retailers were authorized by Spelinspektionen to do business as the official gaming agent of these brands, which initially was the main reason to launch an inquiry back in November.

In its defense, Betsson claimed that the company’s special vouchers were part of the contract that included gift prepaid cards with a supplier Convenience Card. This partnership excludes further entanglement with other retailers, which according to the operator weren’t acting as ‘gaming agents’ at all in that case.

…the casino brand terminated its relationship with the supplier subsequently and stopped further voucher sales. The company has also stated that its branded credit card was not offered to players as a vessel for faster payouts, implying that it canceled the use of this payment method in certain promotional deals.

The Swedish regulator accepted none of the abovementioned arguments and cited that vouchers could’ve only been used for online play, making retailers indirect salesmen for gambling products. It has also been noticed by the official regulatory agency that Mastercard users were presented with potential freebies after their initial use, which represents another “financial incentive to gamble.”

Even though the operator plans to appeal the warning, sanction and financial penalty, Betsson issued a remark stating that the regulator’s disciplinary measures came as a total surprise. The group does not agree with Spelinspektionen about the issue and claims that no violations have been made.

To conclude this misfortunate series of betting violations in Sweden, it is also important to mention that Bethard, a sportsbook and online casino with a large member database has also been fined with SEK 400,000 for offering customers bets on football matches with players under 18 years of age. The operator was already penalized last June by Spelinspektionen for similar violations.

As a matter of fact, this brand initially received a SEK 2.5 million fine, but the court overturned the penalty in April 2020 in favor of a regulatory warning. Bethard still hasn’t revealed its plans regarding this decision.

“Betsson and Bethard, have been penalized”

Oh boy, that’s a lot of money. I cannot believe they’d be into unauthorized sale of betting vouchers, how lame...