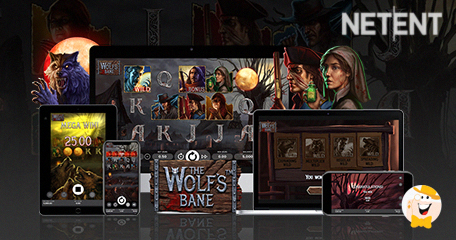 Imagine yourself standing beneath the full moon, all by yourself. You are in the middle of the 18th-century village, and you are so hungry, that you could eat every single terrified inhabitant.

If you have ever wondered what it’s like being a hungry wolf-like creature, NetEnt made it possible for you, as their The Wolf’s Bane is soon to see the light of the day. Or night. As the team says, the dark theme of this release is “designed to appeal to every single type of player under the sun… or the moon”.

Blood-Curdling Howls to Make You Freeze

This horrifying NetEnt release is scheduled for October 24…

…just in time for the scariest event in the world- Halloween. Wanting to give some refreshing new perspective, the studio gave punters the opportunity to play the role of a fanged, clawed menace, which belongs to an ungodly pack of wolfish creatures.

Coming with a deep sense of impending doom (for the poor, terrified villagers), this 5x3 video slot is filled with adequately dynamic features that contribute to the overall sinister atmosphere.

Packed with claws, fangs and ferocious appetite, this title gives you the unique opportunity to howl as loud as you can and collect some nice winnings while chasing the terrified villagers.

Wanting to add more spice to the overall horror…

… symbols of the game bring several villagers – one holding a pistol, another a candle, another a shovel, and another a bottle of medicine as the top-paying icons. Card suits are those lower-paying icons.

Besides being visually appealing…

…this release brings a fine selection of actionable features and symbols. There are four different Wilds icons- Regular Wild, Expanding Wild, X2 Multiplier Wild, Spreading Wild. Each of them is depicted as the different stages of a wolf’s transformation.

Ghostly red moons act as scatters, and when three of those align, the bonus spins TERROR begins. The game activates a game selector. When a player clicks stop and the game randomly picks one of the four different Wild features.

Overlay Wild symbol randomly appears on reels 1-3 in every spin and works the same as the active Wild feature.

During the Pick-and-Click feature…

… the hunter becomes the hunted. Players stand to win x5 – x50 the bet. This feature is activated when 3 Bonus symbols appear on the reels in the main game. The symbol is represented by the brave and plucky werewolf hunter. These Bonus icons can hit reels 1, 3 and 5.

I don't really understand why NetEnt are releasing new games which are not really new games, but a changed version from their hold hits. I think that they can add or change at least a bit of feature, but, as I see, this game has no improvement. And I kind of feel that this game pays out too low.

"If you have ever wondered what it’s like being a hungry wolf-like creature" Yes, accurately describes my current condition)).

It’s like the scariest horror movie I’ve ever seen, hats off to the studio for excellent graphics and gameplay.