Spinmatic Dives Deep Underwater for the Riches with Poseidon Xtreme! 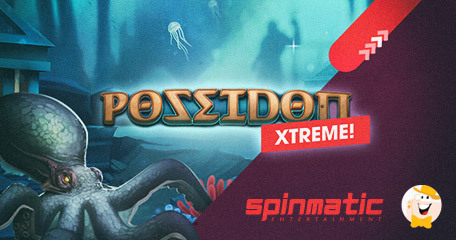 After giving us Patanjali Chakra in February, the leading developer and supplier of premium casino games, Spinmatic is finally back to roll out another player-favorite and dive deep into the ocean with Poseidon Xtreme!

The most extraordinary detail about this new title is its RTP, seeding at an astonishing 99%.

Unlike the studio’s last slot game from February, Poseidon Xtreme offers players a chance to go deep underwater and visit a mystical city that holds the secret to Poseidon’s riches. Vivid and vibrant, the latest title from Spinmatic Entertainment is brimming with mermaids and sea life, giving ardent sea explorers a chance to see the ruins and search for a fortune as big as the ocean itself…

On their quest, though, seafarers will have to face Kraken, the enormous mythological octopus who guards the treasure. Nonetheless, they could beat this monster and increase their winnings through the enticing double or nothing feature where one must guess the correct color.

The infamous gamble feature is joined by wild with a payout, as well as standard scatters and free spins, appearing in various combinations over a 5x3 reel set accompanied by 9 fixed paylines.

According to Spinmatic, the fabled underwater world of Poseidon has long been a globally popular theme, primarily thanks to the ancient Greek genre. Poseidon Xtreme is also the latest title in the series, boasting the highest possible RTP this industry has seen, seeding at the incredible 99% or more!

For those players that are less familiar with “The Xtreme! line up” it might come as a surprise that it presents Spinmatic’s upgraded roster of classics, featuring the most appealing RTPs around. On top of that, the provider always chooses its top-rated slots to ensure the upgraded versions are built on success right from the start!

“By selecting players’ demonstrated favourites, we guarantee the popularity of our Xtreme! games, which have shown remarkable success over and over again thanks to their unique status as the highest-paying slots ever,” explained a representative of the Malta-based software company.

Watch out for Meteoroids and Sizzling Coins!

In the upcoming weeks, Spinmatic is getting ready to roll out two new titles – Meteoroid and Sizzling Blaze Jackpot. If you fancy stargazing and meteor showers, gear up for the biggest prize of up to 1000x the bet before it explodes – it’s a fast-paced crash game with a space theme and a 97.06 RTP, by the way!

The industry’s most fiery and famous feature, the Jackpot, comes a bit later with the launch of an upgraded version of Sizzling Blaze – a game that lets you travel to the past to earn the biggest rewards and prizes and experience an unforgettable journey to wealth…

“Poseidon Xtreme is also the latest title in the series”

What a powerful slot from Spinmatic. Can’t wait to try it!