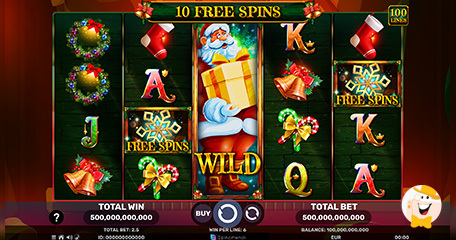 The fastest-growing iGaming supplier and slot developer, Spinomenal, is back this month with two new titles that celebrate Christmas.

Three years after launching one of its greatest hits around Yuletide, the studio has finally revealed a worthy festive sequel, called Wild Santa 2. The second game, Reindeer Rampage, is coming a bit later this December.

A New Wild Trip with Santa

As many renowned gambling software companies start to reveal this year’s Christmas-themed slots, Spinomenal has decided to join the race and present its latest deal with Santa to bring a lucky Noel.

The rapidly expanding studio is inviting all players to take a trip with Wild Santa on a new quest for presents and festive cheer, now packed with even more honorary spins, bigger multipliers, and higher bets per spin!

As the merry Xmas story unfolds on a 5x4 reel set with just 10 pay lines, players will discover a fresh line-up of wild symbols that completely cover a randomly selected reel on each spin. There is also the bonus buy feature, available in some jurisdictions for now. The number of minigames ranges between 10, 25 to 100.

Among the other symbols on the grid are also Christmas reefs, tasty peppermint sticks, golden bells and stockings. Wild Santa 2 now features a melodic backdrop of chimes and bells, including a Christmas fanfare that brings even more joy during the holidays.

Wild Santa 2 also has a scatter, while any 5 wild symbols on a winning line pay x3,000 per line. The game is based on a medium variance math model which makes it a perfect Christmas slot for novice players and more experienced veterans.

“The Christmas and New Year season is one of our favorite times of year and I’m so glad that we get the opportunity to spread some of our festive cheer with this new, fun-filled game,” stated Spinomenal’s CTO, Omer Henya.

Reindeer Rampage up Next

The next game from Spinomenal at the start of the festive season is called Reindeer Rampage. It was released on 8 December to take players away to frosted lakes and snowy mountains.

The seasonal graphics are also accompanied by 10 pay lines, as well as up to 1024 adjustable ways and the magical rampage symbol. It has the power to trigger a bonus of up to x1000 per line.

At long last, this vibrant and highly immersive winter slot wouldn’t be perfect without a selection of sounds performed by a dreamy classical orchestra. Its melodies transport the player straight to an icy wonderland full of super jackpots and progress bars for a true rampage of medium symbols.

Go ahead and check it out!

“Spinomenal gets into the Christmas Spirit with Wild Santa 2!”, europeangaming.eu, December 6th, 2022.

Spinomenal is full of surprises this month and with so many festive slots it’s going to be a cheerful Christmas indeed! Hope I’m gonna win something big!!