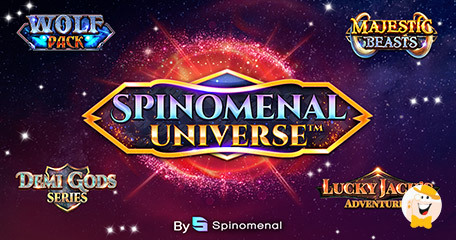 After revisiting history earlier in April with Times of Egypt: Pharaoh’s Reign, Spinomenal is back to present its revolutionary shared Universe project featuring three new titles.

The leading iGaming content provider is launching Demi Gods IV – Thunderstorm, Wolf Fang – Iron Wolf and Majestic King – Sunset all at once, so gear up for a mighty clash of slots all throughout May!

Grand Premiere as Part of the Network Tournament

Although the games will be introduced in the month ahead, Spinomenal has promised to include them into the Network Tournament campaign.

It is the studio’s first grand premiere of an entire franchise and universe since releasing Origins of Lilith, Book of Sirens and Easter Gifts, meaning that players will be able to immerse themselves in a new world with their favorite characters – who now coexist in the same realm…

As highlighted, this innovative project from Spinomenal, who recently acquired ISO 27001 certificate, is powered by state-of-the-art technology that combines promotions, activities and growth strategies into a seamless plan for future releases.

In relation to the universe, each new title has evolved from the far-reaching and increasingly popular adventures within the immensely sought-after hits like Demi Gods, Wolf Pack or Majestic Beasts.

On a side note, among the promotional activities will be prioritized Network Tournaments, as this is where players have huge chances of landing the prize pool total, ranging up to EUR 30,000 or more.

As announced, the first game to go live will be Demi Gods IV – Thunderstorm. This tournament takes place on Monday, May 2nd 2022.

“Players have come to adore the leading characters from our series and we wanted to take that to the next level by introducing our Spinomenal Universe concept.”

He also added that the company’s industry-first game series will immerse players in new storylines with different worlds, while the tournament will feature even bigger prizes each month.

Launched this month, the Spring Grand Festival has already awarded the first 100 players with a share of EUR 15,000 in round 1. So far, participants competed by playing the provider’s famous releases like Book of Demi Gods II, Majestic King, Wolf Fang Winterstorm, and more.

However, the second round, that went live on April 19th, features a different selection of participating games. Among the most popular titles are Book of Rebirth, Story of Egypt, Times of Egypt: Pharaoh’s Reign and so forth.

In this round, our players received 1 score for any 10 spins they made in the following games: Book Of Demi Gods II, Majestic King, Egyptian Rebirth II, Story Of Egypt, and more!

The first 100 players in the leaderboard shared a prize of €15,000 so if you’re ready for the final round, tune in, since it is only live until May 2nd.

Compete over a prize pool of 30,000 EUR and use credit points you earned during rounds I and II to beat the competition in Book Of Demi Gods II, Majestic King, Book Of Rampage, Lucky jack – Tut’s treasure, Blue Panther and Spinomenal’s latest release, Savanah’s Queen!

“players will be able to immerse themselves in a new world”

That is very ambitious from Spinomenal. I hope this proves to be a good move for them.

Launching three games at once is a great decision, can’t wait to see what they’re bringing to the table!