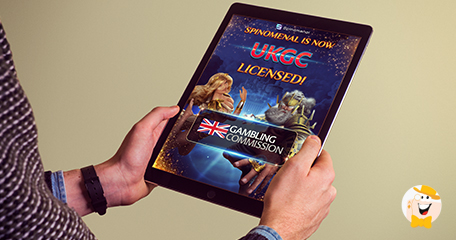 One of the most rapidly developing iGaming content providers on the market at the moment, Spinomenal, has secured a B2B license from the UKGC. This step will allow the provider to chase its strategic goals within the world’s most prestigious market, allowing it to position itself better in the industry.

As announced, the company’s versatile and rich roster of slots will become available for UK operators within the next days. The line up will include Lucky Jack - Lost Jungle, Wolf Fang, Demi Gods III and the revolutionary shared Spinomenal Universe.

The star content provider, as some like to call it, now boasts gaming licences in some of the most favored regulated jurisdictions. Among the most recent breakthroughs before getting the UKGC license are Malta, Sweden, Netherlands and Romania, but the studio is live in many other countries too.

Under the terms of this license, Retro Gaming, a classic slots studio powered by Spinomenal, will also be in position to extend its reach within the UK. This will give the company an incredible wind in the back and allow its partners to diversify the offering with a new entertaining content.

“Securing our UK gaming licence is a huge moment as it allows us to share our outstanding slots library with partners working in this prestigious market,” commented head of partnerships, Olga Sirokha.

She also said that the Retro Gaming project is gaining momentum on the market and that the time is right to accelerate its growth with UK-licensed operators. This up-and-coming provider is a licensed studio that specializes in classic familiar slots powered by Spinomenal technology. Its games are developed to suit the simplest and most convenient gaming experience by the way.

Back in October 2021, Spinomenal has also secured a license for Spain and Colombia, while one month later, the company entered Serbia, Lithuania, and Belarus.

If you’re up to date with the studio’s highly popular Grand Holidays Tournament with a €500,000 prize pool, you may want to know that the round 5 ended on 10 August.

During the last series, players enjoyed titles within the famous franchise Legends of Egypt, such as The Ankh Protector and Story of Egypt! As a result, the first 100 players in the leaderboard shared a prize of €15,000 but that’s not all…

Players of Folktales slots like Baba Yaga Tales, Hut with Chicken Legs, Kitsune’s Scrolls, and so on, also managed to scoop another €15,000 so… get ready for the next round as soon as Spinomenal makes the announcement!

Among the most recent games from this provider are Hawaiian Bliss, 1 Reel Buffalo, MMA Champions, 1 Reel Demi Gods III, Kitsune’s Scrolls, and Baba Yaga Tales. On a related note, the company released 6 slot games during the last several months.

Nice of them to drop by! Was looking forward to seeing some of their work, Demi Gods are my favourite!

This news is great for the studio, but I believe they need to wake up! I haven't played any of their games in a long time, and they shouldn't be so far behind the competition.