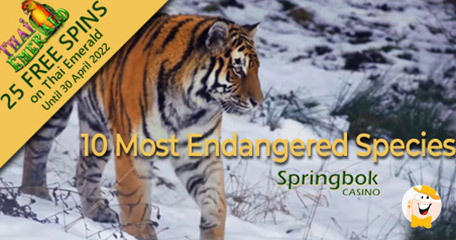 Springbok Casino really cares about animals and their well-being. While human hunting and the destruction of habitat become more frequent, some animals are close to extinction. To raise awareness and reverse the trend, South Africa's brand has unveiled information on the top 10 Endangered Species.

At the same time, Springbok Casino has prepared another offer for its users, 25 bonus spins on the Thai Emerald by April 30th.

"Humans are responsible for the sharp decline in these animals' populations. It's up to us to turn things around. It's not too late!"

When it comes to endangered species, the pangolin is among the most trafficked mammals on Earth. These animals are regularly killed and sold for use in African and Chinese medicine, and their total number has decreased by 80% in the previous 20 years.

Going forward, poaching and loss of habitat led to the extinction of rhinos and now there are only 67 Javan species in the globe and just 80 Sumatran rhinos.

The vaquita porpoise is another endangered mammal on the globe, with just 10 individuals left as the result of using massive floating gillnets. This is followed by Hawksbill turtles that are jeopardized ever since the ancient Egyptians and Romans.

Known for its slow moves, the pygmy three-toed sloth is also at risk and its mangrove habitat slowly disappears. In addition, the Asian Snow Leopard was attractive to humans due to its snow-shoe paws and sophisticated fur, so they are also close to extinction.

The demolition of the tropical rain forest in both Borneo and Sumatra is the cause of orangutans’ extinction.

If we take look back a century ago, there were about 80,000 roaming through India. After trophy hunting and their use for rugs and coats, only 3500 are left.

What About the Promotion?

As part of the latest deal, Springbok invites players to enjoy the Thai Emerald slot from Realtime Gaming and claim 24 casino spins. Here are the details:

Springbok Casino is a cutting-edge South African online casino, with several slots and table games, played in rands. Customer support is available in English or Afrikaans.

“Springbok Casino has prepared another offer”

Springbok Casino never disappoints. Glad us Canadians have access to this South African brand and I'm glad I'm a part of their Casino.. :)

Thanks for the great promotion, Springbok Casino!

Great offer for players. I think that people deserve to know more about endangered species so we can give our support to protect their habitats…