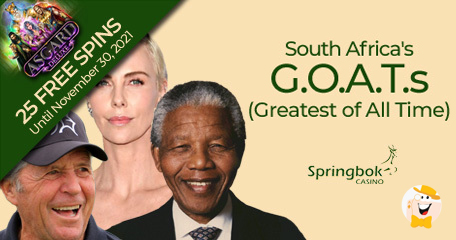 One of the leading South African online casinos, Springbok Casino has prepared an exciting promotional campaign for November 2021. The popular operator pays tribute to a couple of GOATs and treats players with a generous set of 25 complimentary spins on Realtime Gaming’s Asgard Deluxe.

Now, the “GOATs” in question are not the bleating farm animals, but a couple of South Africans who deserve the title of “Greatest of All Time.” This campaign is active from November 1-30, 2021.

"From sports, the arts, movies, music, and politics, as South Africans, we have a lot of great people to celebrate!"

Who Are the “Greatest of All Time”?

Let’s start with Nelson Mandela, as the most respected, loved and famous political figure ever to walk this earth in modern times. This great philanthropist and social rights activist won the Nobel Peace Prize.

In the sports sector…

…there’s Gary Player, the only non-American, and only one of five golfers ever to win the Masters Tournament, PGA Championship, US Open, and British Open. Another one on the list is Jacque Kallis, a cricket player who scored 25,528 runs and took 577 wickets.

Moreover, Jody Scheckter is the only South African to have been successful in F1, winning 10 Grand Prix races and the World Championship in 1979. Worth mentioning are marathon winner Bruce Fordyce, rugby fullback Percy Montgomery and long-distance swimmer Lewis Pugh.

…there’s world-famous Charlize Theron from Benoni, the recipient of numerous accolades, including an Academy Award, a Screen Actors Guild Award, and a Golden Globe Award. Finally, Master KG’s very catchy “Jerusalema,” done in cooperation with Nomcebo, the upbeat gospel-influenced house song, became a world hit in 2020 and secured his place among SA’s GOATs.

How to Collect Bonus Rounds?

As hinted in the introductory part, the popular SA operator grants 25 bonus spins on Asgard Deluxe, courtesy of Realtime Gaming. To grab the gratis rounds, players should enter a bonus code: GOATS. The promotion is running for the entire month, so there’s more than enough time to participate, if interested.

…it’s a beautifully illustrated homage to Nordic culture. Associated with gods, this location appears in a multitude of Old Norse sagas and mythological texts, but slot games aren’t excepted from it.

Exploring the features, punters shall spot Wild, which acts as a replacement for all the other icons, except for Scatter and Multiplying Wilds. Scatter can initiate complimentary rotations with Picking Bonus round, while Multiplying Wilds replaces doubles the prizes when found in winning combos. Also, it serves as a substitute for the entire set of symbols, except for Scatter.

Other than this feature-filled release…

…Springbok Casino accommodates a plethora of attractive titles delivered by RTG. Customer service is available in either English or Afrikaans. Rands are accepted, as well as players’ favorite digital currency- Bitcoin.

Take a look at the amazing videos celebrating each of these great South Africans, and let us know is there are more people that you think deserve to be listed among GOATs.

“an exciting promotional campaign for November 2021”

A nice story lies behind almost every bonus that Springbok offers to its loyal customers. It's always nice to get to know a little bit of history and the most interesting facts about a country. Thanks, Springbok for that.

They are preparing innovative promotions monthly, usually animal-related, but this time they used GOAT initials in an amazing way. Definitely, we should claim this one, we have the rest of the month to be awarded free spins. :) Good luck

Interesting promotion, South Africa really has a lot of successful people in sports, art so as political activism

Fantastic offer! Hurry up LCB'ers, don't miss this one!

Great news! Thanks for this amazing promo!

Excellent promotion, as always, with plenty of interesting information and insights.