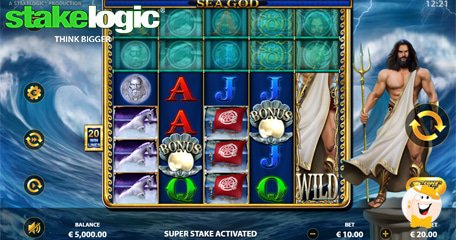 Following the great success of Viking Smash, a Norse-themed online slot with Wandering Wilds, Stakelogic has prepared another surprise for its fans. This time, the studio takes punters across rough and violent seas in search of untold wealth, giving them chance to meet Sea God.

With its towering structure, this marine adventure comes with up to 45 win lines, medium volatility, and an RTP of 95.21%. Filled with a variety of immersive features, this release, done in cooperation with Reflex Gaming, is all about action.

Would you like to take a closer look at Stakelogic’s Sea God slot? Stay tuned!

According to Salvatore Campione, Head of Greenlogic® at Stakelogic, thanks to striking yet calming serene graphics this addition is bound to be well-received among international clientele. Its evergreen theme, in combination with striking illustrations and animation, enriched with authentic sound is what makes this game distinctive.

…this project was completed in partnership with Reflex Gaming, a team of talented developers, artists, and designers who share the same ideas and visions as Stakelogic.

Commenting on the presentation of the newest installment, Mat Ingram, CPO at Reflex Gaming, said:

“For our debut release through the Greenlogic® program, we knew we had to create something special. The oceans have a majestic and mysterious vibe, combine oceans with the mighty power of the Greek God of the Sea, and we bring you, Sea God.”

Worth stressing out is that this game…

…has a max win multiplier of 1,162x the player’s stake. On top of that, it is available with three different return to player percentages. The theoretical minimum is set at 95.21%.

Starting June 3rd, 2021, this release was made available to more than 500 operator partners.

Let’s Talk Features, Shall We?

When 3 or more Scatters hit the reels, they initiate a special bonus, where punters get up to eight complimentary rounds. If the Scatter icons appear on the center reel while this mode is on, Super Reels are initiated and the game matrix expands to 5×9 reels, awarding one more portion of bonus spins.

…Super Reels are activated randomly during the base game. When that happens, the grid expands from 5×4 to a jaw-dropping 5×9. As a consequence, the number of paylines grows from 20 to 45. Players receive three rotations on the Super Reels, with the frequency of Stacked Symbols increasing for the duration until they crash back down to the base game.

…in September 2020, this inventive feature was revamped, and named Mega Super Stake™. In this version, it lets players place a side bet with every spin, allowing them to multiply each bet x2.5. The Lion Gold slot was the one to premiere this enticing component.

Have you already been to the heart of the storm and had a couple of rounds of Sea God slot? Share your impressions with us, hit the comments section below, and gamble responsibly!

“Stakelogic has prepared another surprise for its fans”

Great set of features, indeed! Topics like this are always popular, and Stakelogic certainly knows how to make most of them!