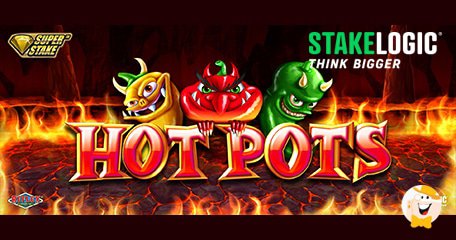 Forward-thinking provider of casino slots, Stakelogic, has once again joined forces with Reflex Gaming – the provider of top releases Sea God, Jurassic Jackpots, and Guido’s Gold. Based on the new deal, they will release the latest game, Hot Pots.

The newest slot from Stakelogic comes up with different features such as bonus Spins, respins, and 3 wild modifiers. The main action of the game takes place across a 5×3 board and 20 paylines. Players are invited to discover the depths of hell, where they can reveal hot chilies across the reels. As you spin the reels, you will see an orchestra playing a waltz as lava erupts and symbols remain in place. The maximum multiplier in the game is 3,000x available if you fill the board with Hot Pots logos.

On any spin, users will have the opportunity to trigger a special hot chili element, which can activate one of three Wild Boost modes. The initial mode is Rivers of Fire, which will include between 1 and 4 stacked wilds to the gaming reels. The 2nd is Wild Fire, which converts between two and eight random elements into wilds. The third and the most profitable is Red Hot Wilds, which behaves in an identical way as Wild Fire, but with the added incentive that all wilds also include a bonus multiplier.

In addition to 3rd base game Wild Boosts, customers will also be able to activate the main Bonus Spins feature by triggering the cauldron scatter, super scatter or mega scatter elements on reels 1, 2, and 3. Based on the combo they land, users receive anything between 8 and 16 bonus games as well as an immediate payout of up to 50x the stake.

Speaking on the newest game, Head of Greenlogic® at Stakelogic, Salvatore Campione, said:

“Our Greenlogic® partnership program has enabled us to team up with some of the most exciting game studios in the industry, and we’re thrilled to be able to bring players another red hot release from Reflex Gaming. With its fun theme and fiery features, the slot looks set to be the perfect winter warmer for players this Christmas.”

CPO at Reflex Gaming, Mat Ingram, says that the last two titles through the Greenlogic® program have been Greek-inspired (Sea God and Midas Wilds). This time, the company wished to go for an additional light-hearted feel, and everyone wants a bit of spice. In addition to it, the math models are created to appeal to a wide range of customers.