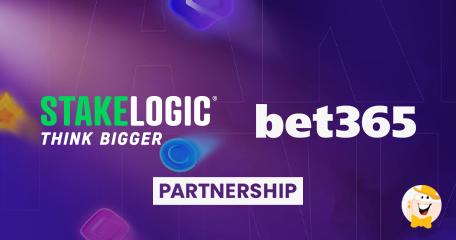 Stakelogic, one of the most recognizable casino software providers, continues to fulfill its global expansion plan, thanks to a new partnership!

The developer has repeatedly expressed its desire to reach the top of the list of the best providers in the industry, but lately, we could also see its desire to conquer the Dutch market!

And after numerous collaborations with casinos operating in the Netherlands, Stakelogic continues to expand in this jurisdiction thanks to a new deal!

The developer proudly announced that it has joined forces with the popular casino bet365 to confirm its presence in the Dutch market, but also in Europe!

As stated in the contract, Stakelogic will bring to the platform of its new partner an array of impressive and engaging online casino releases, including a collection of classic slots as well as modern video slots!

This means that players from the Netherlands will now have the opportunity to engage in their favorite form of entertainment with some of the most sought-after games in the industry and guarantee an unforgettable iGaming experience!

The operator will take numerous nostalgic classic slots including Classic Joker 5 Reels and Hot Joker which have proven to be favorites among this audience!

Also, on bet365's platform, you will be able to explore some of the modern and unique video slots including fan-favorite Candyways Bonanza Megaways 2 and Bandits Thunder Link!

Olga Bajela, CCO at Stakelogic, said: "Our games have taken the Dutch market by storm and this deal with bet365, one of the biggest operators in the world, is a testament to their quality and that they are now a "must-have" titles for operators targeting the market. Our classic slots in particular have been a big hit with players in the Dutch market and we are thrilled to be helping bet365 grow its classic portfolio with our games. This is a great deal for us, for bet365, and most importantly for its players."

Stakelogic is a well-established iGaming content provider known for its impressive and wide portfolio, as well as its live casino division Stakelogic Live.

In a short time, the brand has entered numerous markets thanks to major partnerships, including one of the most recent ones concluded with Betnation!

On that occasion, the developer brought plenty of classic slots and modern video slots to the Netherlands, including hits such as El Cowboy Megaways, Hola Frutas, and Wild Moon Saloon.

Through these titles, punters could also benefit from the Super Stake feature, which is also included in this agreement!

I am sure that this will be a long-term collaboration, nothing less is expected from these two serious brands