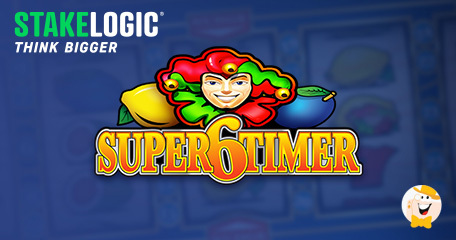 After establishing a series of classic traditional slot machines, the fast-growing Dutch provider of in-demand online casino content, Stakelogic, is back to unleash yet another thrilling title to complement the franchise.

Players in the Dutch market will now have an opportunity to test a worthy successor to Up6Timer, as the studio went live with its latest nostalgic fruit machine full of retro symbols and jackpots, dubbed Super6Timer.

The latest classic style fruit machine from Stakelogic is equipped with only three rows while the number of reels ranges from three to eight. As expected, you will find all those retro symbols on the grid for a fulfilling nostalgic experience, including oranges, lemons, melons, sevens, jokers, and crowns.

The gameplay is quite exciting too. Players have the option to start one game with five win ways and three reels or switch to six games with thirty win lines and eight reels. Of course, the second option is only for those who want to take the big win potential to the next level.

Now, although Super6Timer is a classic slot like its predecessor Up6Timer, Stakelogic decided to put its own twist on the genre and added Nudges that appear during Super Stake. The studio’s mechanics can effectively double the bet and increase the chance of bonus triggering for insane win combinations.

Mentioned earlier, the Nudge feature is active only on reels two, four, six and eight. In this mode, the reels automatically Nudge up or down when a winning combination can be created. There is a maximum of two nudges per spin, however.

Finally, the game’s Mystery Jackpot is what you should look out for. On every spin, a 0.5% contribution from every bet placed is added to the pot, with a minimum jackpot payout of €500. The pot is guaranteed to payout when it hits its maximum value of €5,000.

Stakelogic has even increased the chance of jackpot triggering once the pot hits €2,500. This happens in four marked stages until the max value is achieved.

Classic Slots on the Rise in Netherlands

Among other great attractions in Super6Time is also the option to gamble winnings with the chance to double the value of the prize. Players must guess if the coin flip will land on heads or tails and doing it right either doubles their win or forfeits the entire prize.

“Classic slots are dominating the Dutch market and we continue to grow our portfolio of these titles so that players can access new games that deliver even more excitement, anticipation and big win potential,” explained Olga Bajela, chief commercial officer at Stakelogic.

She also said that Super6Timer will get the adrenaline pumping at any partner casino mostly thanks to its innovative features such as Nudge, Super Stake, Gamble and the Mystery Jackpot. If you’re into playing a standard classic slot with upgraded player experience, this is it!

“Stakelogic decided to put its own twist on the genre”

I like playing video slots games with a retro look. Keep up the excellent job!

Absolutely love these fruit machines from Stakelogic, they’re top of the league... other slots are great too, don’t get me wrong, it’s just that retro is always cooler haha