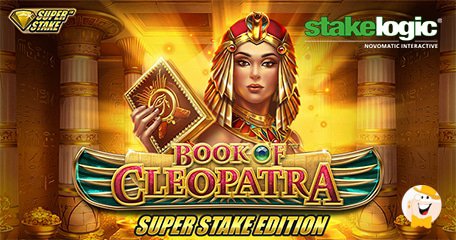 After upgrading a 2018 release, Book of Adventure, Stakelogic continues to implement its innovative and hugely popular feature Super Stake with another blockbuster, Book of Cleopatra. The slot developer has officially re-launched an updated version of its Egypt inspired slot from the same year, which is now hooked up to its groundbreaking system with engaging modes and immersive features.

Even though the revamped edition is based on an older release, the supplier is promising an entirely new player experience which now includes extra spins, retriggering extra spins, the double up option and SuperStake.

True to the Original but Better

According to the supplier’s technical data, Book of Cleopatra SuperStake comes with high volatility. It is played out in a standard configuration with 5 reels and 3 rows, just like the original. The game’s RTP is set at 94.5% and there are also 10 ways to win. Complimentary spins are activated when three or more Wild Scatter symbols emerge on the playboard in any position.

This highlight awards players with 10 extra rotations which are conducted on special reels with expanding symbols, aiming to reach even bigger winning potential. The studio has also rolled out Dragons & Magic in June, capable of triggering a similar lucrative affair.

During this mode, the ancient book opens and reveals which symbol will expand before the extra spins kick off. This symbol automatically expands to cover the entire reel or more reels if a winning combination can be generated with the exact expanding symbol.

To retrigger the level, three or more Wild Scatter symbols must appear anywhere on the reels while the extra spins bonus is active. Only then will the game bring another 10 rounds to players who ultimately have the option to buy the bonus in markets where such functions are permitted.

After every successful win, customers can initiate the double up mode and increase or decrease the number of added rotations. One can either win or lose 5 spins or eventually accumulate 25 complimentary mini games in total.

The major feature in Stakelogic’s latest arrival allows players to effectively double their bet and gain extra chances of hitting incredibly valuable win combinations. For Book of Cleopatra, the provider has imported a coin feature that enables all reels to transform into 15 individual reels where a Bronze, Silver, Gold, Cleopatra or Prize coin can land on any or all of the reels, activating a range of cash prizes unlike any other game in the portfolio.

“Book of Cleopatra™ is the latest title to be reworked and to feature our popular Super Stake™ feature, which adds even more excitement and big win potential to what is an incredible game already.”

Van den Oetelaar added that the studio has done more than just add Super Stake™. The latest release also boasts new extra spins features as well as refreshed design and audio. The producer is hoping that some of these changes will appeal to a new audience as well as the fans of the original who now have a unique opportunity to test out the Super Stake™ mode.

“We look forward to seeing Book of Cleopatra™ Super Stake land in the game lobbies of our operator partners, and for players to start sharing some of the big, huge and epic wins we know the game is able to deliver,” concluded van den Oetelaar.

“another blockbuster, Book of Cleopatra”

Book of Cleopatra, Reimagined with Super Stake appears to be a beautiful game and I wish it had greater distribution than it presently does. Most of the casinos that it is available on I do not play on at present. I guess I will have to consider adding a new casino to my collection if I want to play it. Also, I have those...

Book of Cleopatra, Reimagined with Super Stake appears to be a beautiful game and I wish it had greater distribution than it presently does. Most of the casinos that it is available on I do not play on at present. I guess I will have to consider adding a new casino to my collection if I want to play it. Also, I have those buy the bonus offers, just saying.

Nice addon, I’m sure it will diversify the game’s tempo and refresh its features a bit.