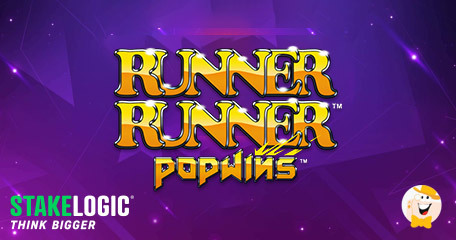 The fourth slot release from Stakelogic for June is racing at a fast pace as it joins the premium line up of other ultimate classics in the series, namely Mega Runner, Joker Wild Respin and Mega Player.

Get ready for bonus spins where you can win up to 10,000x the original bet, while the expanding reels may bring additional ways to play and hit the jackpot. Now, let’s see what else is there in Runner Runner Popwins, the latest blockbuster slot from the studio to hit the shelves.

To Number of Way to Win Starts at 486

Once you get Runner Runner Popwins from Stakelogic going, expect a rising number of ways to win, right in the base game. It starts at 486 while the reels are packed in the standard 3x6 configuration.

However, with each win, the reels can expand to a maximum height of nine, allowing more symbols to appear and form a winning combo, up to 15,552 ways, to be precise.

Wins in this slot are awarded left to right but you can also look forward to hitting a sequence from right to left on adjacent symbols regardless of their size. If you hit five of a kind, the maximum win potential could reach its height at 10,000x the original bet, so…

Prepare for a real turbo-charged classic fruit slot, capable even of doubling the bet to trigger a bonus and allowing players to land incredible win combinations during Super Stake.

This feature enables players to add multiplier symbols to the base game, ranging from x2 all the way up to x100. These boosters can also appear as a result of wins on the reels, by the way.

As the reels expand, you might get drawn into the complimentary spins round too. Once all the reels are filled with six high paying symbols, the feature pops into action. You get a chance to spin the Mega Wheel which sets the number of honorary spins and adds a multiplier to spice things up!

The number of complimentary spins expands from 8 to 15 while the starting multiplier ranges from x2 to x25. It can increase by +1 for each win and +2 if the reels continue to expand all the way to nine.

In some jurisdictions, players can use the Buy Bonus option to trigger extra spins on demand. There are four options to choose from, each with a different max multiplier value, similar to Joker Drop Popwins from October 2021.

“Runner Runner Popwins has been designed to get pulses racing with its fast-paced gameplay and big win potential with each spin,” said Olga Bajela, CCO at Stakelogic, about the latest launch.

According to the chief commercial officer, players will be captivated by the expanding reels feature in Runner Runner Popwins. It not only ensures more ways to win with each spin, but also increases them for a greater winning experience, just like in Joker Wild Respins and Mega Player – two previous releases.

The studio has released one more explosive new slot this month in partnership with Hurricane Games – Dynamite Strike. If you’re a fan of mining adventures with respins, multipliers, retriggers and 3,125 ways to win, give it a go and come back to share your feedback with us!

“expect a rising number of ways to win”

An astonishing number of ways to win and large multipliers rang in free spins give great chances to win.

So many ways to win, yet I always lose hehe. All jokes aside, it's a good game, very forgiving for those unlucky lads like myself. Stakelogic thinks bigger indeed.

A great number to start winnings at :) The winning ways can even go up to 15,552. I am glad this one has a Super Stake feature too which might provide us an opportunity to boost winnings :)

Great addition to the portfolio, a real classic. Looking forward to checking it out!