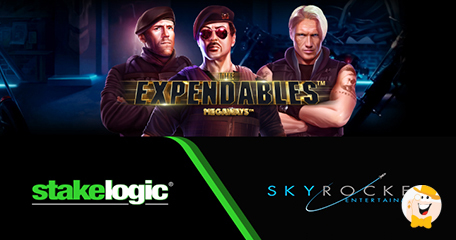 Slot developer, Stakelogic, will launch several games based around blockbuster movies. The branded titles will be launched in partnership with film and media brands entity Skyrocket Entertainment.

According to the deal, the company will design and develop games based on films like The Expendables, Rambo and Hercules.

The Expendables Megaways Coming In February

…which Stakelogic has licensed from this developer. This is company’s first ever foray into the branded slot market.

23rd of February is the release date of The Expendables Megaways. While the rest of the blockbuster slot series will come out later in the year.

“We are excited to enhance our game portfolio with our first series of branded slots.

We have secured some of the biggest brands in the movie world which simply would not have been possible without partnering with Skyrocket.

We have some incredible things planned for these brands and look forward to launching Expendables Megaways next month.”

“We are delighted to be working with Stakelogic, a fast moving and exciting company. Their talented team bring the energy and creativity to deliver epic games – which is the perfect fit for Skyrocket and our global film brands.”

…with the first game to feature this mechanics being Black Gold.

Stkaelogic CEO has said that the company is looking forward to producing games with the Megaways engine as they will surely prove to be a big hit with players.

…LCB has conducted an interview with Stephan van den Oetelaar which can be read in its entirety at this location.

In it, the company’s chief spoke about the new and up and coming products by this reputable company.

“games based on films like The Expendables, Rambo and Hercules”