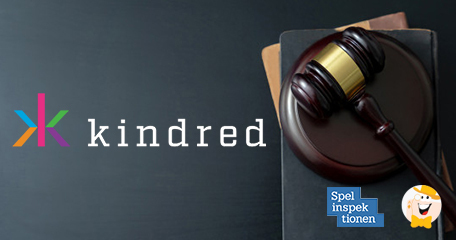 Swedish Gambling Authority (Spelinspektionen) has proclaimed that they have imposed an SEK 100 million fine against Kindred Group for not complying with the Swedish Gambling Act laws regarding bonus and other incentive offers.

This breach of regulation dates back to early 2019, when Swedish regulated gambling market was still quite new (it opened on January 1st 2019).

Kindred’s wholly owned subsidiary, Spooniker Ltd, has received an official warning, beside the financial penalty for offering customers financial bonuses that are not allowed according to laws and gambling legislation of Sweden. Some of their competitions and promotions must be regarded as financial incentives – that is, as bonuses.

Kindred has interpreted these bonuses differently, at first point…

…but Spelinspektionen has disputed this after which the company adopted a more restrictive interpretations of Swedish laws in the spring of 2019.

Kindred has said that it will appeal against this decision by the regulator. The company will continue with the adopted interpretation as recently issued warnings and fines issued to other license holders are enforced in court.

…and said it creates “unnecessary ambiguity.” Kindred says it would wish more clarity in this regard and “will continue to improve the operations to ensure full compliance.”

Kambi Grows in the US

Recently, Kambi has further expanded in the United States with jurisdictions of Iowa, Mississippi, New York and New Hampshire.

The company has published financial Q4 2019 report that shows a stable growth and a positive trajectory beforehand. The brand was already operational in Pennsylvania and New Jersey and their EUR 92.3 million revenue is, in part, thanks to the successful integration in the USA.

Another Live Casino Launched in Sweden

Soft2Bet’s YoYo Casino has been successfully launched in Sweden in mid-March.

The casino will feature the live dealer section as well as a range of welcome bonuses for new members.

“Our first launch in Sweden is a historical moment for Soft2Bet, and a product of uncompromising dedication from our executives and our team.”

Expanding our customer base is of the utmost importance at Soft2Bet, and we look forward to offering the YoYo experience to our Swedish audience.”

I like that the Swedish and UK regulatory bodies penalize non-compliant casinos. The rules for all casinos are the same and should be followed. I also like that the fines are extremely high for casinos that break the rules. Kudos!

taking aside Spelinspektionen's ambiguity, I think Kindred got their long-deserved 'punishment'

Spelinspektionen also found that some of the online gaming operator’s local subsidiaries had been offering lotteries which is not covered by their licenses. But it managed to get away with just a warning from the gambling operator.

They do and they are - but there's been a LOT of mention of their laws being very ambiguous and unclear. Kindred are not the first to use this argument and there might be something about it.

Swedish Gambling Authority seems to take a very serious approach to analyze casinos operating in Sweden. They are currently quite restrictive.

The list of operators fined by Swedish Gambling Authority is getting longer. Hopefully, the other operators will learn something out of this and ensure full compliance with these regulations.

This Swedish law seems to be very ambiguous. A lot of operators have said the same.