Swintt Beams Back into Action Before Christmas in Santa vs Aliens! 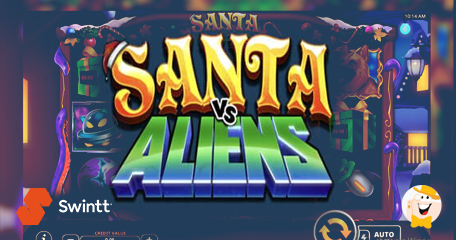 After making the Christmas season warmer and merrier with Golden Reindeer on 7 December, the industry’s most popular slot provider returns to once again dash through the snow in a new sci-fi-themed release with futuristic features and out-of-this-world prizes, called Santa vs Aliens!

If you think you’ve seen it all for the holidays, get ready for a hot-shot surprise from the producer of recent hits – Book of East and Rock N Ways XtraWays. Swintt is beaming back into action unexpectedly all throughout December with a release that offers a quirky new take on the classic holiday genre.

Designed to become one of the most original titles this winter, Santa vs Aliens invites players to join forces with a pumped-up Santa who uses festively-themed gadgets to save Christmas from a fleet of marauding Martians!

Unlike in Golden Reindeer, players will have to face some neighboring space invaders who are hell-bent on ruining the holiday season, so if you’re in for some fun, comic-book style visuals, have a shot at them on a 5x3 grid by forming unique line-ups of symbols such as bauble grenades, bladed candy canes and explosive presents.

Each carefully crafted projectile can help you set the tone for a truly out-of-this-world adventure, capable of cashing out top prizes up to 292x the stake.

The game’s highest value symbol is, of course, the heroic Santa himself. Apart from stepping in as a substitute wild for any regular symbol to complete a winning sequence, musclebound St. Nick is ever-present throughout the base game on the slot’s central reel.

As a central highlight, he improves the slot game’s payout frequency and even spawns additional wilds at the end of random spins to help players trigger even bigger rewards.

The other important symbol to look out for is the purple alien scatter. It represents the key to accessing the game’s main highlight. It starts by landing three or more bonus images anywhere on the reels during a single spin. The round takes players to a new screen with a wheel.

Players are prompted to press a button to set the wheel in motion here, with the pointer stopping on either a prize multiplier or a number of free spins. During this level, maximum multipliers can reach 100x the stake combined with up to 20 complimentary rounds.

“Swintt has always led the way when it comes to producing original titles – and this Christmas we’ve gone all out with our quirky Santa vs Aliens slot. The game provides a fresh spin on the standard Christmas fare, with a range of colorful characters and rewarding features making it an unforgettable extra-terrestrial adventure for players to enjoy,” commented David Mann, chief commercial officer.

Just when we thought that the provider has completed its roadmap for 2021, Swintt got back on the horse in El Andaluz, inviting players to once again saddle up for a new Spanish-themed adventure and spice up the holidays!

Having already treated players to a classic western story in Lone Rider Xtraways earlier this year, the rising star of software development is ready to launch another action-packed cowboy shooter this month and take us to slightly warmer climes of southern Spain…

Tune in for more news about the game coming soon!

Oh my, too many Christmas themed slots! Lets see which one will take my money first...

This is one of the coolest ideas for a Christmas slot game. Santa will save the earth!

Christmas themes always look so exciting and this game seems very interesting to me. Features are great! Good luck and have fun LCB'ers! :)

Santa, as a superhero, great idea indeed. I'm eager to try it out. :)

Already back with a new Xmas game??! This house is rockin!!