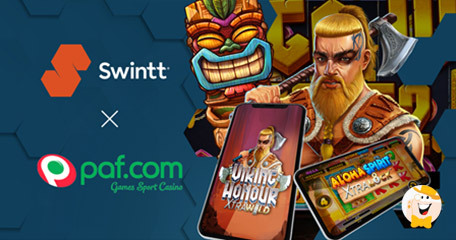 Right after opening an exciting new chapter in Book of Dino Unlimited on 3 March, Swinnt returns with a new announcement about expanding its European presence – the up and coming studio is joining forces with Paf Casino to launch its premium and select slots in key emerging markets.

Thanks to some earlier deals in Estonia and Latvia, the provider has successfully continued to bolster its presence in the Baltics with a major operator who has served as Swiss Grand Casino Luzern's strategic online partner for two years now.

Focusing on Players in Scandinavia

As the latest report reads, Swintt and Paf will base their collaboration on the award-winning titles from the provider’s premium and select game catalogs. The popular online gaming site will mainly focus on players in the Nordics, since it represents one of the best-known brands in Scandinavia.

For those of you less familiar with Paf Casino, we’re talking about a gambling operator based on Finland’s Åland Islands. It is owned by the regional government and the company distributes around €20m in funds per year to support health, culture, education and sustainability projects in the region.

On top of that, Paf provides a range of slots, casino and poker games in a number of key iGaming markets.

The operator’s versatile line-up of services should be significantly bolstered after integrating Swintt’s games, since the industry’s most popular online gambling supplier committed to rolling out its entire suite of 120+ titles. Under the terms of the agreement though, all future releases will be integrated into the platform too.

Furthermore, some Paf players in numerous European countries will be trying out Swintt’s innovative collection of slots for the very first time. Swintt Select is now full of traditional premium releases, since the provider increased its production tempo after being recognized as the “Rising Star in Casino/Innovation” in 2021.

Among its many famous titles are Rock N Ways Xtraways with a unique pay system that gives players up to 262,144 ways to win as well as Aloha Spirit Xtralock that comes with a revolutionary new jackpot system capable of awarding multipliers up to 200,500x the bet.

Continued Growth for Both Market-Leading Brands

As stated by David Mann, chief commercial officer at Swintt:

“Paf is undoubtedly one of the best-known brands in Scandinavia and the Baltic region, and we’re thrilled to be able to debut our full catalogue of slots on their platform.”

The CCO continued by saying that the latest agreement would help Swintt to significantly strengthen its presence in several key iGaming sectors where Paf is available, giving players a chance to finally take some of its award-winning games for a spin.

In the meantime, Eric Castro, head of content, casino & games at Paf, commented that Swintt has established itself as one of the industry’s premium software providers on the market in the past two years.

The operator is delighted to welcome another premium supplier on board and hopes to offer many new and exciting options to players that will cement Paf’s reputation known for high-quality entertainment.

“committed to rolling out its entire suite of 120+ titles”

It's great knowing that Swintt has been extending its presence in Europe. By conquering new markets, Swintt creates greater opportunities for big success.

Great news for the players in the Nordics, Paf is a good brand and there are some really cool slots from this provider too.