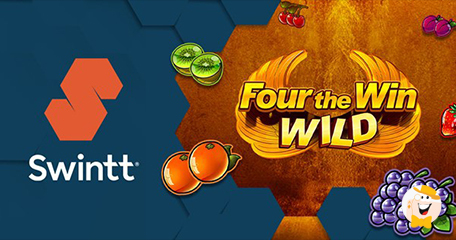 Cutting-edge supplier of casino games and innovative star in the industry, Swintt, has just added another powerful game to its extensive suite, Four the Win Wild.

This is another good chance to claim excellent awards on the game with 81 winning ways and wild multipliers that can enhance up to 8x.

Swintt has just claimed an award for the winner of the Innovation in Mobile category at the EGR Global B2B Awards 2022. This is another game from the Premium selection which promises to supply players with incredible winnings.

Four Win Wild is a retro-inspired title that can be enjoyed across mobile and desktop devices. It blends elements from traditional land-based games and includes fruit elements across four reels, with lucky sevens and multiplier wilds filling the paytable of the game.

The last symbol on the list is what gives the game its name and allows players to get the 2000x the bet. Wild symbols replace any other icon in the game to form winning ways. In addition, single wild doubles the value of any typical pay table win, while two wilds will quadruple it. By landing three wilds in one spin, you can hit an 8x the prize!

The latest game from the provider comes with an RTP of 95.12%, featuring 81 winning ways. It is also possible to land 3 or more identical elements on neighboring reels in any place to get a prize, with the largest win being the one that’s paid.

Swintt also has a Risk feature coming into force after any winning main game spin. It allows users to double or quadruple the current award by guessing the color or suit of a playing card, with several rounds available.

David Mann, Chief Commercial Officer at Swintt, says that with simple mechanics and creative gameplay, its Premium Slot suite has always been fit for fans of mobile players. The company has just earned an award for the category - Innovation in Mobile category at the EGR Global B2B Awards 2022. They are looking to create on this success with one more mobile experience - Four the Win Wild.

“As the latest addition to our Premium line-up, the new game combines all the elements of land-based slot machines that players know and love with 81 fixed ways to win and massive multipliers of up to 8x – and we’re certainly expecting it to be a popular addition at all online casinos hosting Swintt slots.”

This game looks stunning and players will enjoy this incredible journey…