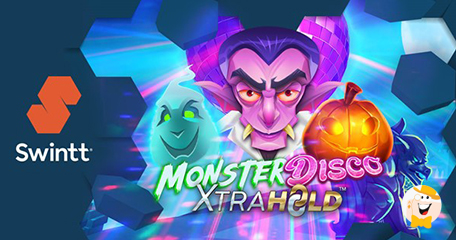 Award-winning software provider, Swintt, has just enhanced its suite with Monster Disco XtraHold. The game is a perfect chance for Halloween lovers to get into the action and claim colossal awards.

Get started with the regular action across a 5x4 layout with 25 paylines. When it comes to included symbols, you will see Dracula, a ghost, and undead disco dwellers. The main action takes place in the enchanting mausoleum next to the tombstones, with the typical ace-through-jack playing card values filling the typical line of the game.

If you are searching for special elements, this will include Monster Disco XtraHold gold vinyl disc alongside a bite removed from it. In addition, you will see the super scatter symbol. Wild is the most valuable symbol that increases the excitement by replacing any symbol of the game. On the other hand, if you land 3, 4, or 5 scatters, you will trigger 5, 8, or 10 bonus spins.

During the Bonus Spins feature, the central three reels of the game will be merged to deliver an incredible 3×4 Mega Symbol. The biggest win will be provided by landing five-of-a-kind sequences and activate incredible pay-outs. Match three or more scatters and you will also re-trigger the Bonus Spins, to prolong the bonus feature and support players to win more.

The gold vinyl disc element will trigger the signature XtraHold feature – a bonus that first appeared in Mystic Bear XtraHold. To activate this incredible feature, players are required to hit at least 6 gold discs on the reels. At this moment, they will start spinning to reveal cash awards and starting three re-spins.

As soon as you enter the XtraHold feature, the re-spins counter will lower by one place after every new round. If you hit any subsequent gold disc, it will reset as you move on with spinning. This process will continue until either no new vinyls are included, or players fill all 20 spaces on the reels. At this moment, the Monster Disco Mega Bonus award of 10,000 x bet will be delivered.

“To get players in the mood to raise some hell this Halloween, Swintt are inviting all slot wizards, witches, and warlocks to come and shake their stuff on the haunted dancefloor of Monster Disco XtraHoldTM – a spooky new slot in the Swintt Select range.”

According to his words, having the popular XtraHold mechanic that they debuted a few months ago in Mystic Bear XtraHold and a Bonus Spins feature that comes with massive 3×4 Mega Symbols, the slot guarantees a great experience for all players while also delivering ever-increasing awards to literally weak the dead.

It's already that time of the year... *The Spooky Season*. Will I get spooked by a jackpot or the amount of $$$ I lost. We'll find out tonight!

Can't wait to try it it's gonna be fun for sure .

Looking forward to playing this game in the Halloween eve…