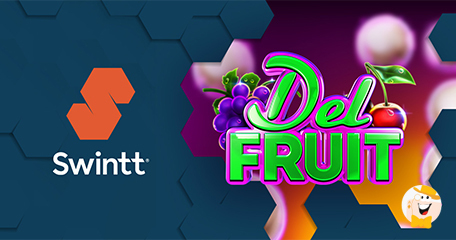 One of the expert providers of casino games, Swintt, has added another game for its users, Del Fruit. The company has recently been shortlisted for the EGR B2B Award in five categories and the new game comes right after the addition of other releases from its Premium games suite.

Del Fruit is a brand-new slot featuring five reels and five lines and takes inspiration from traditional games in brick-and-mortar casinos. The game features a fruit theme and many symbols such as lemons, oranges, and grapes as lower-paying and more valuable elements such as BARs, liberty bells, and lucky red sevens.

The low volatility spinner features two bonus modes and the maximum you can earn is a 5,000x the bet.  The first bonus mode has already been a player favorite in Swintt’s Premium games and you can trigger it by hitting three or more Book scatters. They also work as wilds to form additional winnings.

If you achieve this as part of the main game, you will be taken to a new screen where the animation starts. Players will see an open book and its pages will turn over to unveil a Lucky Symbol. If you trigger the lucky symbol on the reels, they will expand to cover the reels and increase the winning potential of the slot.

As soon as a Lucky Symbol is chosen, players will be awarded 10 Bonus Spins,  with one further bonus game added each time a new scatter lands. If a Lucky Symbol extension occurs, wins will be counted from left to right on all paylines regardless of expanding symbols and their appearance on the neighboring reels.

What Else is Included

The newest release from Swintt also has a secondary bonus mode delivering multipliers and incredible payouts. It is triggered each time three or more pearl elements appear on the reels. At that moment, a new mini-game will start and users will begin with three respins.

When the feature is triggered, the pearl symbols will be locked in place and the reels will spin. Each time the next pearl lands, it will also stay on the reels as the re-spin counter is returned to 3. The feature will be finished when all re-spins are used or when pearls fill the reels.

“With their iconic graphics and casino-style gameplay, Swintt Premium Games have proved incredibly popular with slot fans all around the world.

Definitely will give it a try as I enjoy quite a few games from their portfolio!

Swintt seems to have done an excellent job again! It's an interesting gameplay experience all around!

Del Fruit looks like a good game to start the week. The guys from Swintt have done an excellent job!

This graphics... Swintt never disappoints their players when it comes to games!

I like the look of the game, and I can totally see that this will be appealing to players.

This game looks stunning and players will enjoy its premium symbols…