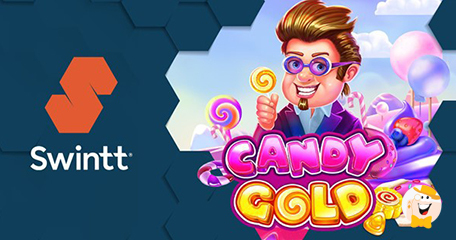 Rising Star is Back with First Cluster Pays Title

As the rising star of casino software development continues to popularize its innovative portfolio with new ideas and cluster pays mechanics, Swintt’s next great hit emerges right at the beginning of Summer to help players score big with an arsenal of sweet candy booster features in an enticing and last June release – Candy Gold!

Players can once again expect an inventive theme and innovative approach to game mechanics, as Swintt easily pushes the boundaries of gaming creation and makes another wildly ambitious title to bedazzle its loyal audience!

As announced by the developer, this is the first game in the Swintt Select franchise to feature cluster pays. Unlike some previous releases with conventional paylines, Candy Gold is entirely based on clusters where players must show their skills across a gigantic 7x7 layout.

Such configuration creates plenty of winning potential from any spin, and when you add cascading symbols to the story, Candy Gold reaches a whole new level of rewarding, reveals the studio.

The cluster mechanics in this title from Swintt work in the same usual way, basically.

Each time a winning cluster is paid, it disappears from the game board to allow new symbols to drop down and fill their place. Furthermore, if new symbols create additional clusters, their winnings are added to the current payout and the process continues until no new wins are present.

Meanwhile, in order to crush even more sweet treats, players can use one of six Candy Boosters. They come in the form of special power-ups that can be awarded at random but you must have enough spins first to fill the Candy Booster meter. In some jurisdictions, it is possible to purchase them directly by using the “Buy Booster” feature.

Among other available options in Candy Gold are also Super Candy Gold and Mega Candy Gold power-ups, capable of adding random clusters of one, four or nine wilds to the board. If they form a line-up of bombs and rockets all existing symbols will be transformed into higher paying ones.

On top of that, the Candy Bomb can turn a nine-symbol cluster into one random high-paying symbol, while the Ultra Bomb does the same but for an entire column.

In addition to the above mentioned boosters, you will also need to look out for Candy Gold’s regular wild symbols, as they can appear during any base game spin and substitute for any regular candy symbol to create winning clusters!

One of the most important highights in Candy Gold occurs when the game’s honorary spins are triggered. During this stage, players may notice a new multiplier meter and it always starts at 2x.

However, the multiplier value increases after every successive cascading win up to a maximum of 8x but it also resets when no new clusters are created. If you manage to crank the meter up to the max, you could potentially walk away with a sweet tooth and jaw-dropping wins of up 7,000x the bet.

Swintt’s first game in the Select line-up to utilize a cluster pays mechanic and cascading wins is available at all partner casinos.

See the preview before signing in here:

Cluster slots are much more interesting and dynamic than regular slots. Swintt did a great job.