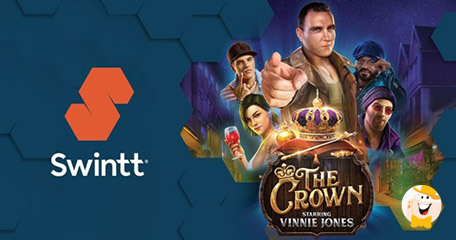 One of the fastest-growing content suppliers in the iGaming industry, Swintt announces another action-filled addition to its rapidly growing portfolio of online casino games- The Crown. Though its simple name doesn’t reveal much, the game is set to blow players’ minds as it incorporates an excellent set of features, a max win of 12,000x, and powerful visuals.

Speaking of visuals, the central character of this story is no other than Vinnie Jones a British actor, presenter, and former professional footballer. As a small reminder, the partnership with this icon most widely known for Lock, Stock, and Two Smoking Barrels was inked in December 2020.

The Wildest Set of Wilds

Featuring the former footballer-turned-actor, The Crown takes place across four exciting fictional locations throughout the UK. Those are The Crown pub, Michael’s Whiskey Tavern, The Bullseye, and The Drunken Duck, each of which offers its own unique wild icon.

“Featuring an unforgettable performance from the iconic actor, Vinnie Jones, The Crown is the first game in the Swintt catalog to include bonuses spread across multiple base game locations. With each offering a special wild with its unique perk, there are multiple ways for players to win big as they put together their crew and prepare to land the score of a century in the main Crown Caper feature.”

As for the Wilds, The Crown pub sees any wilds that appear expanding to fill their reels as a potentially lucrative re-spin is triggered. When they click on the car, punters hop over to another location, where other types of Wilds await.

Michael’s Whiskey Tavern displays sticky wilds that remain active for up to five spins, while The Bullseye boasts 4x multiplier wilds. Finally, The Drunken Duck offers random wilds that can fill the reels for gigantic wins.

Making sure the action never stops, the game incorporates The Crown Caper feature. When three or more jewel scatters symbols hit the reels from any location, this element is triggered. Punters are then taken to a new screen where they’ll get to select from four rows of cards to put together a crew and collect bonus spins with massive prize multipliers.

At the first level…

…The Crown Caper feature offers players eight bonus spins with a 3x multiplier applied to all wins. However, if their pick reveals a crew member, players will advance one row up the grid to unlock even greater rewards. At the top of the pyramid, players can earn 12 bonus spins with a 7x multiplier, but revealing a police siren at any stage will end the picking phase and start the feature.

Worth noting is that The Crown boasts the Buy Feature option as well, available for an additional wager of 75x their selected stake.

Tough Guy with a Heart of Gold

Known for tough-guy roles in movies and aggressive style of play on the field, Vinnie earned the image of a “hard man.”

Yet, one of the most amazing facts about this British actor is that he’s an avid philanthropist, which is precisely what led to a successful collaboration with Swintt. As far as planned, half of the game’s future revenue will be donated to Jones’ non-profit organization of choice – the Royal Brompton and Harefield Hospitals Charity.

Interestingly, this is not Jones’ first venture into the world of online casino gaming. He’s been working as a regular contributor to an international sports betting odds and online casino comparison site.

Something refreshing from Swintt looks good, I m interesting to try this slot.

I'm not a big fan of Swintt, but this game is amazing. Great graphics and even better features, and my favorite feature is the ability to shift locations.

With that reputation of a tough guy, Vinnie is a perfect character for a slot game.