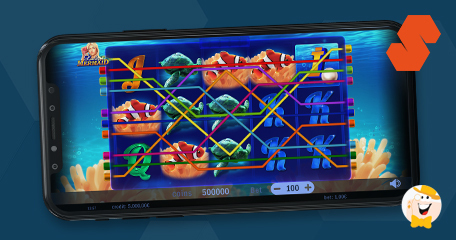 Swintt continues to establish its position as one of the leading content suppliers in the industry. The brand has just added the Lucky Mermaid experience to its suite, with massive prizes available up for grabs.

An experienced star in the gambling industry has just obtained another recognition for its achievements. Swintt has earned an award for EGR Global B2B Innovation in the Mobile industry. This month, the brand is ready for even more action with the addition of underwater experience as part of its Premium content portfolio.

If you get started with this immersive online slot you will see the main action taking place across five reels and 10 paylines. You are taken to the coral reefs on the blue seas. While playing, you will see bubbles floating up from the center of the screen as the reels spin around. At the same time, a menagerie of marine life drops into place, with elements such as fish, turtles, and the fabulous creature, Lucky Mermaid.

The Lucky Mermaid represents the wild symbol and replaces any regular base game symbol when filling the winning pay lines. However, players will also search for special MULTI elements as they spin around. As soon as one letter shows up on each column, hitting M, U, L, T, or I icon will keep it in a special bar atop the reels. When the word is completed, the Pearl Feature will be set in motion.

The latest game from Swintt also comes with a respins round. To start with, players will get three respins, but every time a pearl stops in position, it will freeze in place and the counter will return to the starting value. This will proceed until one of the following things happen– either no new pearls land and the respins are over or the reels are fully covered.

Reacting to the addition of the new game, David Mann, Chief Commercial Officer at Swintt said:

“As the latest game in our popular catalogue of Premium Slots, Lucky Mermaid invites players to dive beneath the waves to seek out sunken treasures and maximum wins of up to 3,026 x their bet.

According to his words, like other titles in their Premium collection, Lucky Mermaid blends the familiar graphics and pick-up-and-play model of classic land-based slots with brand-new bonus rounds like the Pearl Feature. It is easily triggerable thanks to the latest MULTI symbol collection mechanic. He believes that this rewarding addition will seriously boost players’ wins and raise the game’s maximum RTP to a 95.05%

“The brand has just added the Lucky Mermaid”

So far not a big fan of this Swintt software at least the one game I have played.

What an exciting release from the company. Looking forward to joining this slot and getting the maximum of its potential…