Testing BTC-Optimized Rocketpot Casino - Is It a Must-Visit Spaceship for Serious Players? 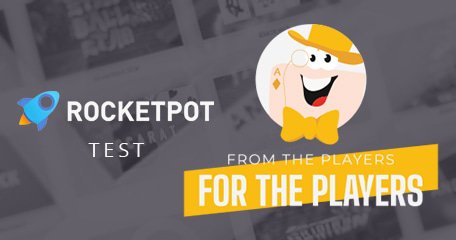 LCB team is back with another comprehensive report, this time bringing tons of first-hand insights from a crypto-friendly online casino. As a part of the ongoing project “From the Players, For the Players”, we decided to put Rocketpot Casino under the microscope and see if it ticks all the right boxes.

For this particular investigation, our tester MarijaS paid a visit to this Curacao-licensed betting outlet, registered, and played a multiverse of games. She eventually requested a cashout without submitting any document to verify her identity.

Was it a bad decision?

Before we proceed, allow us to share a couple of highlights with you:

Things seem quite fine on the surface, don’t they? If you want to find out what REALLY happened during our tester’s investigation, stay with us and keep reading!

Greenlighted by Curacao regulator, Rocketpot casino is a non-US-friendly and crypto-only online casino. Cooperating with an impressive number of studios, among which Booming Games, Wazdan, Habanero, iSoftBet, Quickspin, Microgaming, and more, the operator has a highly-diversified portfolio of slots, Blackjack, Roulette, Baccarat along with sports and race. 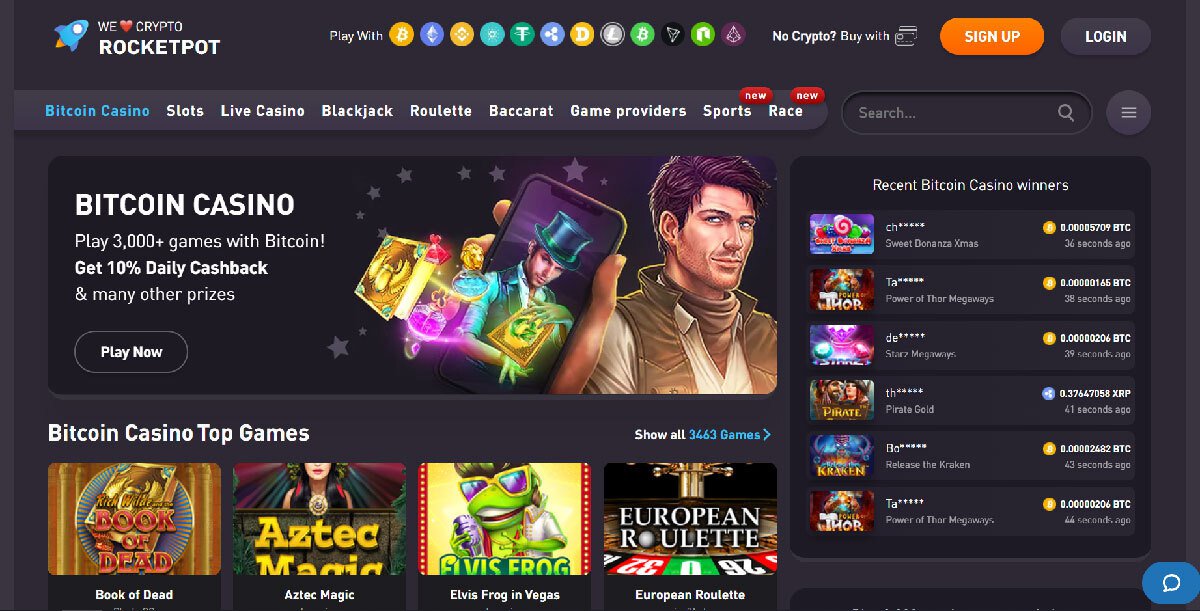 Optimized to perform well on Android and iOS devices, the venue ensures the finest experience on the go. On top of a humongous content catalog, the establishment offers a fine selection of promotional campaigns, with notably high wagering requirements though. Players have the opportunity to advance through levels and unlock chests with valuable prizes.

Without further ado, let's get down to the details of the investigation!

On November 17, 2021, our tester visited Rocketpot Casino intending to join the platform. Simplified maximally, the registration procedure requires nothing more than an e-mail address, username, date of birth, and password. The last field is optional and it represents a referral code, in case a punter has one. 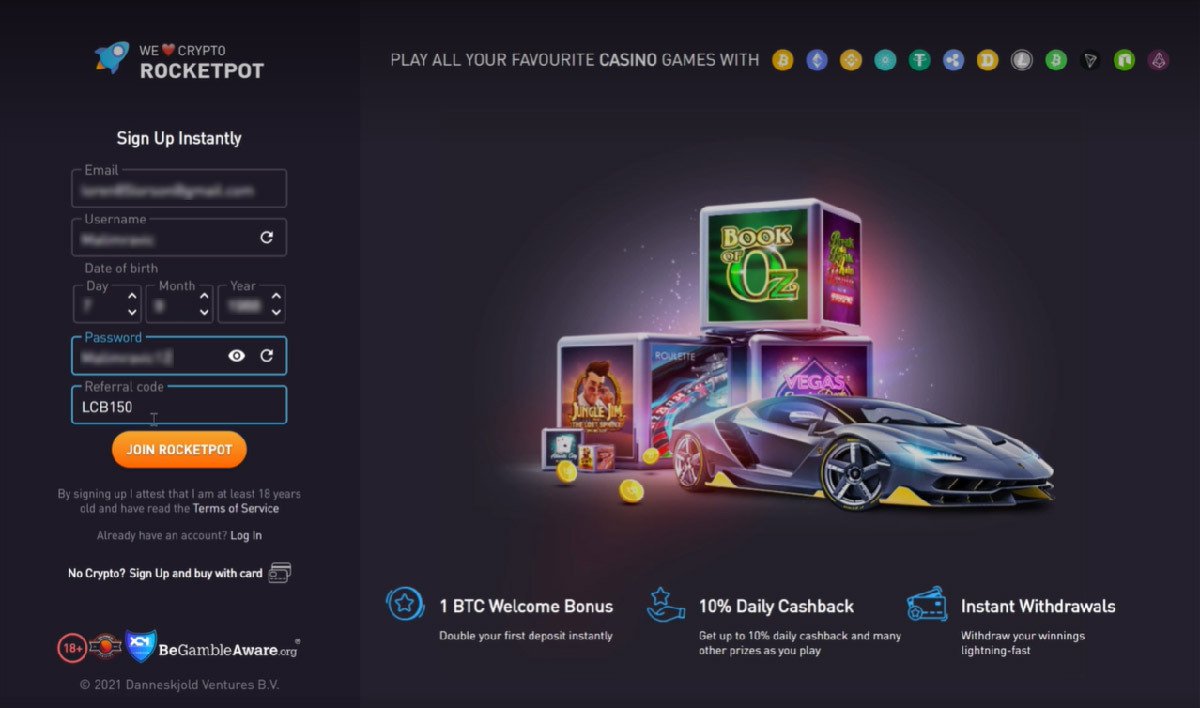 Once a registered member, a player should pay attention to the activity. Accounts with 3 consecutive months of inactivity (meaning, no transaction processed) are categorized as inactive, and a fee of 15% of the balance is charged every month.

Following quick and hassle-free registration, the LCB tester decided to make a deposit on the same day, November 17, 2021. Equipped with a large spectrum of crypto payment assets, this venue allows players to deposit and withdraw in Bitcoin, Ethereum, Litecoin, Dogecoin, and a couple of other cryptocurrencies.

Our tester’s choice was Bitcoin. She sent $200/ 0.0033 BTC via Coinbase, and the transaction was processed quickly. 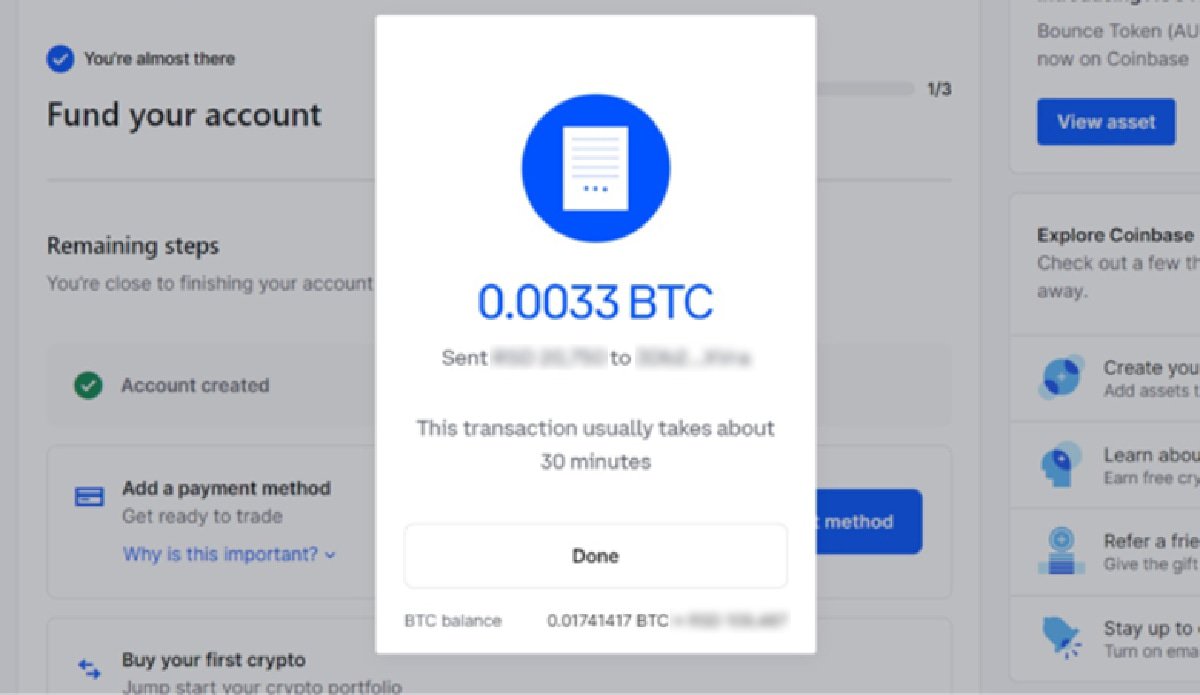 With more than 60 providers featured, Rocketpot casino is home to all sorts of games. Having completed the registration and deposit, the tester went on to explore the portfolio.

Her first gaming session took place on the same day. A couple of games she tried to initiate weren’t available in her country of residence. Some of them displayed error messages. Eventually, she managed to launch Dragon Match Megaways by iSoftBet, followed by The Great Wall from the same studio. 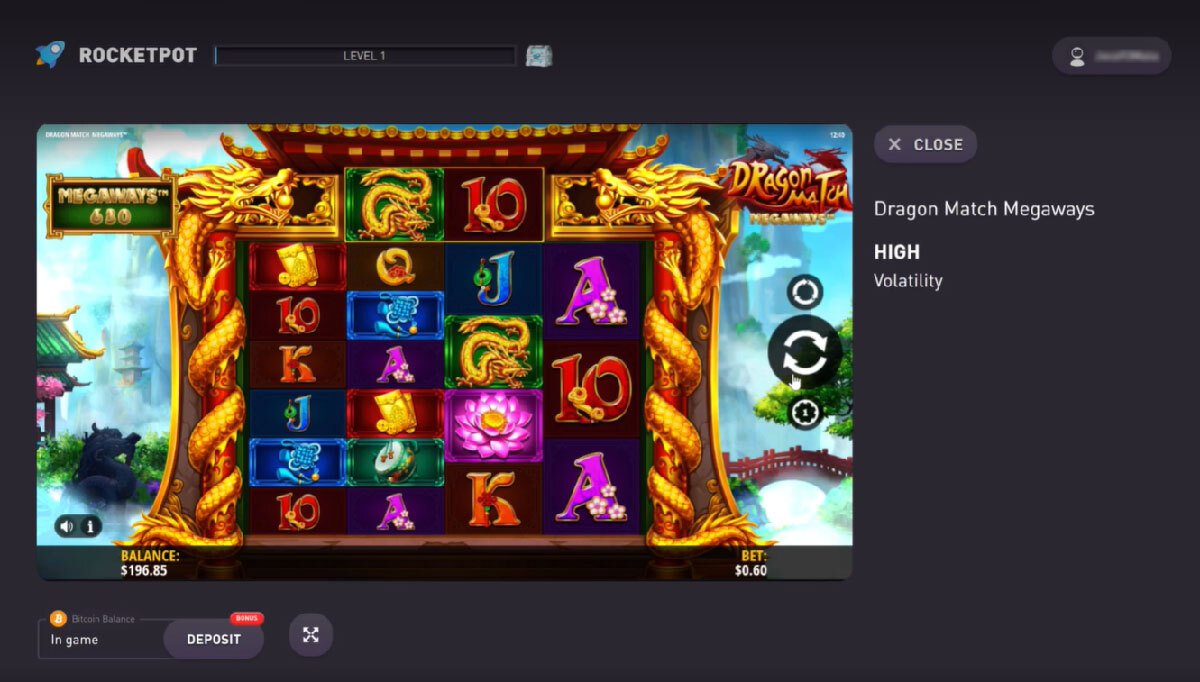 After that, she checked out Aeronauts, Talismans of Fortune, The Emperor’s Tomb, and Elven Princesses, all delivered by Evoplay Entertainment. Worth adding is that there were occasional freezes and longer loading times.

Later on, LCB tester returned to The Emperor’s Tomb , after which she launched Chinese New Year. Then she had a couple of spins on Atlantis, and Wild Bullets. Her next choice was Temple of Dead Bonus Buy and Christmas Party, with quite an extraordinary grid structure. The next in line was Book of Rest, followed by Talismans of Fortune and The Emperor’s Tomb. 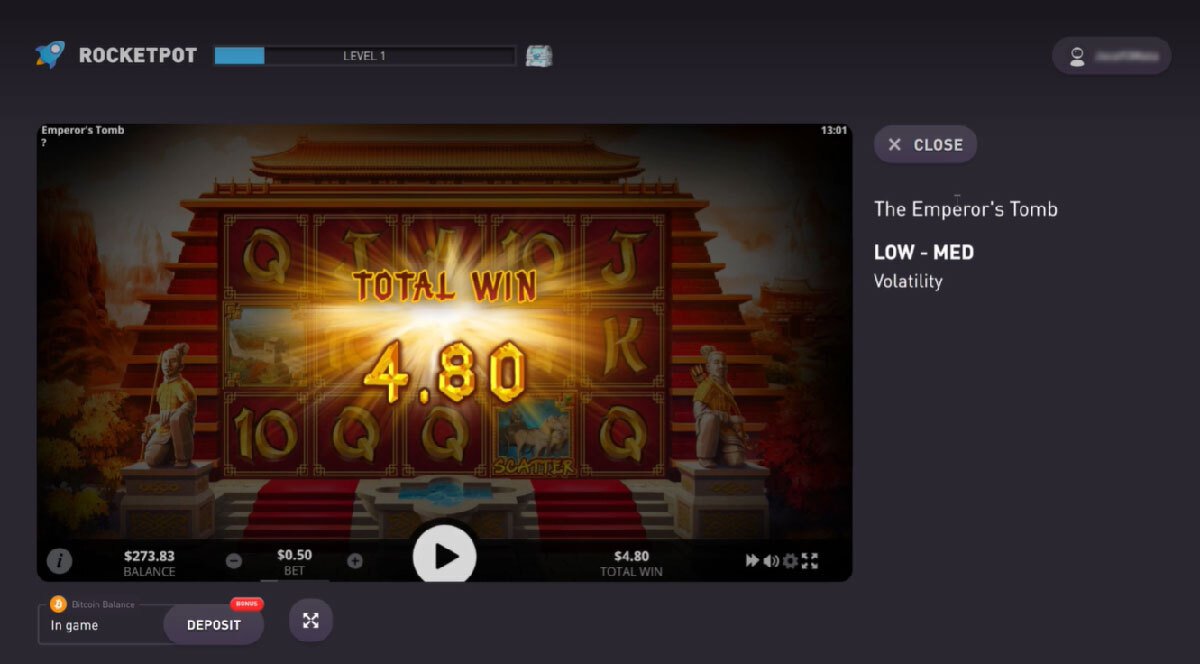 Having explored multiple titles by Evoplay, the tester accessed Boongo’s releases, wanting to play Wild 888 and Beast Saga. After that, she checked out Raging Reindeer by iSoftBet and Western Gold Megaways developed by the same supplier. She concluded the gaming session with Talismans of Fortune.

A day later, on November 18, 2021, the tester accessed Rocketpot again, wanting to check out other adventures featured in the catalog.

The Emperor’s Tomb was the first game she activated, followed by Vikings Go Berzerk, Champions of Rome, and Time Travel Tigers, all by Yggdrasil. Tigers brought her a Super Mega Win of $173, from a $0.50 spin. 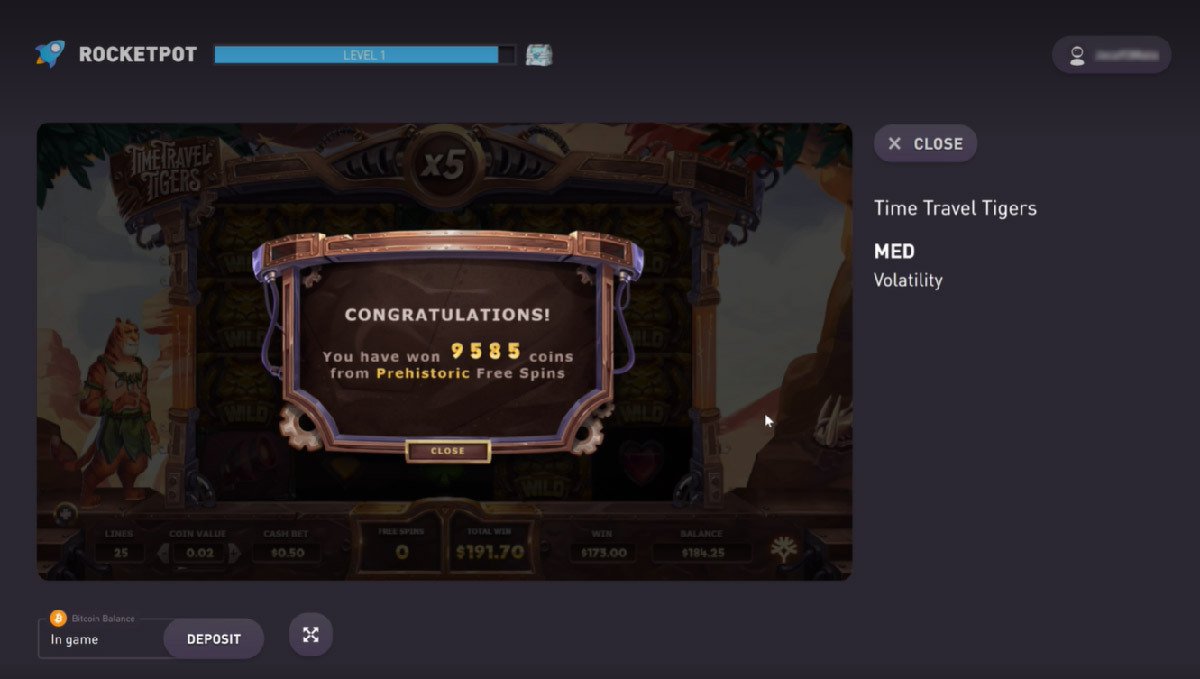 Having delved into a wide variety of slots, the tester filled the meter displayed in the upper left part of the page and unlocked a level 1 chest. She won $5 and the cashback percentage changed to 1%. 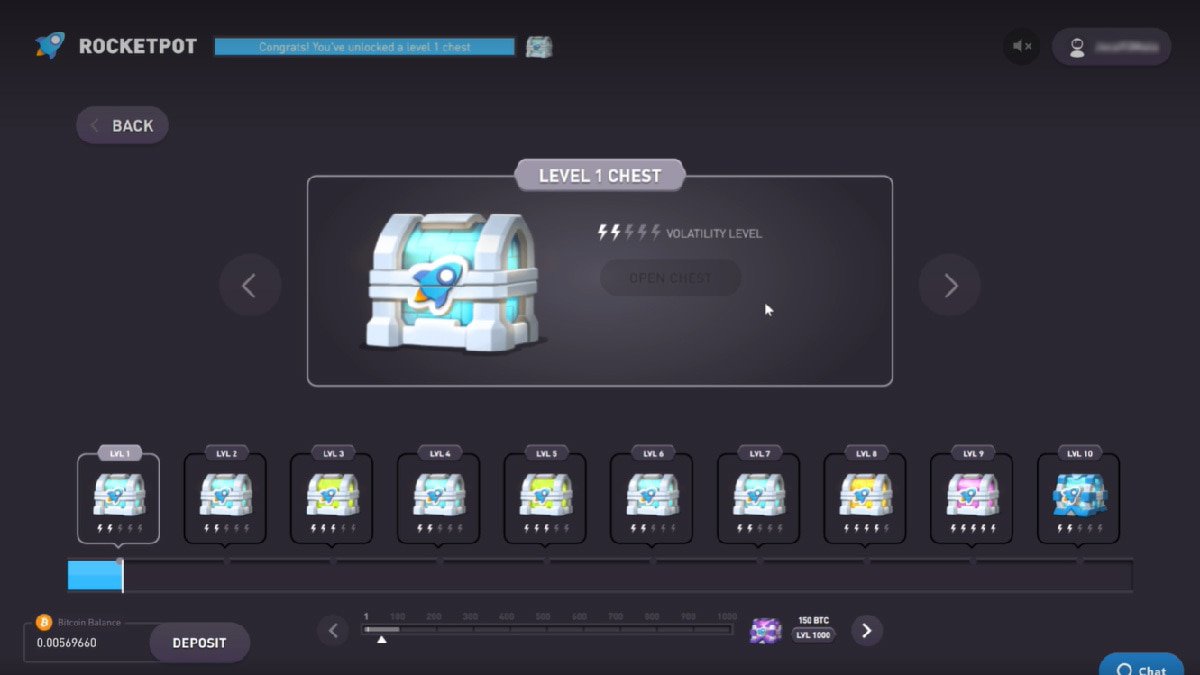 She decided to immerse into Champions of Rome once again, and then explored Jungle Books developed by Yggdrasil. After that, the tester launched Time Travel Tigers once again and had a noteworthy win of $111. 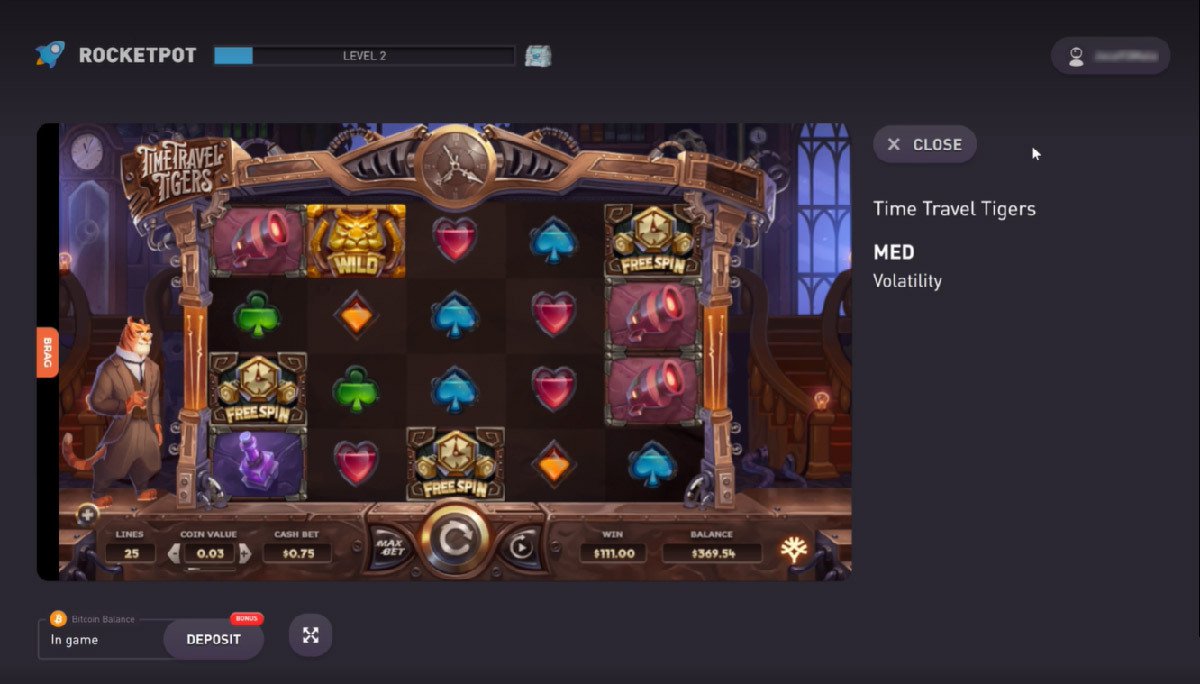 Furthermore, the tester ventured into Cazino Zeppelin, Troll’s Bridge, followed by Hades. She also returned to Time Travel Tigers a couple of times.

Later on, she tried luck once again with Talismans of Fortune, Vikings Go Berzerk, and Time Travel Tigers. While playing the last-mentioned game, the tester experienced minor technical issues, and her play was interrupted.

The next day, on November 19, 2021, the tester logged into her account and accessed to lobby to explore a couple of more titles. Her first choice was the most rewarding adventure from the previous day- Time Travel Tigers followed by Vikings Go Berzerk. 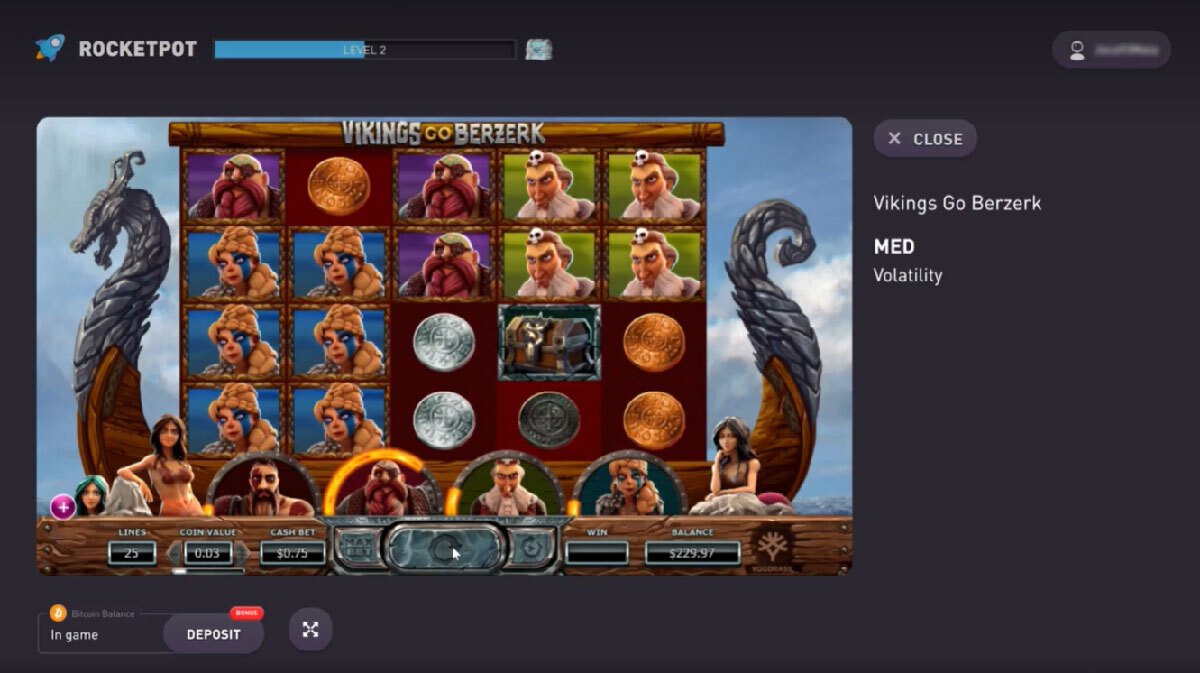 She tried to launch a couple of Microgaming releases but wasn’t able to, again, due to some technical errors. The tester switched to another provider displayed in the lobby, and ventured into The Great Wall, The Fortune Pig, and Imperial Wealth, all by iSoftBet. 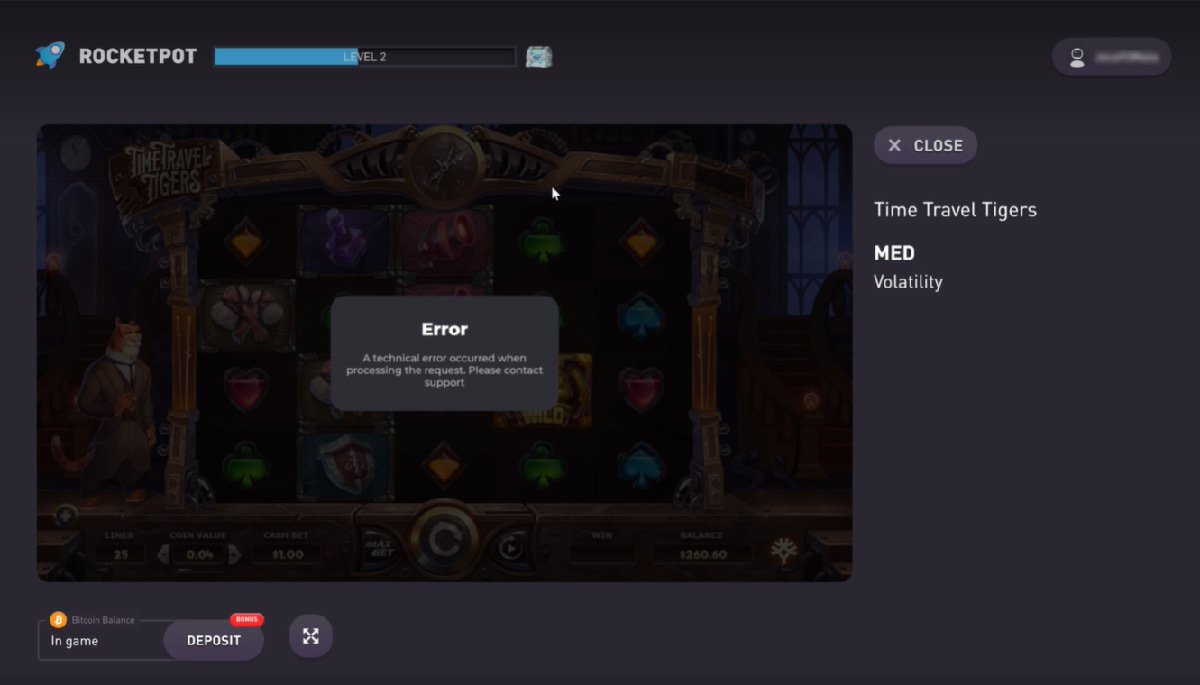 Once again, the tester accessed Evoplay corner to initiate Talismans of Fortune and Atlantis. Her next choice was Clash of Pirates, Hungry Night, The Bomb Squad, Indiana’s Quest, and Elven Princesses, a couple of more games coming from this inventive producer. 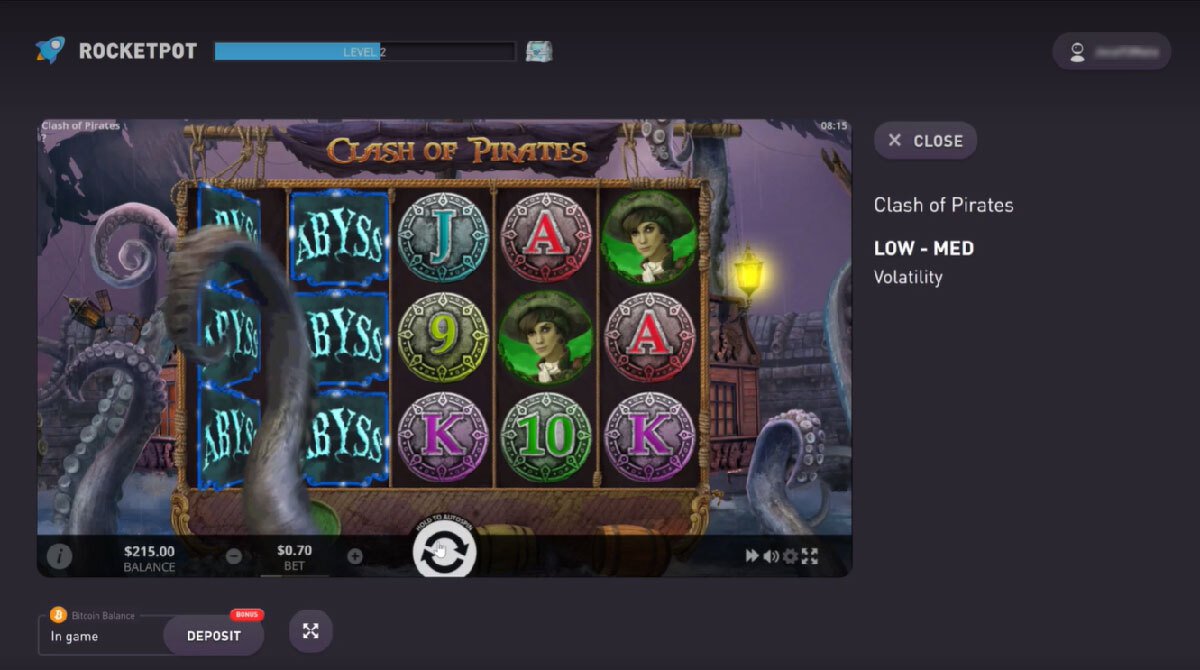 Having explored this studio, she wanted to check out one of Betsoft’s most popular slots- Quest to the West but quickly switched to Time Travel Tigers and Champions of Rome. After that, she launched The Emperor’s Tomb.

Eager to mix things up a bit, she decided to put her skills to the test, and venture into European Blackjack by Betsoft. While playing this game, she spotted a notification that the level 2 chest is unlocked. However, she did not open this one. 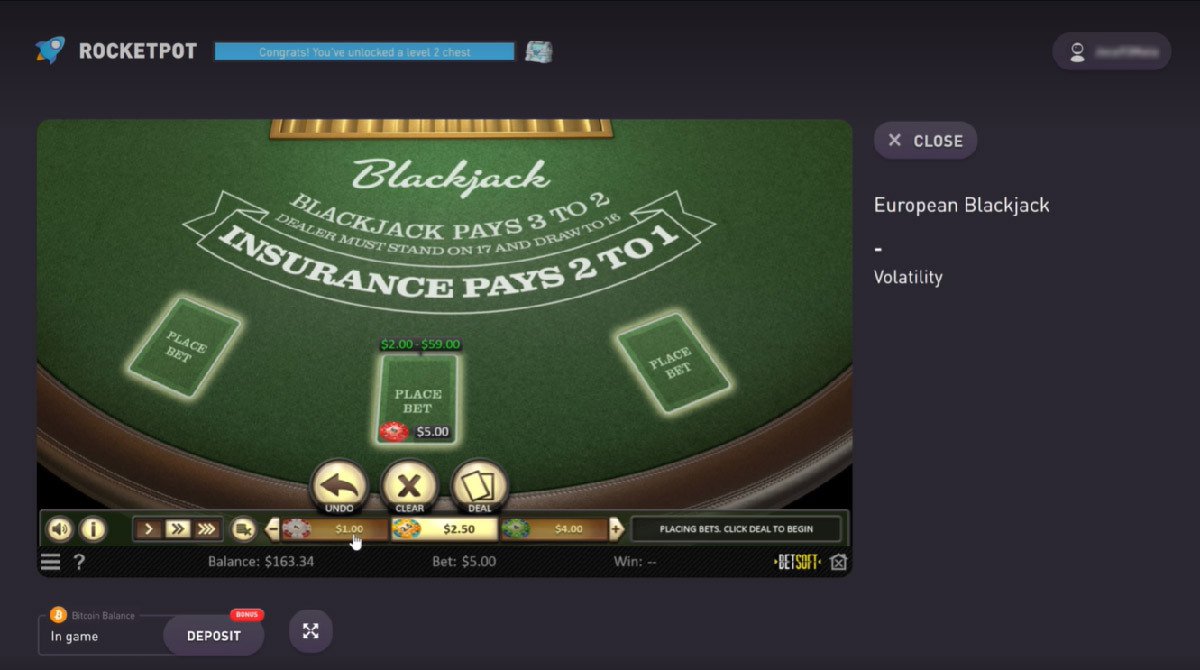 Instead, she continued traveling through the lobby by activating some of the slot releases she had previously played.

It took less than ten minutes from the moment she made a cashout request to the moment money arrived on her account, marking the end of our tester’s journey through this crypto-friendly venue. 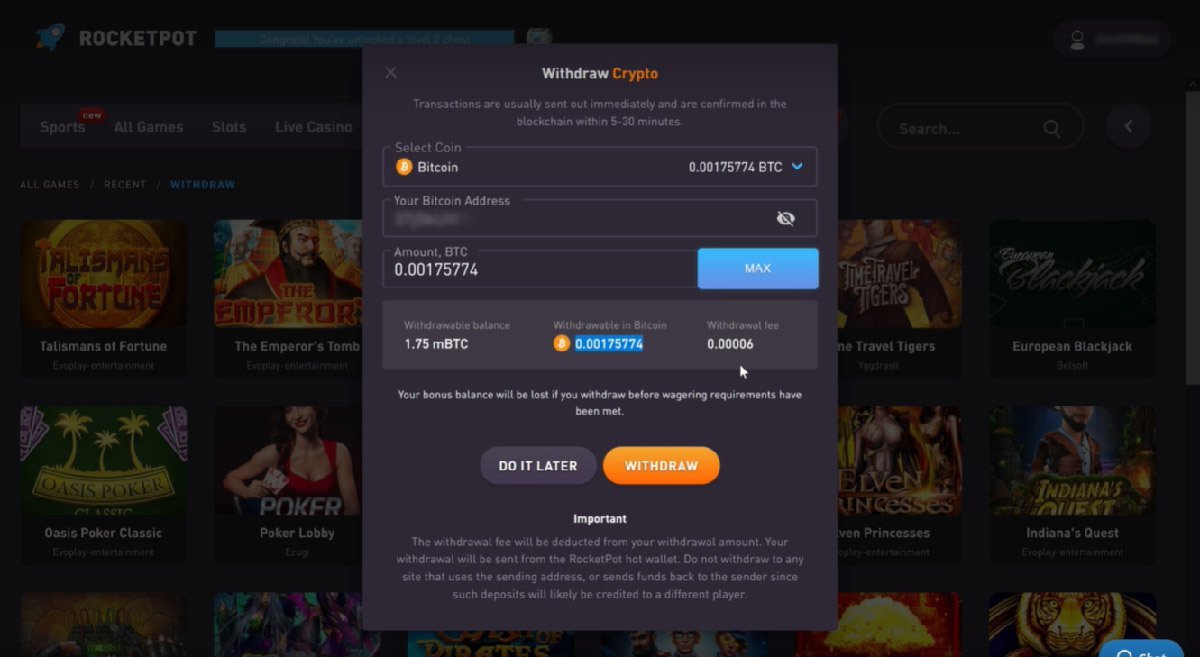 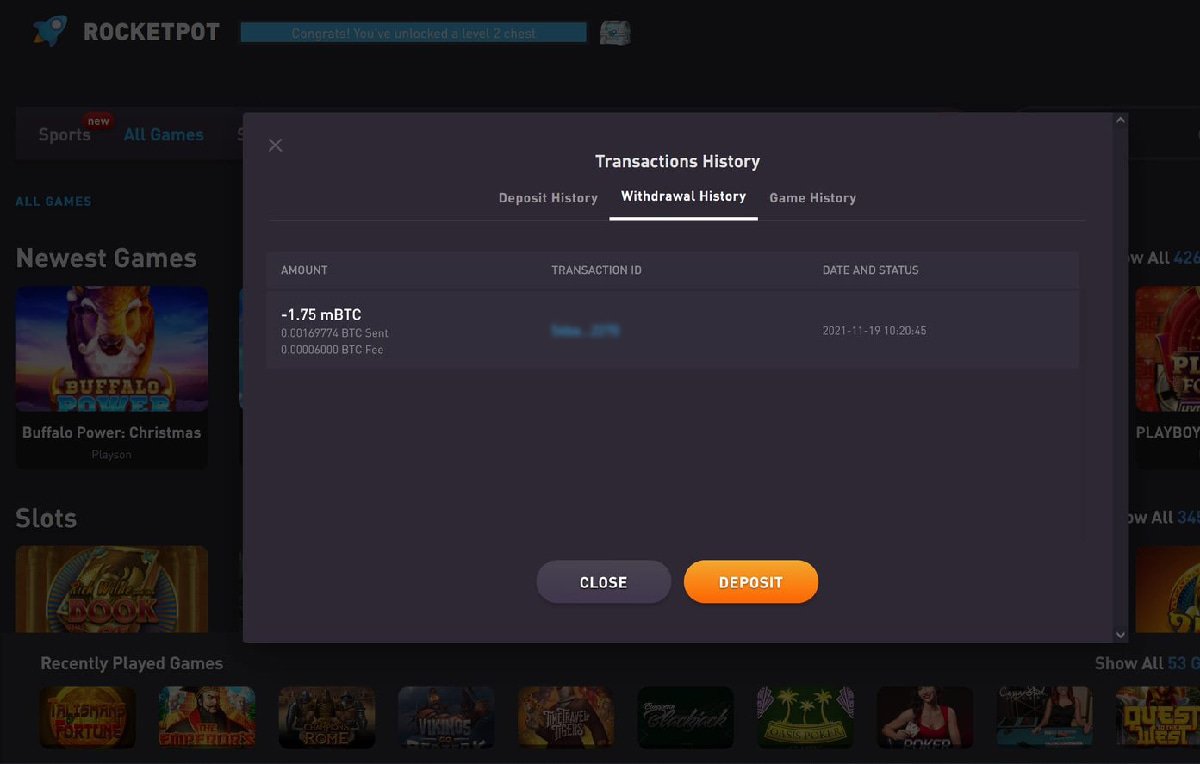 It’s important to stress out that withdrawals can be requested only in the same currency as used for the deposit. Options are the same- Bitcoin, Bitcoin Cash, Litecoin, Ethereum, Dogecoin, Binance, Cardano, Tether, Ripple, Tron, and NEO. As hinted above, there’s a mandatory withdrawal fee set at 0.0006 (BTC, NEO, BCH, LTC, DOGE, ETH, BTC).

“11.2. You can only withdraw once you have wagered three (3) times the deposited amount.

11.3. Rocketpot.io will process all requests within 24 hours.

Even though the Terms indicate that the operator may implement ID verification procedures even before making a deposit or requesting a cashout, our tester wasn’t required to complete any. As per Terms, KYC may be demanded in case the withdrawal exceeds a $2,000 threshold.

Except for those technical issues, the tester encountered no other problems with Rocketpot Casino. Both transactions were approved quickly, without any delays or KYC requirements.

If you want to take a look at other reports from this tester, take time to read the following:

We hope that our tester’s investigation has brought you tons of valuable information, and helped you decide whether to register in this casino or not. Don’t hesitate to let us know what you think about the tester’s experience with Rocketpot Casino in the comments section below.

“without any delays or KYC requirements”

All in all, not bad experience. Except for the high wagering requirement - huge downside! Thanks for the another detailed report!

Really this casino testing is a great project, players get first-hand information. Rocketpot Casino has proven to be solid, maybe a little 3x wagering requirement is too high.

I like the casinos with fast payouts, but 3x wagering for the straight deposit, repeated technical errors and 15% fee due to no transactions processed for 3 months is bad business practice.

These reports are so helpful, it's up to us whether we should play or not with all details provided. The big advantage is that the withdrawal got processed in less than 10 minutes, I like payouts processed as quickly as possible. :)

Yes all went well but 3x wagering for straight deposit and a fee for withdrawal ... too much for me!

Thanks for another great report.

Great job MarijaS and LCB! They should work on solving technical problems anyway, but I'm glad to hear that everything else went smoothly without any obstacles!