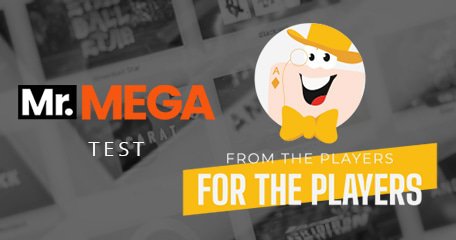 Doing its finest to bring as many genuine experiences with various online casinos as possible, the LCB team presents another insightful test report. This time, one newer addition to our directory was put under scrutiny - MrMega casino.

For this particular test conducted as a part of our “From the players, for the players” project, R0UNDER had to put on his detective hat. The tester registered, went through the registration and ID verification, played a couple of games, and successfully withdrew EUR 50 via MuchBetter.

Before we describe the full process, from registration to cashout, take a look at these crucial moments of the investigation:

What follows is a complete test report- from quick deposit to successful withdrawal using MuchBetter, so stay with us and keep reading!

MrMega casino is a brand powered and operated by Aspire Global LTD and licensed by Malta Gaming Authority and Gambling Commission of Great Britain. It is equipped with content from more than 50 popular content developers and features all sorts of casino games.

An important thing to stress out here is that…

…our tester comes from Germany, which has undergone some significant regulatory changes in 2020, and will become effective starting July 15, 2021. From October 15, players from Germany are allowed to play slot games only, so even though this hub offers other categories of games as well, the tester has access to one-armed bandits only.

Our tester’s journey began on April 14, 2021, when he registered in MrMega Casino. There are two steps to go through- create a username and password is the first one, and leaving some personal data is another. 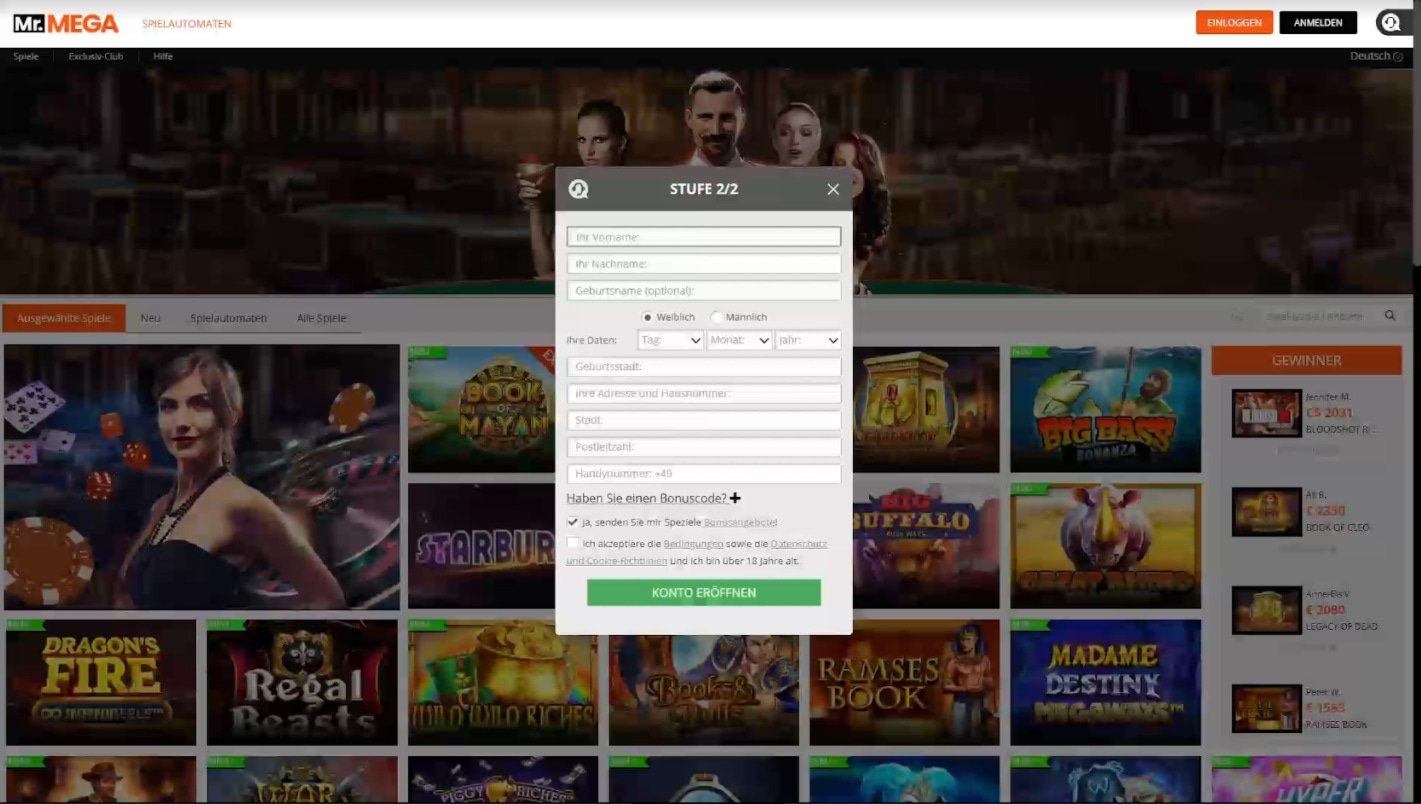 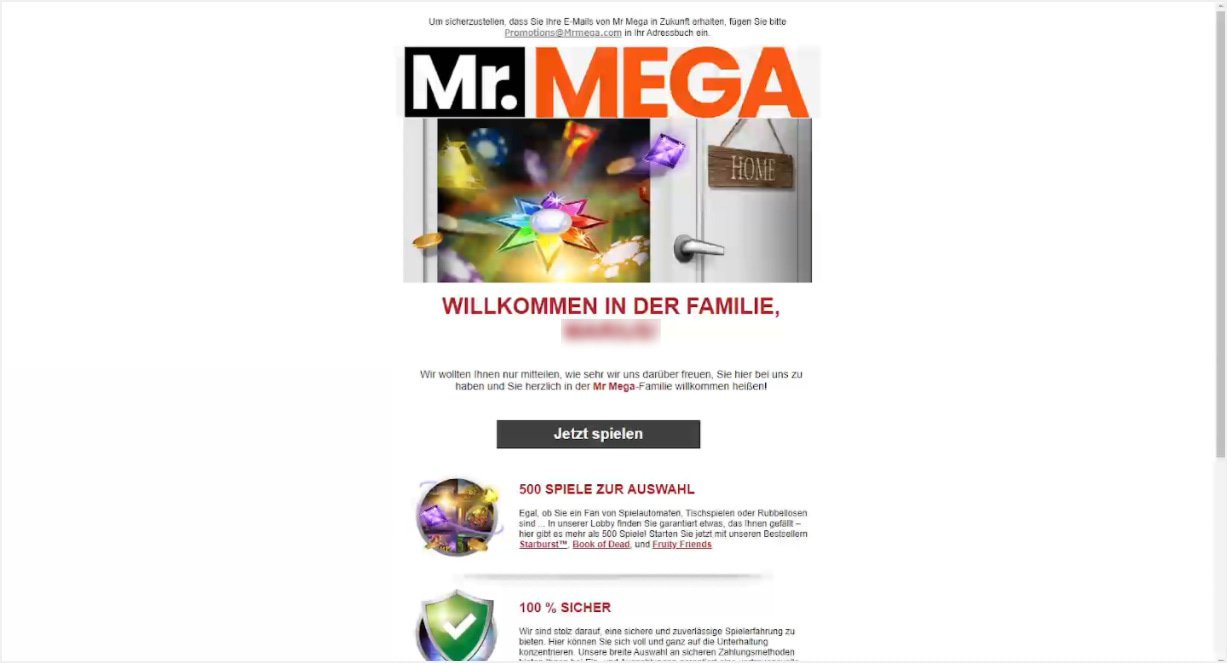 Following the registration, the tester proceeded to the next step - ID verification. He accessed the “Account Details”, and then clicked on the “Upload your documents” button.

To confirm the identity, one can upload up to 6 documents. In our tester’s case, those were his ID card (front and back), the most recent bank statement, and a confirmation of his MuchBetter account. 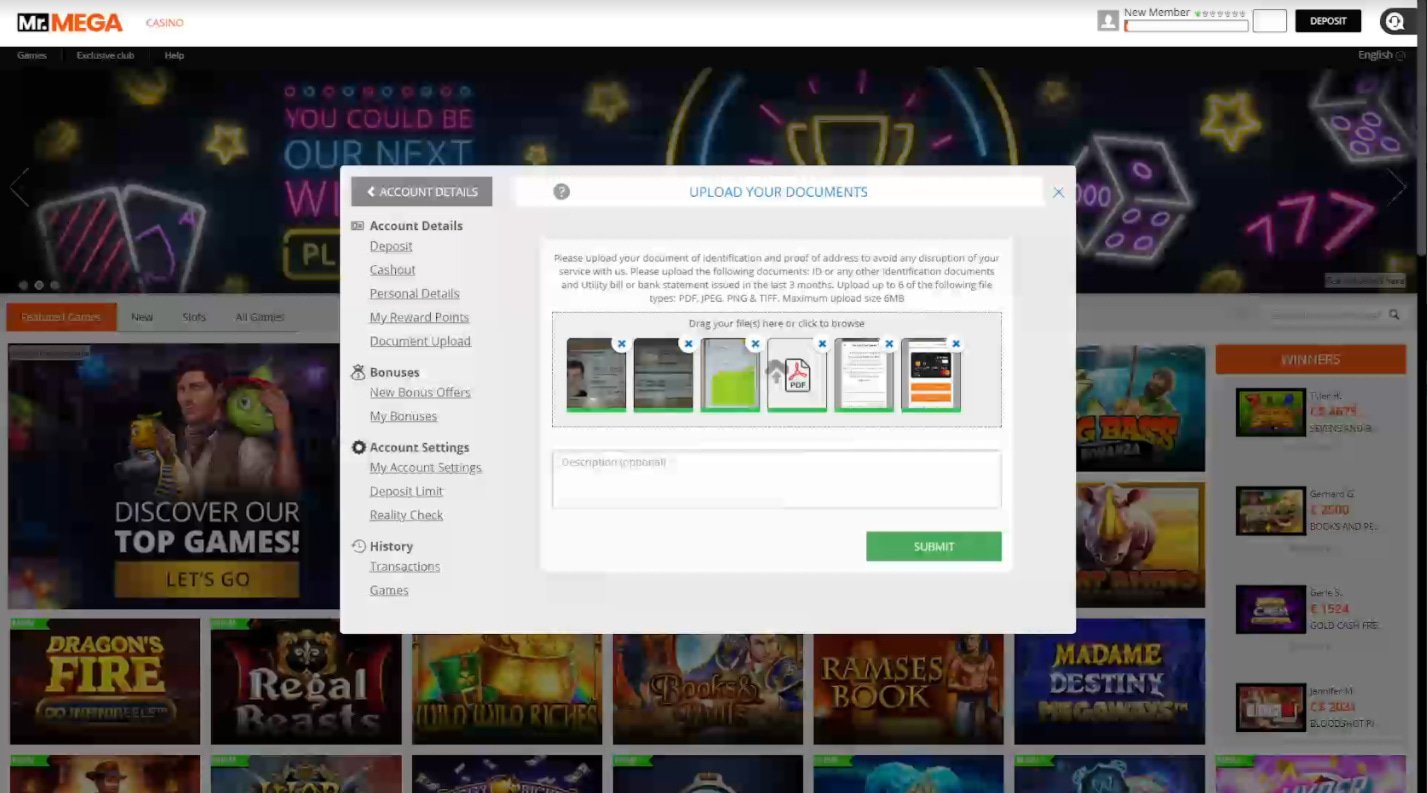 He received the notification that the upload was successful, but no e-mail or any other message that the documents were approved. There’s no option to check the status of the account either.

Were There Any Obstacles While Depositing?

Having successfully uploaded his documents, the tester decided to make a deposit on the same day, April 14. He clicked on the “Deposit” button, selected MuchBetter, and entered the amount of EUR 170. Worth stressing out is that below the sum, there’s an option to enter a promo code, in case a punter has any. As our tester didn’t have any, he just pressed “Continue”. 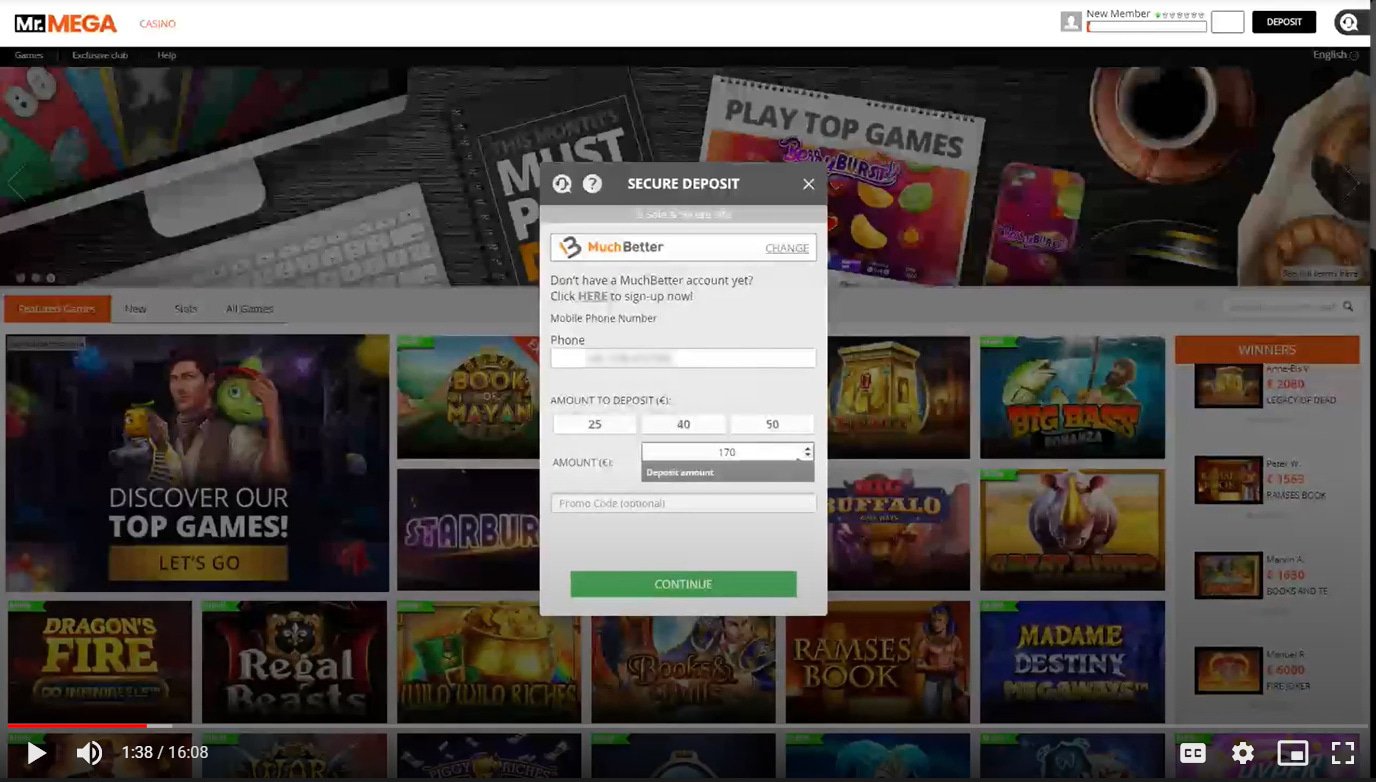 After this, a notification arrived, informing the tester that he should log into his MuchBetter account and confirm his deposit. As this was conducted automatically, shortly after a notification arrived that his account us replenished. His balance was EUR 340, which was twice the amount he deposited. 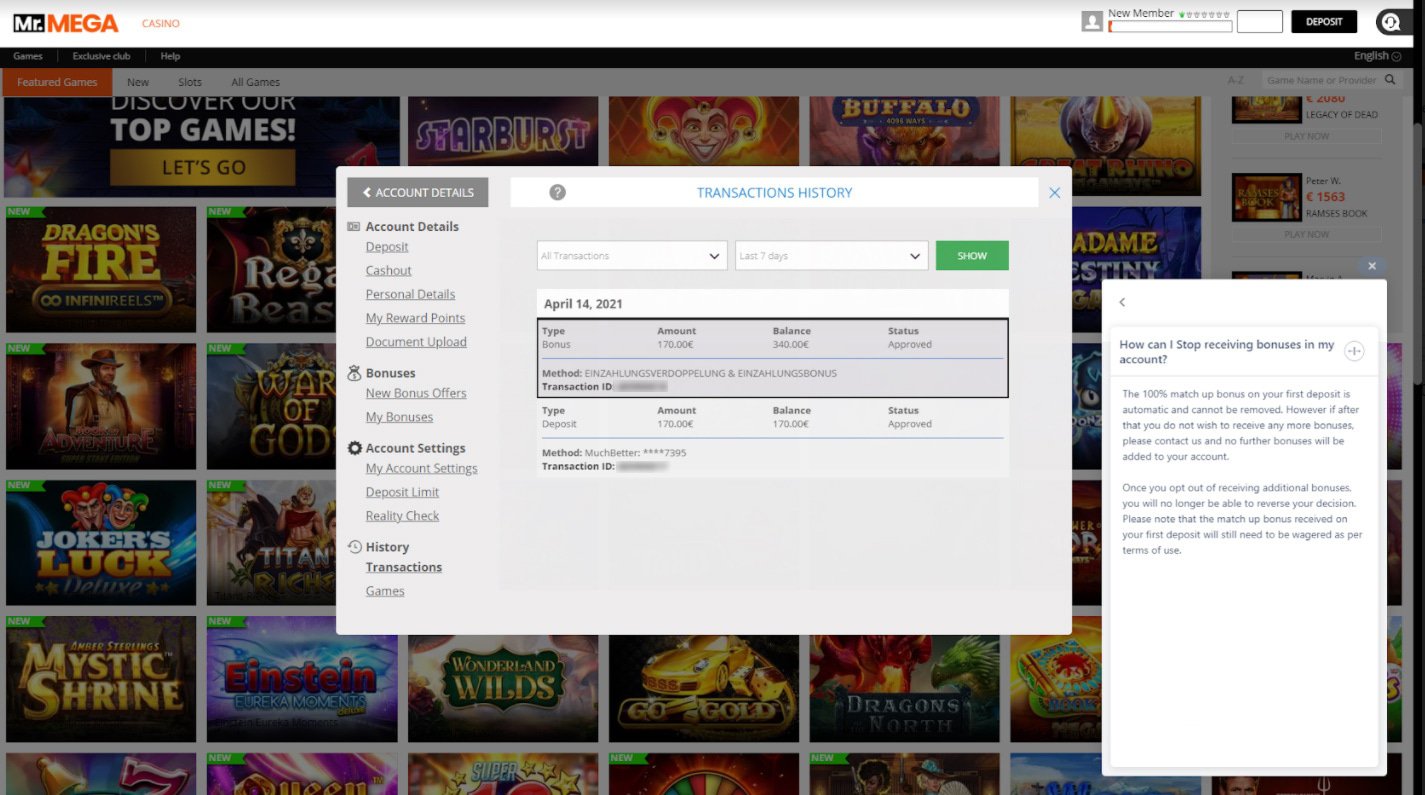 To check what was the reason his balance showed double the amount he deposited, the tester turned to live chat support. However, after an introductory greeting, he received the message that “…customer service center is closed. Support team is available from 08:00 am CET to 00:00 am CET”. He apparently contacted them before the official working hours.

As the tester wrote in the chat window, he didn’t choose any bonus when registering, but still, he ended up with a 100% match. He wanted to have it canceled, to begin playing without the promo. He sent the message, but an automatic response arrived letting him know that “…customer service center is closed.” 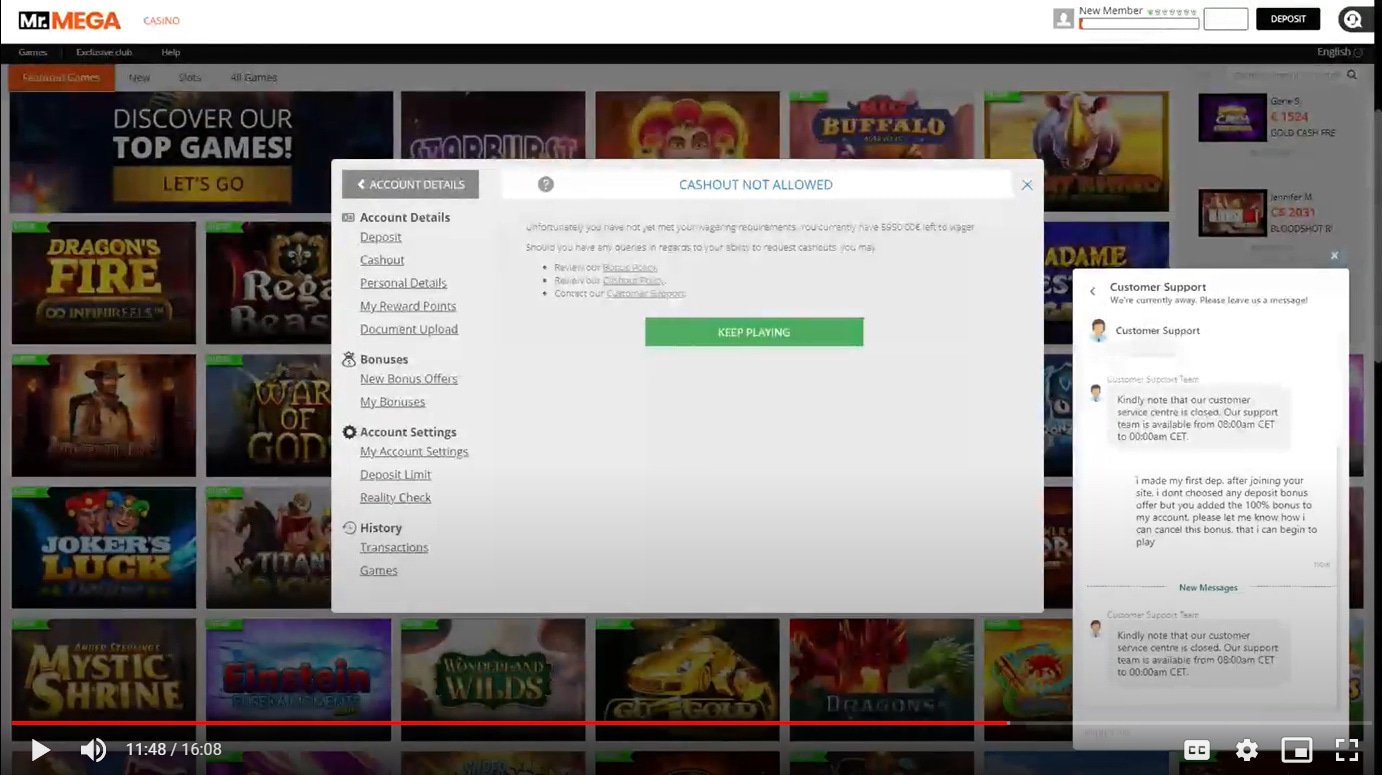 Wanting to solve this situation as soon as possible, he turned to the FAQ page, where he found the answer. The advice was to contact the venue “straight away”. 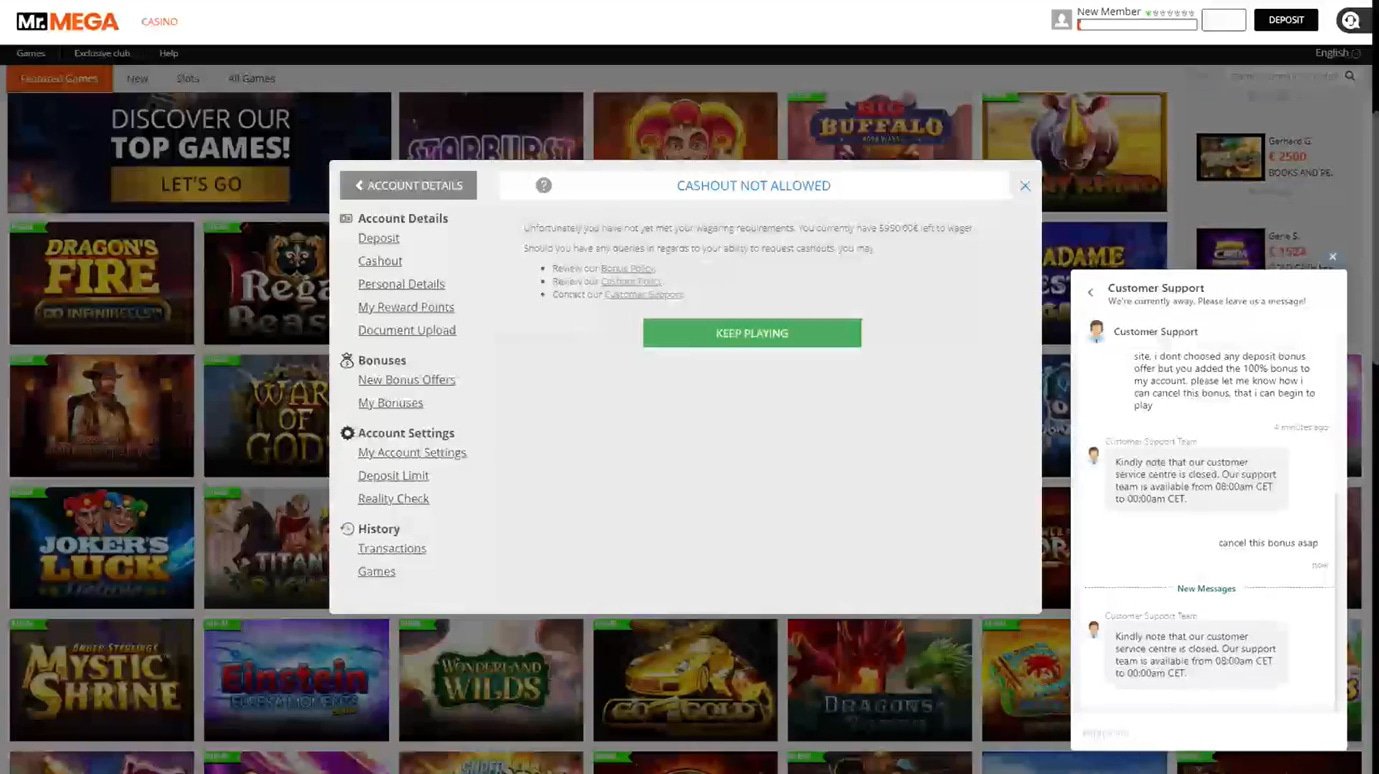 As that wasn’t possible (the service center was still closed), he explored the FAQ section a bit deeper, searching for more information. One of the answers was that the 100% match bonus on the first deposit was automatic and cannot be removed. 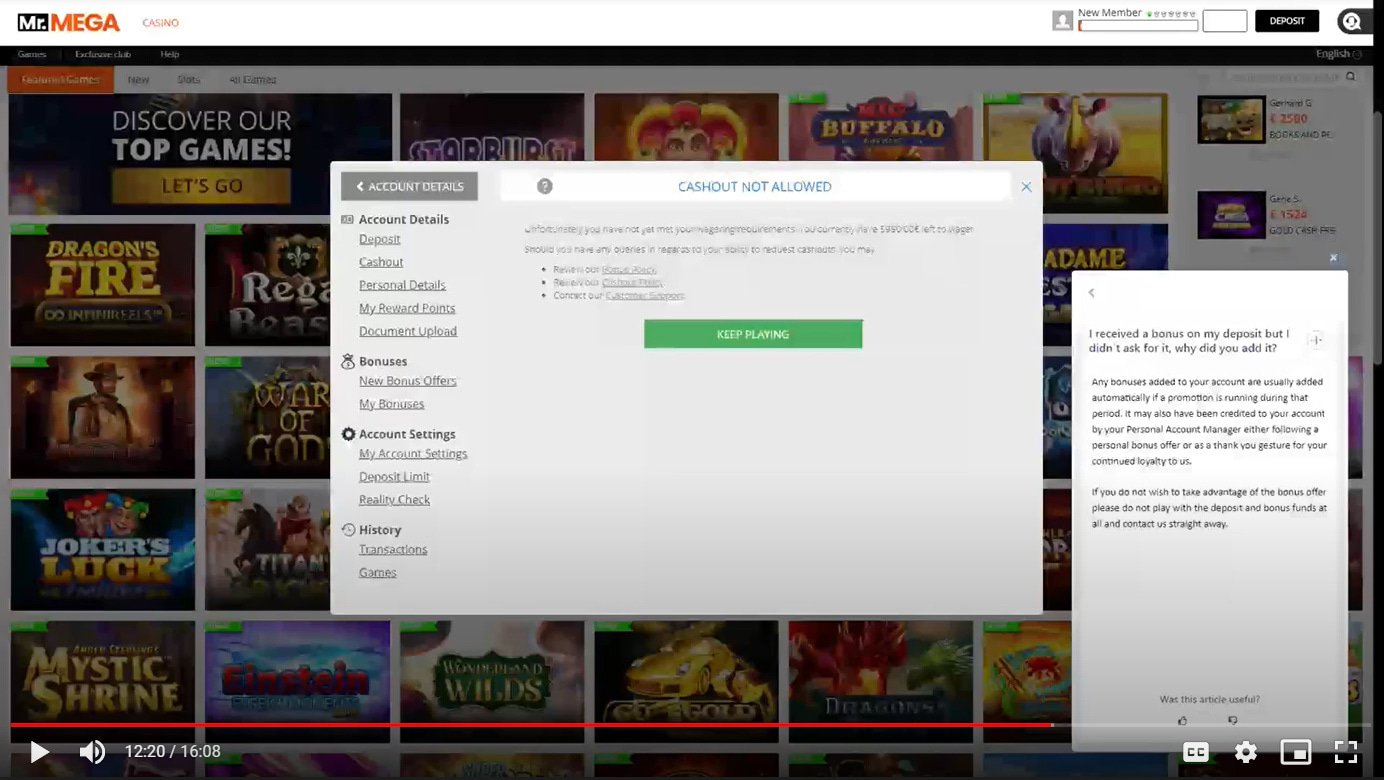 Once again, he turned to live chat telling them to “cancel this bonus asap”, but received the same automatic response. 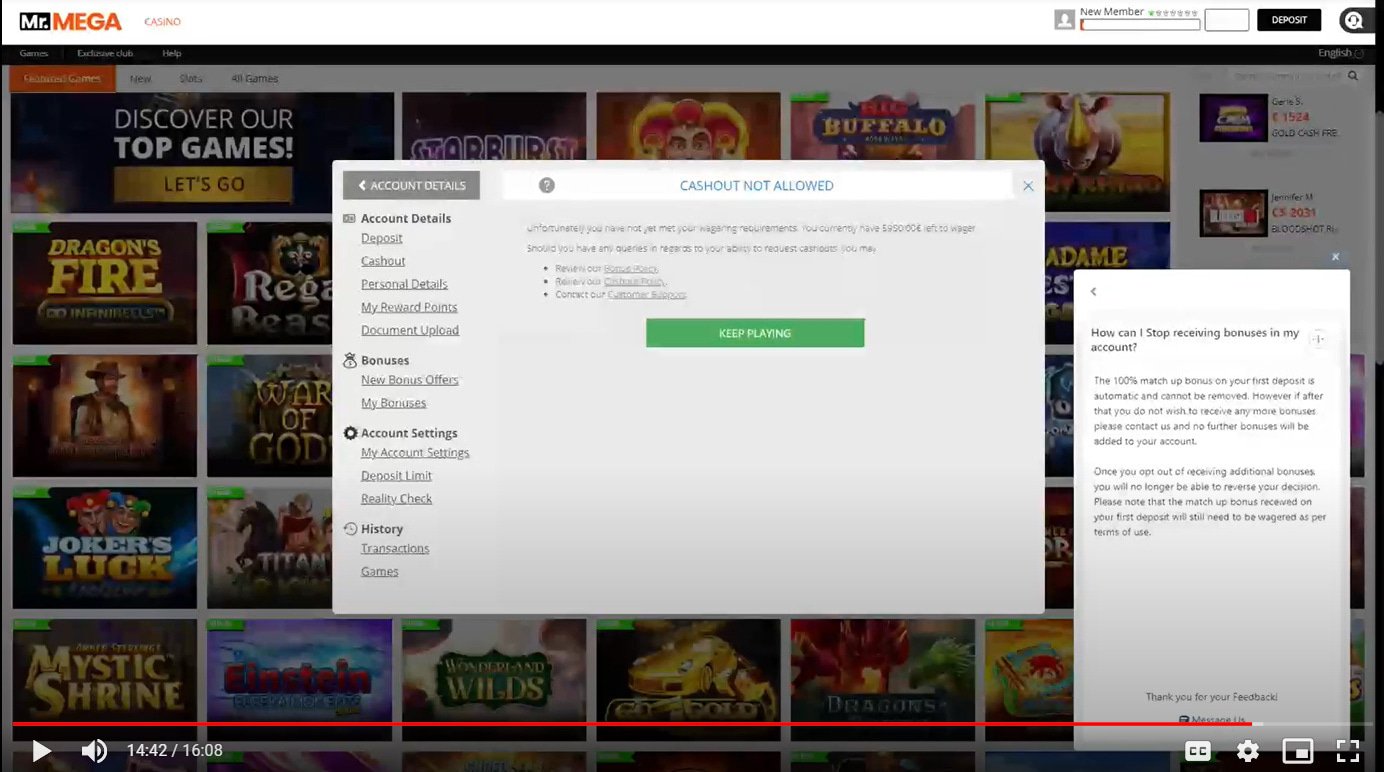 A bit later the same day, when the support department officially opened its door, the tester got in touch with them once again, to have the match bonus cancelled. The bonus was removed from his account on April 14, 2021, after 8 am. 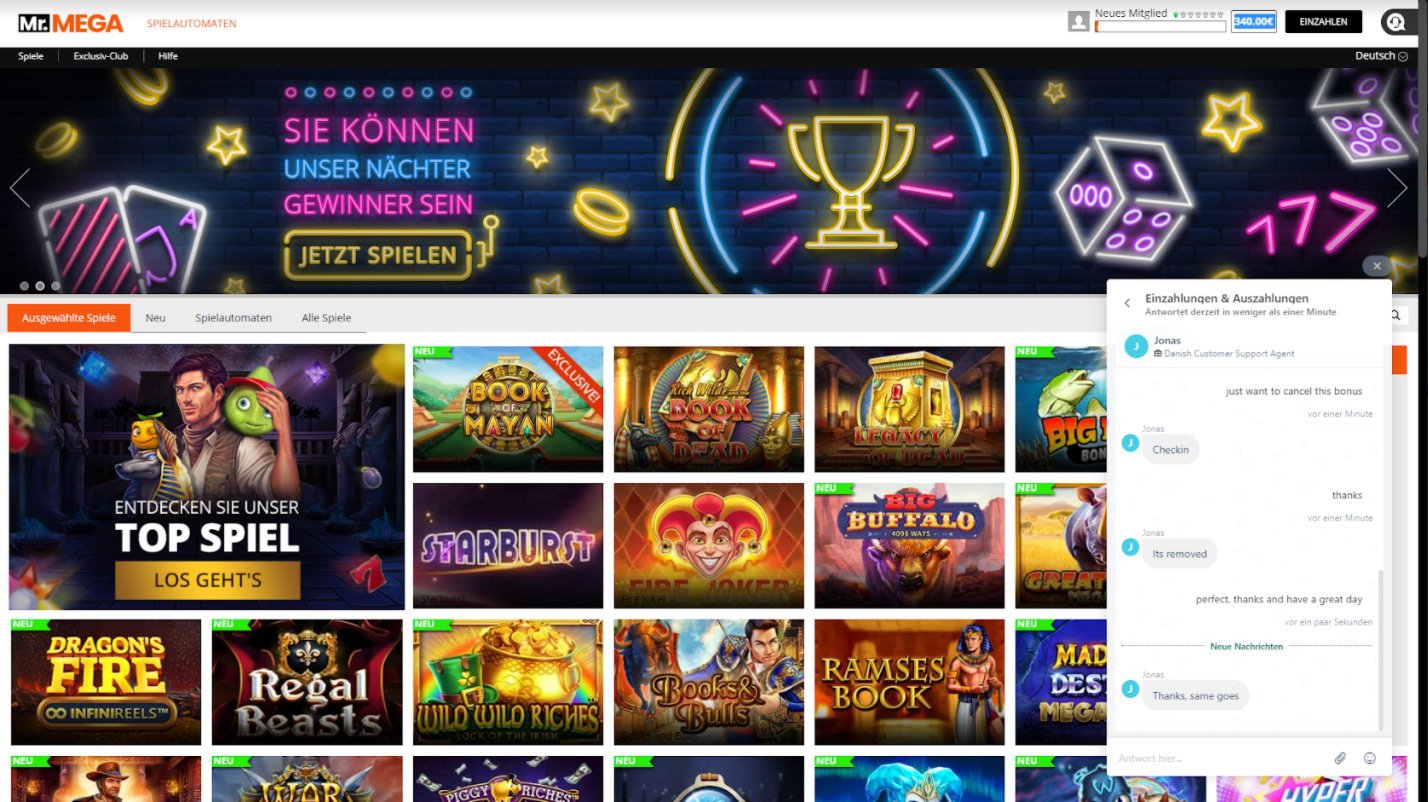 Later on, he went on to explore the lobby. Before that, he checked the account, where he discovered that the bonus was reversed. Our tester played three slot games in real money mode.

His first choice was a “Book of” adventure, namely Rich Wilde and the Book of Dead by Play’N GO. 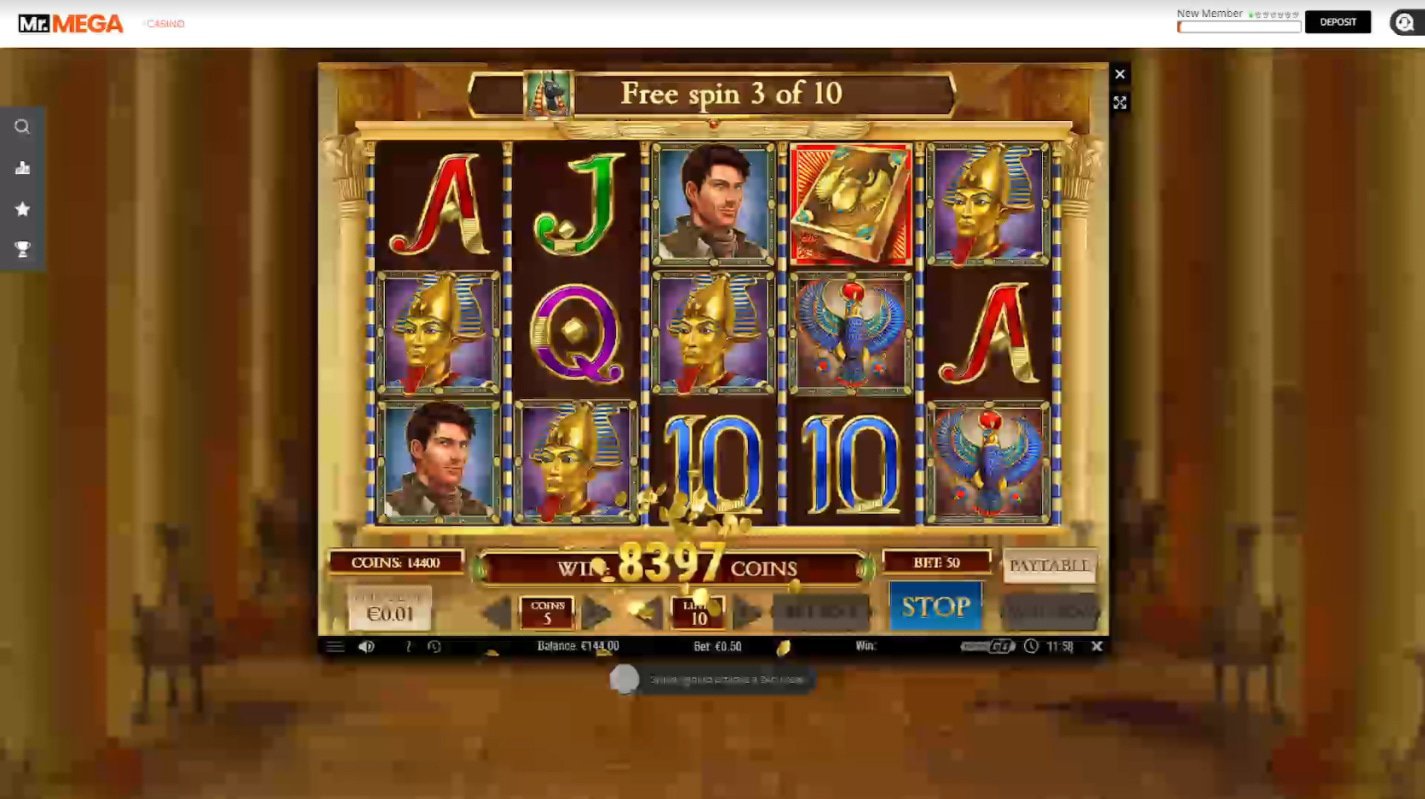 The next one was Cash Noire by NetEnt, featuring lots of action-packed symbols and 1024 ways. 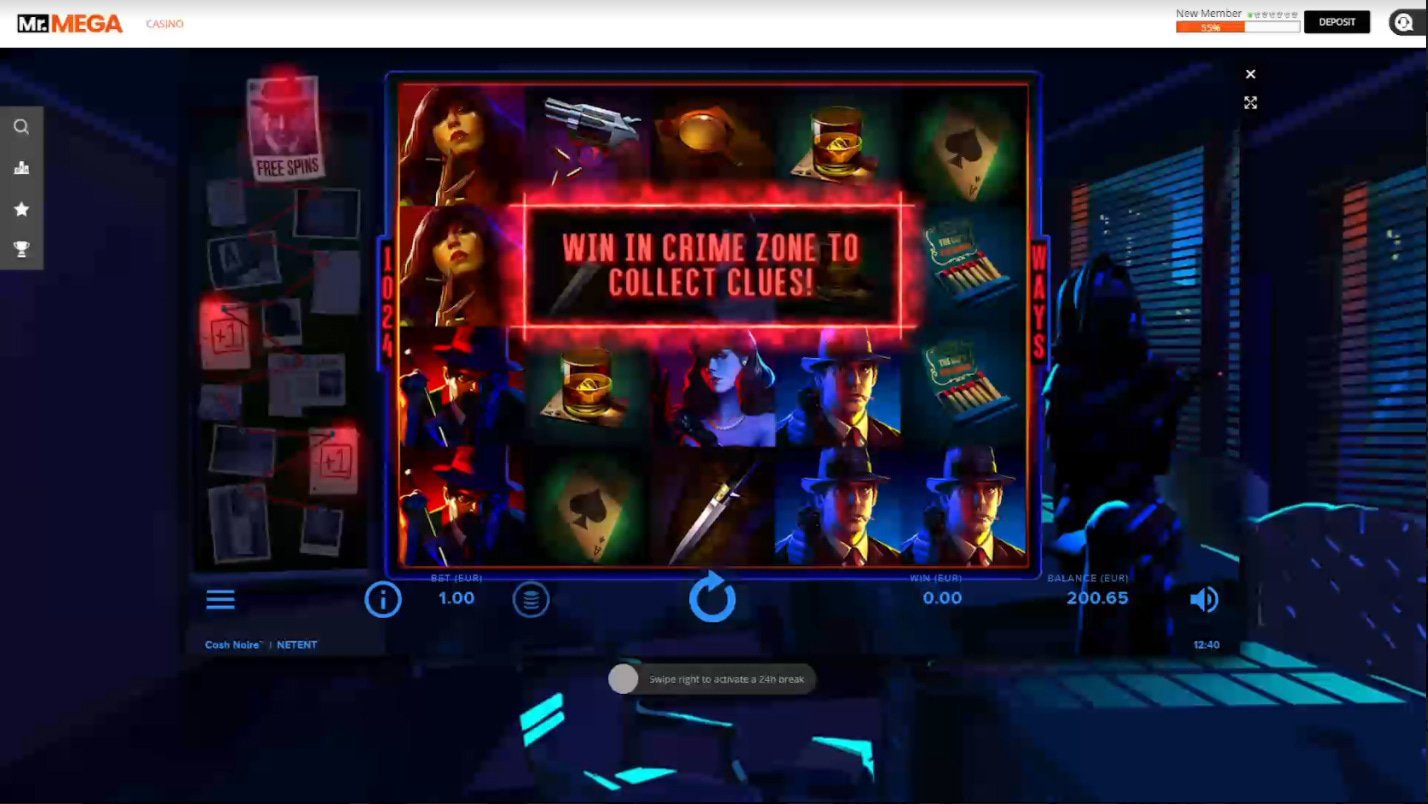 Finally, the last choice Big Bad Wolf by Quickspin is equipped with swooping symbols where winning icons are replaced by new ones, opening more winning opportunities on every spin. 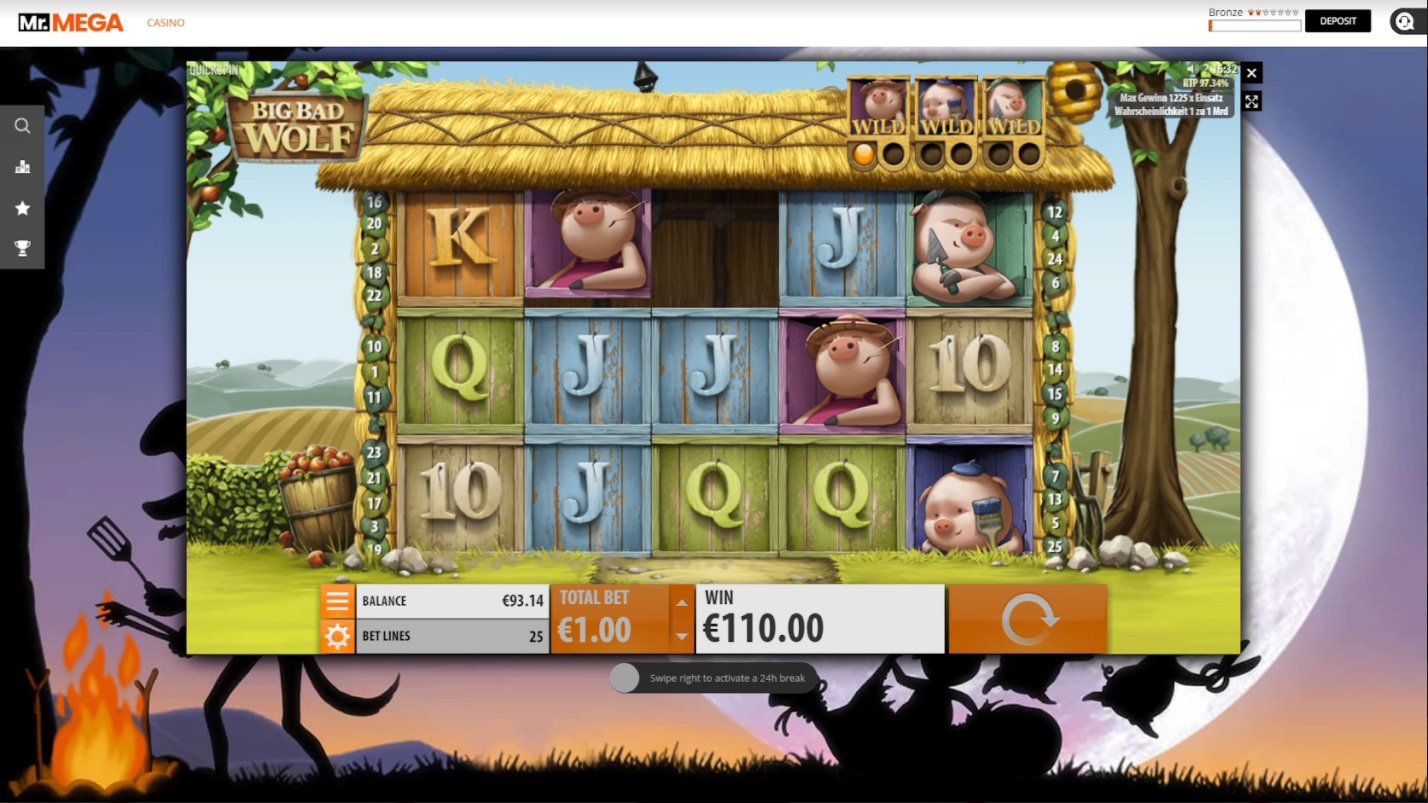 On April 14, the same day he registered, uploaded documents, and played games, at 08:09 PM he sent a cashout request- EUR 50 via MuchBetter. He used the same method as for depositing. A couple of minutes later, he checked the cashier, and the status was pending. Once again, he turned to live chat support to inquire about the status. 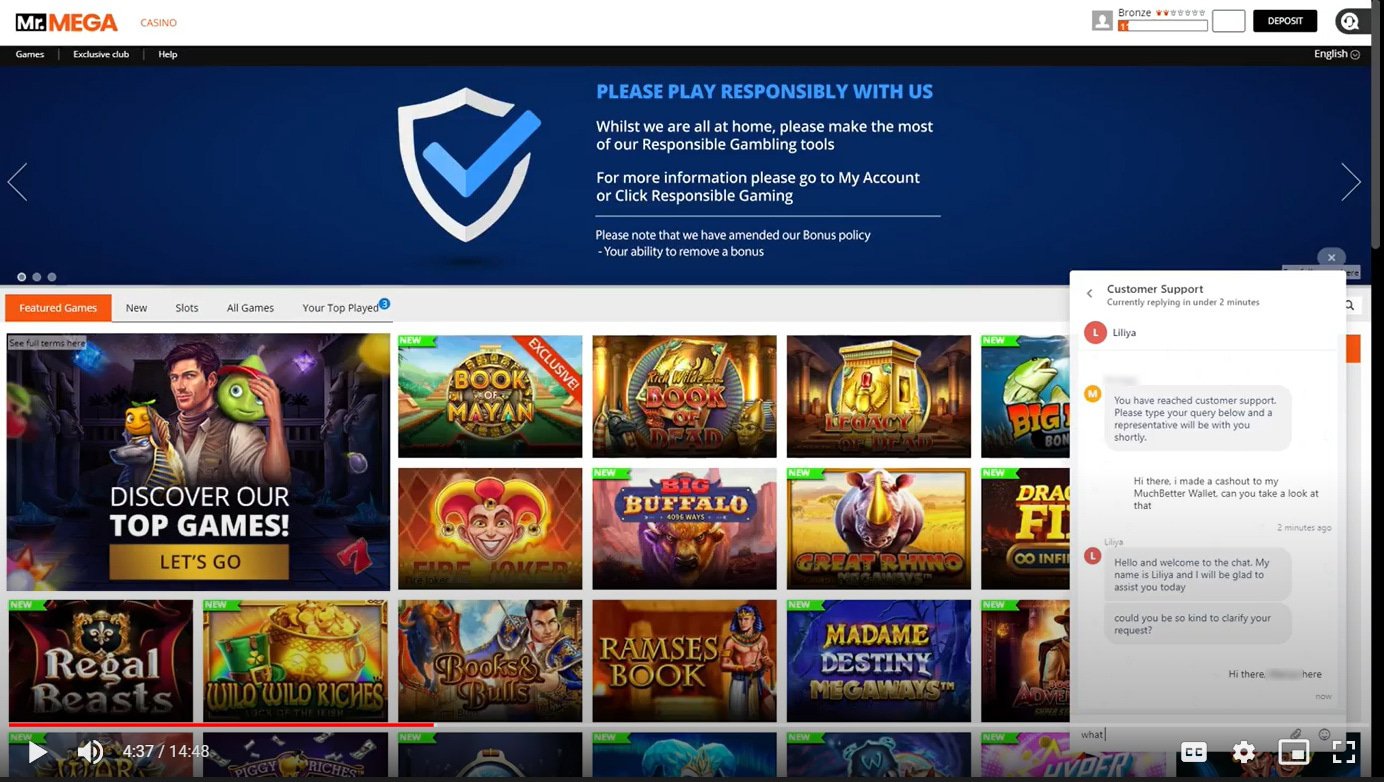 The agent responded two minutes later, informing the tester that it takes two working days to process the request, adding that he may be required to upload some documents, which he already did upon registration.

Here’s what the relevant section from official Terms says:

The next day, on April 15, at 02:20 pm, another confirmation arrived, stating that he received the desired amount. 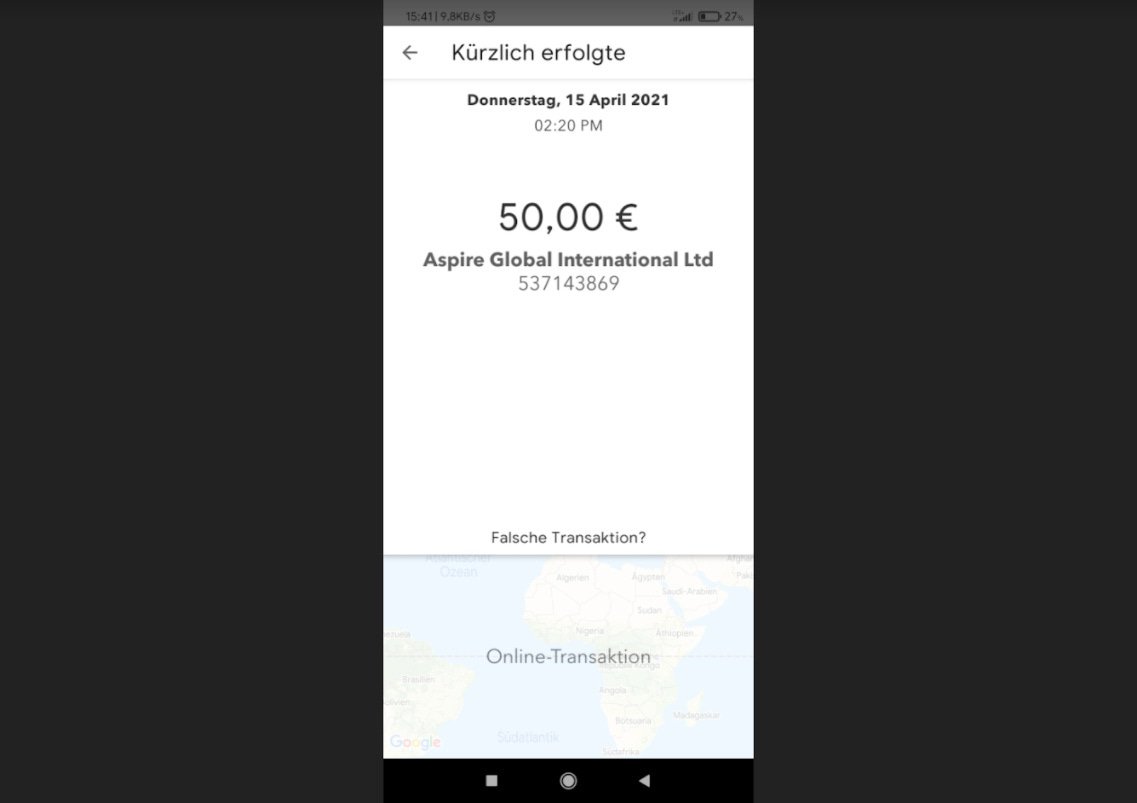 He also checked the cashier and saw that the request to cash out EUR 50 via MuchBetter was approved. So, it took 18 hours from the moment he made the withdrawal request for the money to reach his balance, which is within the stated timeframe. His documents had been approved during this 18-hour timeframe as well, even though he never received any information about the verification status.

As the live chat agent said, the venue reviews documents AFTER a withdrawal has been requested, regardless of when those documents were initially submitted. 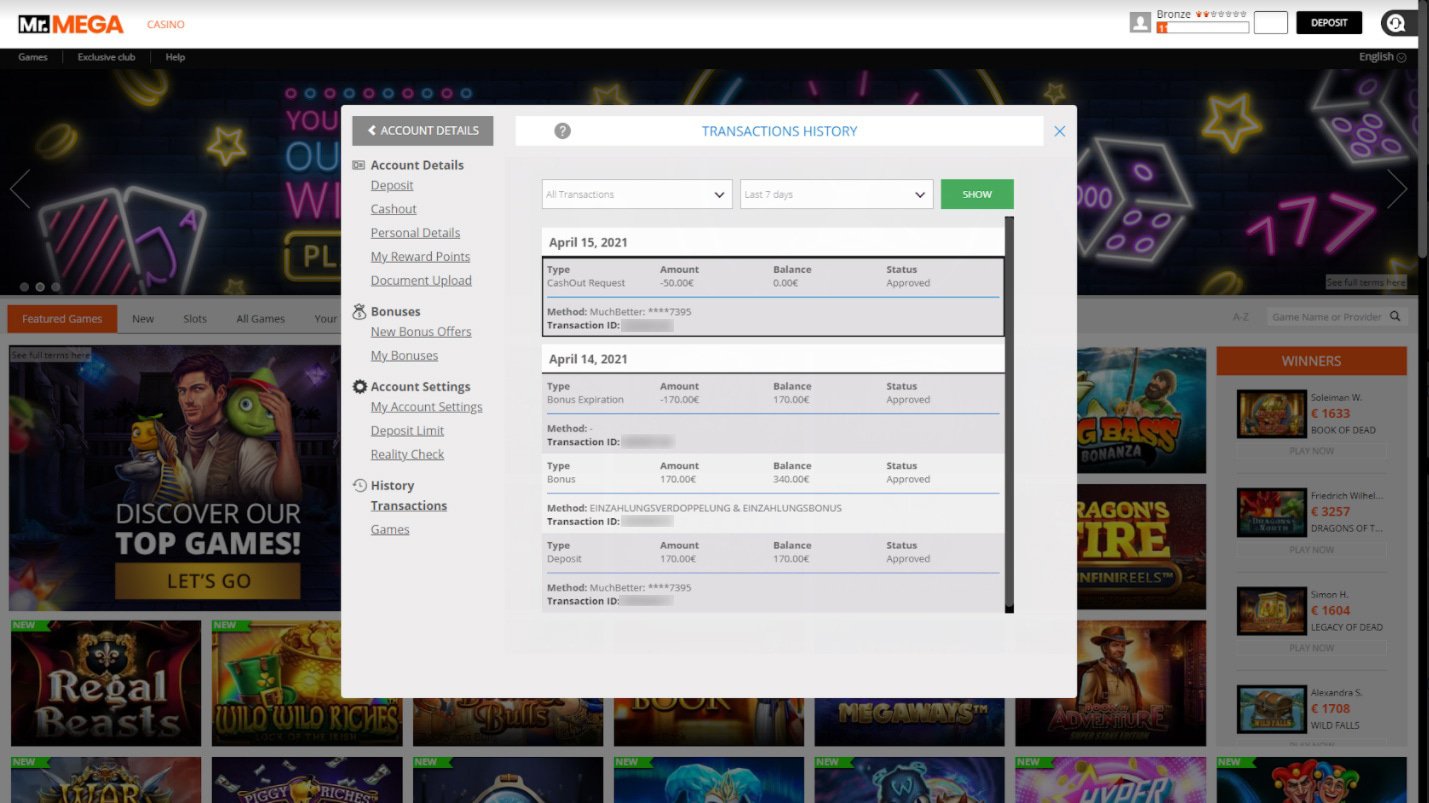 While the tester didn’t have any fees for either of the transactions, the official Terms state as follows:

“We reserve the right to charge you administrative fees during your deposits and withdrawals as shall be detailed in the "Cashier".”

The entire procedure, from registration to withdrawal in MrMega Casino, went by the book. There were some turbulences regarding the match deposit situation, which could have been solved even faster if live chat support was available 24/7, not only during limited hours.

Take time to go through other test reports where R0UNDER was the tester of the day as well:

Have you ever visited MrMega casino? What was your experience with it? Which hub would you like us to test next?

Hit the comments section below, and as always- don’t forget to read Terms and Conditions, gamble responsibly!

This issue with adding bonuses automatically should be fixed asap. Hope Mr Mega team will change this soon.

I agree with you Bubbles12, or to have the Customer Support Team at disposal at any time to provide assistance to the players. However, it's good to know the cashout procedure went well. Thanks R0UNDER and LCB for your assistance at any time :)

If a bonus is added automatically then customers need to have the option to remove the bonus by themselves...