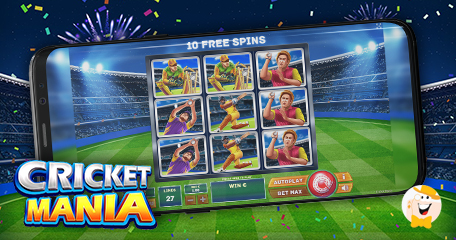 Are you a fan of cricket? If so, Tom Horn Gaming has got something for you. Dubbed Cricket Mania, the studio’s newest adventure is all about action and winning frenzy, as seen in the most vivid cricket competitions.

Unveiled on November 16, 2021, this online slot is home to high variance and a slightly lower return percentage of 94.84%. Paying tribute to the most beloved bat-and-ball game, this title accommodates a variety of features, which perfectly fit the entire concept.

Setting the reels in motion, punters await wilds and scatters to land and activate either expanding wilds or extra spins. Expanding wild is granted when a wild icon lands anywhere on the 2nd, 3rd, or 4th reel. Available in both base game and mode with complimentary spins, it serves as a replacement for all symbols except for scatters.

When at least seven scatters end up on the grid…

…bonus rounds are launched, allowing players to rotate the reels up to 20 times. The number of rounds varies based on the number of scatters which initially triggered the said feature. Worth adding is that during this mode, only high-paying symbols can appear on the reels, resulting in massive winning potential.

Finally, Cricket Mania by Tom Horn Gaming comes with both lines and ways, depending on the active mode. During the base game, 40 lines are active across five reels, while the bonus spin mode brings 3 reels with 27 win ways.

Hitting the shelves on November 2, 2021, Mine Mine Quest brought the most dynamic selection of features. One of them is Clusters Pay, where five or more matching symbols award a win. There’s Shatter mode and Shake up feature, both aimed to unlock more winning opportunities.

…punters collect low and high-paying icons which land on the respective chest on either side of the reels. When thirteen high symbols are acquired, the Giant symbol feature is activated, while thirteen low symbols initiate the Wild String.

A couple of days before unveiling this gold rush-inspired story, Tom Horn Gaming delivered Spacejammers, inviting punters to test the skills in the biggest space heist ever. Also equipped with Shatter mode, which continues until the winnings combos stop or when a consumer amounts to 4x multiplier.

The current month was marked with a significant strategic partnership as well. By penning a deal with Latvia-facing operator 11.lv, the producer got the chance to exhibit its products in the Baltics. Titles such as Gold X, The Secret of Ba, and 243 Crystal Fruits Reversed are some of the titles which went live following the agreement between two parties.

…the creative supplier revealed its Romanian entry after having acquired a Class II license. The certification was crowned with a content distribution deal with the leading operator MaxBet.ro. Thanks to this contract, local clientele can now explore flagship game 243 Crystal Fruits, classic-looking slots Flaming Fruit and Hot Blizzard, as well as The Secret of Ba or Sherlock. A Scandal in Bohemia.

I always really like Tom Horn Games! I'm looking forward to trying this one. Although I only have an account at one casino where I can play games from this developer. Hopefully they reach more sites in the future.

This one looks interesting, I've never seen a cricket-inspired slot before.

Wow, the atmosphere is amazing, as if I’m in the middle of a genuine cricket game.